It's All About the Process

Tweet
print
write a letter
Does anyone in Austin think a nationally respected planning firm can teach Austin a thing or two about inclusive public processes that work?

City Council has pushed back to April 23 its selection of a comprehensive planning consultant due to an outcry from some Austinites who want more input now. On March 4, three council members – Laura Morri­son, Randi Shade, and Lee Leffingwell – fielded comments from Austinites. They suggested questions for council to submit to the three finalist teams, led by ACP Vision­ing +Planning, HNTB, and Wallace Roberts & Todd. City staff covered the city's process to date. Leffingwell commented that it was important for communitywide comprehensive planning to get off on the right foot – and that it seemed the city hadn't done a very good job of that so far.

The biggest issue of concern was process. Specifically, how exactly will the community be engaged and included? Tim Mahoney, who advocates using representatives from five sectors of the city, asked for council to create a task force to vet the process. Mark Yznaga, representing Liveable City, submitted a list of nine questions for the consultant team and 10 for the city. ("Why didn't the city convene a community advisory committee before the consultant was chosen, as was done for the Envision Central Texas planning effort?") Much suspicion seemed directed toward local subconsultants – and their existing local ties and loyalties – and toward the city itself, rather than at the consulting firms.

Next steps: Council will cull a final list of questions and submit it to the finalists. Their answers will be publicly available March 27. A second public forum is set for April 7. (For more information: www.cityofaustin.org/planning/comp_plan.htm.) 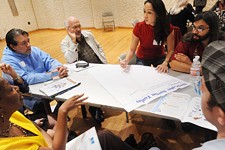