Stephen Truesdell, president of the Austin Firefighters Association, spoke against possible budget cuts at the Austin Fire Department. He was joined at the March 5 press conference by other firefighters and their families. (Photo by John Anderson)

• Fire Department Budget Cuts on Hold City Manager Marc Ott's proposal to cut Fire Department overtime by going from four- to three-person staffing on select engines has been put on hold. The solution, saving $200,000 in overtime, was presented as an alternative to cutting library hours in the face of a $20 million budget shortfall. However, pressure from the public; council members, including Mike Martinez; and firefighters themselves led to postponing the proposal. In a press conference prior to last week's council meeting, Austin Firefighters Association President Stephen Truesdell announced he was "very surprised to hear one of the first things proposed were cuts in Fire Department truck staffing." New Fire Chief Rhoda Mae Kerr stood with Ott at a press conference later that day when Ott announced he would delay implementing his "flexible staffing" changes. Noting his proposal would have only affected "one to three units out of the 50 to 60 on shift," he nonetheless said he would defer implementation to allow "opportunities for the community to provide feedback." Kerr said fire service would not have been compromised "by the very minimum amount [of cuts] we were talking about" but promised to proceed in taking public input. The format for public feedback is still being worked out. – Wells Dunbar

• Austin Loses More Jobs Some disquieting local economic indicators: The Texas Workforce Commission reports that the combined Austin/Round Rock area lost 12,800 jobs in January, raising unemployment to 6.4% locally. The Capital Area Workforce Development Board also pointed out in a press release that the leisure and hospitality industry, "normally one of the strongest sectors," hemorrhaged 3,100 jobs in January. Sounds like the hotel-stuffing South by Southwest can't get here soon enough. According to commission Chair Tom Pauken, "The national economic crisis is beginning to have a serious, negative impact on our Texas economy." – W.D. 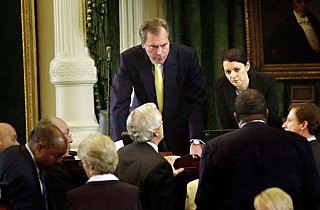 • Evolution debate comes to Allandale Give him credit for going into the lion's den: Jonathan Saenz of the Free Market Founda­tion, a leading proponent of teaching so-called "weaknesses" of evolution, made his case Saturday at an Allandale forum on that controversy, which has been big at the State Board of Education recently. The audience mostly complied with the moderator's request to be respectful – except for one guy who tried to seize control of the forum and called Saenz a liar – but by the end, it was clear that the patience of many (including some biology teachers) had worn thin with Saenz's not-quite-truthful claims. At one point, he waved a Zogby poll showing that 78% of Americans support teaching weaknesses – without explaining that the poll was commissioned (and the questions written) by the anti-evolution Discovery Institute. When an audience member called him out on it, Saenz defended himself by pointing out that the other side (the anti-religious-right Texas Freedom Network) had also used polls but neglected to say TFN's poll was of professional biologists. He also claimed that the drive to remove the "weaknesses" language had originated with TFN. The recommendation actually came from an SBOE-appointed panel of educators and scientists. "I guess he thinks we're the masterminds of a great conspiracy to take the language out," says TFN's Dan Quinn. "Great! I hope he tells our donors." – Lee Nichols

KGSR music director and midday host Susan Castle, KROX deejay Elliott Garstin, and KLBJ-AM city reporter Steven Pickering are among the casualties in Emmis Communi-cation's latest round of cuts. The struggling Indianapolis-based company whacked 7.5% of its staff last week, about 100 jobs. Local Emmis market manager Scott Gillmore wouldn't say how many of those jobs were in Austin but noted everyone received a "generous severance package." There were no jobs lost at Emmis property Texas Monthly, according to the publication's president, Evan Smith. But there are "possible cuts coming, as staff knows, depending on the outcome of first-quarter cash flow," he said in an e-mail. Of the cuts in Emmis' six local radio stations, the departures of Castle and Garstin will likely draw the most attention. Castle had been part of KGSR since it switched to its current contemporary folk/rock/country format in the Nineties. "Both are great folks who contributed a lot to our success," Gillmore said. At this point, it's "undetermined" how Emmis will fill those midday slots, he said, which means it's possible the stations will simply use recorded voice tracks. Pickering's departure represents yet another blow to the news-gathering capabilities of KLBJ, one of the few remaining news radio stations in the state. – Kevin Brass