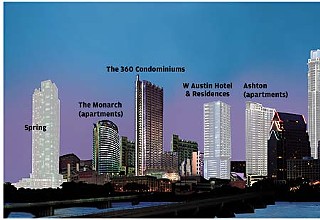 Skyline, revisited: This 2007 composite image from Austin Fit Magazine showed what Downtown would look like if all the high-rise projects then announced were built. (We ran it in our Oct. 5, 2007, issue.) For our 2009 status update: Buildings shown in gray are under construction; buildings that are white have been put on hold. (Photo courtesy of Austin Fit Magazine)

The Downtown skyline of any city is its most public face, emblematic of its prosperity, status, growth, and change.

In that context, Austin's new urban skyline – much like Lady Bird Lake or Zilker Park – belongs to the whole community. No matter which neighborhood or exurb people reside in, they notice and feel invested in the changes Downtown – most recently, the rising new residential towers. And because they're so prominent, the high-rises stir curiosity and strong emotions – ranging from excitement, dismay, and skepticism to lifestyle lust. As the most visible symbols of an evolving, prosperous Austin and Downtown, they're emotional lightning rods that intrigue newcomers and simultaneously alarm much of the old guard. 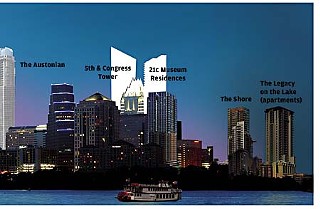 Now, with the national economy and the housing markets in financial meltdown, Aus­tin­ites are wondering about the luxury-condo and apartment-tower boom. Is it over? Is the densification of Downtown, as one remedy to suburban sprawl, on hold? Or is 2009 the ideal year to find a bargain and join the trend? While Austin's real estate market has weathered the recession better than those of many other cities, many wonder about the demand for all the luxury units under construction.

To get a sense of the current market dynamics, we talked to local representatives of the development teams behind major condo projects Downtown.

Taylor Andrews co-developed the 360 Condominiums, the virtually sold-out Novare-Andrews Urban tower that opened at 44 stories in 2008. (The team plans a similar tower, Ovation, and a mixed-use project with condos on Block 52, the site of the relocating Downtown post office.) The other developers interviewed represent the "big four" towers now under construction and scheduled to open by the end of 2010. They are Spring (Larry Warshaw and Perry Lorenz, Spring Austin Partners Ltd.), the Austonian (Terry Mitchell, a consultant to Benchmark Development, the Austin-based subsidiary of Spanish developer Grupo Villar Mir), W Austin Hotel & Residences (Beau Armstrong and Laurie Swan, Stratus Properties), and the Four Seasons Residences (Brett Denton and Art Carpenter with Ardent Residential). Each of these buildings has a distinct submarket, geographically and demographically. Sharing insights from a broker's perspective was Kevin Burns, CEO of UrbanSpace, which specializes in selling Downtown Austin residences, while other sources involved in the market contributed their perspectives, as well. 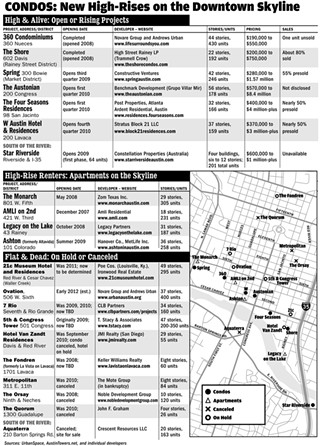 This particular dialogue with the developers focused specifically on the high-rise condo market and only on projects Downtown. Skyline watchers also will have spotted three new apartment towers that opened in 2008: AMLI on 2nd, the Monarch, and the Legacy on the Lake. The 18-story AMLI on 2nd opened with 231 units in December 2007 and is now 92% occupied. Open in May 2008, the 305-unit, 29-story Monarch reports being more than 70% occupied and 80% leased. Opened in October after the economic meltdown started, the 187-unit, 31-story Legacy on the Lake is only about 20% occupied. (It has been discounting units 18%; the smallest 653-square-foot one-bedroom leases for just under $1,200.) Now rising near City Hall is the 36-story Ashton; its large, upscale 258 units will open this summer. These rental options house a middle-income range of Downtown residents; a number of prospective condo buyers first try renting, to be sure they groove on high-rise life. Some market observers warn of an excess of new high-end apartments, with about 3,000 units now open or planned in and around Downtown.

The condo developers with projects still rising are the savvy, well-capitalized, and lucky ones; about an equal number of projects were weeded out by market forces and never broke ground. Not surprisingly, the survivors remain a bullish bunch – even facing a serious recession. "The biggest misperception is that Down­­town Austin is in this crisis with the rest of the nation," asserts Andrews. He points to how quickly the 360, Austin's largest Downtown high-rise ever, sold out last year – even as the national housing market went into a downward spiral. The projects are also filling their ground-floor retail spaces. The 360's are leased to locally opened cafes, the soon-to-open Garrido's restaurant, an art gallery, and a Blue Star grocery; one 13,000-plus-square-foot space now is for sale for close to $5 million. "We're coming off a really great year that has demonstrated demand beyond what anyone thought would be the case," said Andrews. "It's a testament to what a great city Austin is. We should consider ourselves very fortunate."