On Feb. 26, activists from across the state will gather at the Capit­ol to protest a mounting trend: U.S. Immigration and Customs Enforcement deputizing local cops as federal enforcers. According to a report released this week by the Border Network for Human Rights, ICE is piloting its national 287(g) program (the legal clause allowing the agency to pawn immigration enforcement downward) in Texas, namely in Harris Co. and north of Dallas, in Carrollton and Farmers Branch. Moreover, the Texas Legislature may make 287(g) statewide policy. Opposed by the Major Cities Chiefs Association, 287(g) targets noncriminal day laborers and traffic violators and forces local governments to foot the bill when ICE leaves detainees to languish in their jails, the report states. "We can't afford to sign a blank check to ICE," says Caroline Keating-Guerra of the Austin Immi­grant Rights Coalition. But Texas activists fear even worse: rampant detainee abuse, like that found in Phoenix, where the sheriff conducts "indiscriminate street 'sweeps' of Latinos" without evidence of criminal activity, then detains "hundreds ... in his 'Tent City' desert jail," according to the report. "The statute requires that ICE 'supervise and direct' all local partners," the report adds, "yet ICE has failed in this duty." – Patricia J. Ruland

On Feb. 22, the Austin Police Department implemented the so-called cite-and-release program, which authorizes police to forgo arresting individuals for certain misdemeanor offenses. The law allows an officer, under specific conditions, to decline to book a person into jail for initial processing, thereby saving time, money, and police manpower. The law does not eliminate the possibility of eventual jail time for the class A and B offenses covered. APD will implement the policy in both Hays and Travis counties. The Travis County Sheriff's Office – whose top cop, Sheriff Greg Hamil­ton, along with County Attorney David Escamilla, helped write the law in 2007 – has been using the option since late 2007. They say it has been a good way to keep deputies in the field. Notably, Williamson Co., into which a small portion of the city stretches, is not yet on board with the program, though APD Chief Art Acevedo said he hopes WilCo County Attorney Jana Duty will eventually agree to implement the measure. (WilCo District Attorney John Bradley has been outspoken against it; sources say that is what's holding up implementation, even though Bradley's primary duty is to prosecute felony crimes, not the misdemeanors covered by the new law.) For more, see "APD," July 25, 2008. – Jordan Smith

Bookstore for the Cash Poor

On Feb. 28, the Austin Public Library will open Recycled Reads, a store selling gently used items for $1 and $2 each at 5335 Burnet Rd. The stock – books, videos, record albums, and assorted media – will be donated or withdrawn from the library's collection. The all-volunteer staff will sell higher-priced collectables as well. Proceeds benefit the library system. As a "go green" effort, all unsold items will be donated to Books Beyond Borders (which assists schools and libraries in developing countries) or recycled into building material – so simpatico with the city's Zero Waste Plan. At the Saturday grand opening, festivities include Jon Dee Graham and Jesse Sublett performing literary tunes at 2:15pm. The store is open Tues­day, 10am-4pm; Thursday, 3-9pm; Saturday-Sunday, noon-5pm. To donate items, drop by or call 323-5123; to volunteer, call 974-7400. What a find for Austin's literary recessionistas! – Katherine Gregor

Dig Out Your Shovel

As It's My Park! Day approaches (Saturday, March 7), volunteering help by sprucing up city parks is more important than ever. With so many Parks & Recreation Department staff positions left unfilled due to city budget cuts, citizen shovel-wielders, tree-planters, trail-builders, and trash-pickers have become essential. Plus it's a fun day – why else would there be a exclamation mark in the title? The Austin Parks Foundation is seeking 1,600 volunteers for its seventh annual event. For a complete list of the more than 40 projects (searchable by ZIP code), visit www.austinparks.org, and sign up. Plant native Texas shrubs by a senior center, help install a playscape, or mulch trees to protect them from the drought. Volunteers can come for one hour or several; all get T-shirts, drinks and snacks, plenty of exercise, and a warm glow of satisfaction. In 2008, more than 1,550 volunteers worked on 43 Austin Parks Foundation park improvement projects, donating more than $60,000 worth of labor and materials in one day to the city parks system. – Katherine Gregor 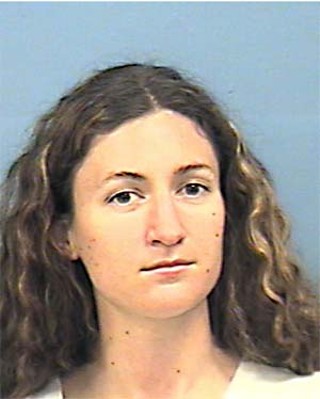 A second arrest was made in the case of accused bicycle burglar James Clayton, who was arrested Feb. 3 and charged with boosting several high-end mountain and road bikes. Clayton's reported girlfriend, 29-year-old Layne Severson (pictured), was arrested last Thursday and charged with felony money laundering after Austin police discovered that proceeds from the online sale of bikes stolen by Clayton were being deposited into a PayPal account connected to Severson's checking account. Detective Scott Askew said three complete bikes and nearly 20 disassembled bikes have been recovered from Clayton's residence and a rented storage locker so far. Police say Clayton frequented local bike racing events, befriended individuals within that community, and then burglarized them. When bike culture blog Austin Texas Bike Stuff (www.atxbs.com) reposted a Craigslist ad accusing Clayton of bike theft last December, Severson was the first to reply in Clayton's defense, according to blogger Jason Abels. Askew said a tip on another possible accomplice is being investigated. – Daniel Mottola