Tweet
print
write a letter
According to CSI: Miami, all it takes to make a badass forensic scientist is a pair of dark shades, a white pantsuit, a colorized setting, and an ability to return all test results with solid scientific certainty within an hour.

In real life, of course, things are far less certain – which, according to a new study released last week by the National Acade­mies, holds true for the state of forensic science in general. Forensic labs are not all created equal, according to the report, the result of two years of study by the National Acade­mies' Committee on Science, Technology, and Law, which reports that how labs are funded and staffed and the degree to which they are subject to oversight varies greatly from jurisdiction to jurisdiction.

Moreover, neither are all forensic disciplines created equal: With the singular exception of DNA analysis, "no forensic method" – such as fingerprint, tool-mark, or bite-mark analysis – "has been rigorously shown to have the capacity to consistently, and with a high degree of certainty, demonstrate a connection between evidence and a specific individual or source," reads the report. "The simple reality is that the interpretation of forensic evidence is not always based on scientific studies to determine its validity. This is a serious problem." Especially if you're the one accused of the crime.

Indeed, the National Academies report concludes that while DNA analysis has been integral to either matching or eliminating a suspect's connection to a crime, the field's shortcomings have also been implicated in miscarriages of justice: "[I]n some cases, substantive information and testimony based on faulty forensic science analyses may have contributed to wrongful convictions of innocent people," reads the report. "This fact has demonstrated the potential danger of giving undue weight to evidence and testimony derived from interpretive testing and analysis. Moreover, imprecise or exaggerated expert testimony has sometimes contributed to the admission of erroneous or misleading evidence." 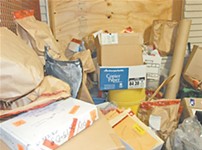 Where's Your Evidence?
Advances in forensic science have made physical evidence increasingly crucial in criminal justice – but the practice of preserving and maintaining that evidence is often underfunded, poorly managed, or just plain sloppy