Bringing the Group to the Vision

As Pat Forgione prepares to say farewell, he looks back on his AISD decade 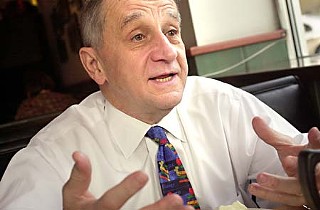 Arranging an interview with Austin Independent School District Super­intendent Pat Forgione is surprisingly difficult. Not because he's a recluse: Anyone who's worked with Forgione will tell you how affable and talkative he can be. It's just that, even in these final four months before his June 30 retirement, he's still a workaholic. The only slab of time he had for a real sit-down was a breakfast meeting (a biscuit and two eggs, over easy – "I'm on a low-carb diet") at the Water­loo Ice House on Lamar, just around the corner from his AISD offices on Sixth: a building and institution that has been defined by his 10-year tenure.

When he discusses his greatest regret, he pauses quietly for a moment. It's not how he handled the headline administrative dustups at Kealing Middle School or the potential closing and cliffhanger survival of Webb Middle School, nor even that Johnston High School went through three major overhauls before becoming terminally entangled in the trip wires of state academic nonattainment status. It's not even the occasionally rocky relationship with the community, parts of which have accused him of everything from callousness to incompetence to that old mantra of "just not Austin enough."

It's one name: Ortralla Mosley, the 15-year-old Reagan High student stabbed to death in a school hallway in 2003 by ex-boyfriend Marcus McTear. Of Mosley, he said: "Losing that child on my watch, that was the hardest thing that ever hit me. To this day, I can't articulate it." But he also pauses over McTear and his self-destroyed potential. "To lose that young man, a great young man that did something very bad."

It's a rare moment of public emotion from the AISD chief. He's usually portrayed as the numbers guy – the Stanford Ph.D. and policy analyst who endlessly pores over attainment charts and environmental studies. He's become famous for prefacing any statement with an old reference to the TV show Dragnet: "I'm like Jack Webb – just the facts."

Less often discussed, and less public, is the ex-seminarian who mopped hospital floors and worked the Pratt & Whitney production line before becoming a high school social studies teacher in inner-city Baltimore. That closer-to-the-ground experience could be what has shaped his approach to how public schools should work and their roles in the community. "Effort creates intelligence," he often says. "If you work hard and you develop and you have mentors and are supported, you can become smart."

The district's response to the death of Mosley is a vivid example of Forgione's philosophy as AISD's CEO and how he's tried to never stop learning. After the initial shock and pain, it was his job to move on quickly and create policy. What he didn't do was the knee-jerk punitive approach that has often pervaded Texas education policy. "I don't want to put metal detectors in my schools," he said. "That would make them prisonlike."

Instead, he looked at underlying problems: in this case, domestic violence. The first question, he said, was "how do we get our kids to go to counselors earlier?" His strategy was to get community involvement and community leaders to work with him on a safety task force. "We didn't only do cameras and locks and lights. That's easy. They helped me with a dress code for my teachers and my students. They helped me bring a character course into my district. They helped me think about the kind of social services I need in my district."

In a time when public schools have been blamed for all the ills of American society, Forgione has remained a constant advocate for Austinites to keep their kids in his public schools. "I believe in redemption," he said. "I'll give you a second and third chance, but I want to see progress."

So has AISD seen progress under Forgione's administration? 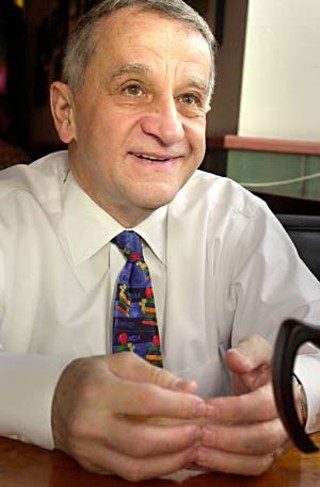 For all the perennial insistence by teachers' groups that a superintendent should be an educator, the district hired then-U.S. Com­mis­sioner of Education Statistics Forgione in 1999 exactly because he was a data guy. "When I got off the airplane, you could go to the [arrival] gates in those days, and someone held up a pad. It was the Statesman saying, 'Austin Unacceptable.' We were the first school district to be held unacceptable for poor data, and we'd been sued and indicted. So someone said, 'Dr. For­gione, what does this mean to you?' and I said, 'Well, I guess the honeymoon is over.'"

Forgione has always had a reputation as a systems and infrastructure guy. His mantra for his first two years was simple: "Better data, better collaboration, better student achievement." After arriving from the National Center for Education Statistics in D.C., he immediately set about repairing the district's poor records systems, creating a new data warehouse. More than that, he said, the first two years were about "breaking this culture of avoidance, low risk, and some poor behavior and judgment."

But he quickly realized that "this is the People's Republic of Austin" and that being a superintendent here means there's never enough openness, no matter how hard he tried. "I really learned how difficult it is to put all the elements together to create quality learning. I thought I knew from my testing days. I'd measured it, developed some of the most outstanding systems when I was in the federal government, developed some of the most elegant databases and tests. But until you do this stuff at the ground level, it's really different."

Forgione would like his legacy to be measured against two metrics: where the district was 10 years ago and where other major urban districts are now. In 1999, the debacle over discredited Superintendent Jim Fox left AISD rudderless and led to an effective purge of the board of trustees in that year's elections. Today in Fort Worth, the middle class has abandoned the public school system except for magnet schools, and Dallas Independent School District is effectively bankrupt because of mismanagement. In AISD, Forgione said, "I believe the public now has confidence in trusting their children to us. Some of that has come from bringing more uniformity to what we do, but some of it came from bringing more diversity to what we do, like the Ann Richards School and our international school for recent immigrants." His highest performance accomplishment, he said, "is that I think I changed the brand. Now it's a reasonable brand."

His biggest management achievement, he believes, is not that he led the district but that he created a team that has guided the whole district. "It hasn't been me. Most of my team has been here eight years," he said. He even declined credit for that, placing the praise with former Chief Financial Officer Lar­ry Throm, who recently moved to Dallas ISD to fix its broken finances. "He's the best backroom guy you can have, and he's built a team that's staying here."

While Forgione's relationship with teachers has often been rocky ("It comes with the job," he says), there's a visible excitement when he talks about teachers, especially the latest 34 employees to get national certification and the fact that AISD can recruit from across the nation. His greatest pride is in his students: In the latest Texas Assessment of Knowledge and Skills results, AISD closed the achievement gaps among student groups faster than the state average, and in the latest Trial Urban District Assessment, the district's eighth-graders were above the national average at math. "Suburbs do that, not urban districts," he said. "We have data today that our 9-year-olds are better at math and reading than they were in 1968. But today the expectations are higher."

For all the public meetings, task forces, and long Monday night board meetings that stressed personal contact, Forgione still believes testing and standards are important. He believes it's just that the state's emphasis is in the wrong place, a judgment he says has been re-enforced by the traumatic Johnston repurposing. "I don't believe you have to make everything the highest stakes. That one [accountability matrix] cell out of 25 can put a school in jeopardy; that's not fair." He's clear on what the educational priorities should be. "Tell me what college readiness is. Team-build­ing. Dili­gence. Problem-solving. Cooperation. You show me a multiple-choice test that can do any of those, and you'll make a million dollars."

He's also proud of the fact that he's managed to balance tight school funds ("We just got an AA-plus bond rating. When I first came here, we were on negative watch by Moody") with meeting the needs of students with special needs and the district's large minority population, often spending twice as much money at the poorer and more ethnically diverse schools than the whiter, more middle-class schools. "I don't know if twice is enough, but some urban districts that have some white students spend twice as much on the white schools, because they're trying to keep those students. We don't do that, because we believe in equity and excellence."

The Next Super and the Former Super

So where now for Forgione? His big promise is that, while he won't be leaving Austin, he's not going to become an armchair superintendent, second-guessing his replacement. He'll be quitting every board that he currently sits on and promises that, while he'll always make himself available to the district, he's never called any of his old offices back. He was even shy about offering specific advice, restricting himself instead to an aphorism coined by University of Texas President Bill Powers: "There are big rocks out there and small rocks, and you have to figure out which rocks you can fit into your bucket and how many."

When it comes to picking that replacement, Forgione has stayed out of the process. "I think initially the board wanted to find someone just like me, but I think they realized that's not the endgame. The endgame is to find the person to lift the big rocks, and their challenge is to work with the board to work out which rocks to lift."

He now gets to reprioritize his life. Although retirement won't really mean retirement (he expects to make a career announcement in the next few weeks), he's adapting. He gleefully pulled out his new iPhone and talked excitedly about how he finally has a private e-mail account. "I was worried, because I'm a collaborative worker, and I'm not going to have a team come July 1. I was worried, can I find a team and stay connected?" Now he's texting his daughter-in-law, who is pregnant with his first grandchild. "Psychologically, it's made me feel connected."

That's the biggest advice he leaves for his successor: Connection counts. He leans across the table and explains the biggest lesson that AISD taught him. "What you gotta be careful of in Austin," he said, "you gotta bring the group to your vision."