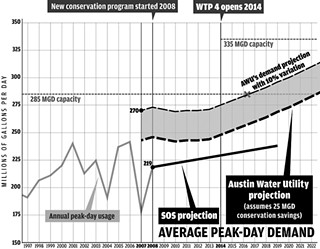 How Much Water Will We Need?:

The Save Our Springs Alliance and other groups are promoting a lowered peak-day use projection as an argument for delaying work on Water Treatment Plant No. 4. The key question: In what year will we exceed current system capacity of 285 MGD and thus need WTP 4?

Phase I (adding 50 MGD capacity) is on a construction schedule to be completed by 2014.

Austin Water Utility projections start from a theoretical 270 MGD in 2007. That reflects a 10% variation from an average peak demand line that starts at 240 MGD, the historical high from 2001 and 2006.

With conservation savings keeping usage roughly level for the next four years, AWU projections show us hitting 285 MGD system capacity by about 2016. Opening WTP 4 before that would allow the city’s other, old plants to close for renovations.

SOS starts its projections at 219 MGD, the peak use in 2008, the first year of the city’s new water-conservation program. That’s a truer average, they say, and even allowing for a 10% variation on top of that, we won’t need additional capacity until well past 2020.

A coalition of environmental groups has again taken aim at WTP 4, asking council to halt construction. Though the fight is familiar, it's been freshened up with a new rationale tied to the city's 2008 success in water conservation.

A long Dec. 11 letter to council lays out the latest reasons why the city should forestall WTP 4. Signatories to the letter represent eight local environmental groups. WTP 4 Phase I is scheduled to open in 2014, drawing from Lake Travis to add 50 million gallons per day to the city's current water-treatment capacity. The core of the enviros' argument: With conservation working, we won't need that additional capacity until far after 2020, so why not ice the $494 million project for at least three to five years? The advantages cited: Keep customer rates lower (by delaying the need to pay off an estimated $400 million in additional bond debt), benefit from wisdom in the city's upcoming comprehensive plan for growth, and – most important to this group – keep the focus and the pressure on water conservation. If council commits to living as long as possible within our current water-treatment "means" of 285 MGD, goes the argument, we're more likely to conserve the most water.

City policy already requires conservation, but could be made stricter. Aggressive water conservation can help achieve Austin Cli­mate Protection Plan goals of saving energy (used heavily in the pumping and treatment of water) and thus significantly reduce the city's greenhouse-gas emissions. So if we increase our water-treatment capacity, runs the argument, residents will inevitably use more water.

The city's water-conservation program (chiefly new mandatory lawn and landscape watering restrictions) successfully reduced usage by so much last year, the enviro alliance says, that the city should now change all of its water-demand forecasting. The alliance asked council to establish new policy based on a key 2008 figure: 219 MGD peak-day consumption. (That's the single day on which the most water is pumped/consumed – usually in August.) To date, the city has used projections based on an average peak-day demand of 240 MGD – the historic high hit in 2001 and 2006. Adding a 10% safety buffer to allow for seasonal variations, additional pumpage, and other factors, AWU's current projections start from 270 MGD in 2007 (see "How Much Water Will We Need?" above). The Save Our Springs Alliance argues we should base projections instead on average peak demand of 219 MGD, on the assumption that the new city restrictions have permanently reduced use. Extending the same projections forward, the city then would not hit its system capacity of 285 MGD (even with the 10% "safety buffer") until well past 2020. The activists also argue that if the city would contain the "peak" by more strictly curtailing water use on the hottest summer days, all projections could be rolled back even further.

It will take about five years to build the first phase of WTP 4. Given last year's success, SOS and others want the city to freeze the initial design, planning, and preliminary engineering work scheduled to start this year. In a few more years, they point out, we'll have far better data on water-conservation results. Meanwhile, the water-conservation program could be made even stronger, saving more water and further lowering demand projections.

What do we have to lose by waiting?

Austin Water Utility Director Greg Meszar­os bluntly rejects the equation of WTP 4 Phase I construction with a lack of city commitment to water conservation. He believes the new plant's construction will have no dampening effect on water conservation, and he stressed that the city has committed only to build Phase I, which in fact will replace the 42 MGD lost when the 83-year-old Green Water Treatment Plant was decommissioned in December. (The initial intake tunnel and infrastructure investment will allow the plant to be expanded, far into the future, as aging plants expire and Austin grows.) As evidence of AWU's strong commitment to water conservation, he pointed to last year's resounding success: "We asked our community to do a lot, and it has responded in a great way."

Austin Water Utility is on schedule to implement a council-mandated menu of additional water-conservation measures for the next decade. Under Daryl Slusher, who assumed the new post of assistant director of environmental affairs and conservation in 2007, water conservation has become a top AWU strategic goal, said Meszaros. Long defined by an engineering mindset, AWU staffers have a growing environmental ethos.

The director cited a number of pragmatic reasons to build WTP 4 now. The city now has just two plants, Ullrich and Davis, which opened in 1969 and 1954, respectively; Davis in particular is sorely in need of rehabilitation, and neither can be expanded. AWU needs some redundancy in the system – more water-treatment capacity than it uses – so that it can "take down" part of an old plant for repairs, said Meszaros. Those Sixties-era plants aren't energy-efficient, and they're not going to last forever. AWU has a responsibility to ensure Austin's adequate water supply 25, 50, 100 years into the future. Even if the full 50 MGD from WTP 4 aren't needed until 2025 – as Meszaros said he hopes – he needs redundancy soon.

Another AWU concern: Davis and Ullrich draw water from the Colorado River. WTP 4 will draw from Lake Travis. That's a cleaner, deeper source, said Meszaros; using it will reduce water-draw from the river, which more directly impacts wildlife and ecosystems downstream. And if the Lower Colorado River Authority has oversold rights to the Colorado, that could lead to big rate increases from that source in the future.

As for rate increases from financing WTP 4, Meszaros anticipates 10% to 12% total over the next five to six years or about 2% annually, over and above another 4.5% in rate increases projected over the same period. (An average homeowner pays Austin Water Utility $61.67 a month* for water and wastewater.) But the actual WTP 4 cost could go down, especially for contracts signed in the next year, because in the current economy, construction bids are coming in lower, and utility bond interest rates have dropped.

Austin Water Utility turns a profit on every gallon of water sold, generating essential revenues for the city's hard-pressed General Fund. Nonethe­less, said Meszaros, "there are some real business drivers for us to pursue water conservation." The city has contracted with LCRA to buy its raw water through 2050. But from 2020 to 2025, the price rises substantially, as water usage increases and hits predetermined triggers. "Each year we can delay that, we'll realize $10 [million] to $12 million of savings annually," said Meszaros. "If we can postpone purchasing additional raw water by decades, we can save hundreds of millions." The utility is redoing its rate design to encourage additional conservation by the biggest water users, probably starting in 2010.

Meszaros and Slusher also point to the significant cut in greenhouse-gas emissions as a result of WTP 4. Projections for fiscal year 2014-2015 (its first full year of operation) show that opening WTP 4 will immediately shrink the utility's greenhouse-gas emissions by about 13.5%. The site is at a higher elevation; that substantially reduces the energy required to pump water. "The number one thing the utility can do to reduce our greenhouse gases is to open WTP 4, which will cut about 10,000 to 15,000 metric tons a year – even pumping the same amount of water we do today," asserted Meszaros. (AWU has not calculated the greenhouse-gas emissions of building WTP 4, nor has it run parallel numbers on greenhouse-gas reductions from water conservation, but standard estimates reflect that 1.2 to 1.3 metric tons of greenhouse-gas savings are achieved with every million gallons of water or treated wastewater conserved.)

All agree that conservation is the most cost-effective way to extend water resources. Council Member Lee Leffingwell – who chairs the Citizens Water Conservation Imple­ment­ation Task Force – said he remains convinced that the city got the most stringent water-conservation rules it could at the time – and it certainly can keep pushing. There is a public motivation problem: Through LCRA, Austin has excellent access to water for decades to come, unlike more water-restrictive cities such as Phoenix and Las Vegas or even nearby San Antonio. "It's a lot easier to sell conservation when you can say, 'We just don't have the water,'" Leffingwell noted.

Council must also consider other economic effects. WTP 4 Phase I is exactly the kind of "shovel-ready" infrastructure project that the Obama administration advocates for 2009 in this serious recession. If council froze the additional $400 million now for design, consulting, and construction contracts, it would be another hit to the Austin economy and job market. Given that context, in addition to other AWU considerations, council would hesitate to delay the project.

The early 2009 council has signaled its willingness to move forward. New members Laura Morrison and Randi Shade said recently that they were excited about the conservation results, but neither would advocate a project halt without further analysis and data.

Rather than trying to hold the "no-build" front, environmental organizations might more wisely move to a "don't expand" stance on WTP 4 – then work enthusiastically with the city to help spread its water-conservation gospel. Meszaros argues that AWU needs and deserves collaboration, not solely criticism. Only one thing will change the city's expansion plans: good, hard data for several years showing that water conservation is working well. That's within the community's power to produce, one faucet and yard at a time.

*Due to an editing error, this passage originally read $61.67 a year.