In clearing Timothy Cole's name, Travis Co. judge does what Lubbock officials refused to do

Weeping on the witness stand Feb. 5, Ruby Session said she remembers the last time she held her son. It was 1986, and she was sitting on a floor with her 26-year-old son, Timothy Cole, rocking him in her arms, as he wondered aloud how it could be that he had just been convicted of the rape of Michelle Mallin – a rape he did not commit. Indeed, DNA testing conducted last year proved that Lubbock Co. police got the wrong man. The real culprit, Jerry Wayne Johnson, is already in prison, serving life for two other rapes. The revelation came too late to free Cole, however, who died in prison in 1999. But on Friday afternoon, Travis Co. District Judge Charlie Baird formally exonerated Cole – setting free, at least, his name and reputation. According to the Innocence Project of Texas, it is the first posthumous exoneration in Texas history. "I find that Tim­othy Cole's reputation was wrongly injured, that his reputation must be restored, and that his good name must be vindicated," Baird said. "I find that Timothy Cole shall be and is hereby exonerated."

The unusual court session came after the Lubbock courts rejected, without explanation, the Innocence Project's request for a court of inquiry into the case there, said Jeff Black­burn, the project's chief counsel. The law says that courts must be open to all Texans and that such post-conviction proceedings can be filed in any court, so Blackburn brought the case to Austin. "In Texas, when a county won't fix a problem, what do you do?" he asked in October, when the request for a hearing was first filed. "You go to the capital."

Cole was convicted of the 1985 rape, one of five similar rapes committed over a four-month period near the campus of Texas Tech University. Although Mallin gave detailed information regarding her attacker – importantly, that he was a chain smoker who'd used her car lighter without wearing gloves and had left a cigarette butt that she had not touched, that he was wearing a yellow terry-cloth shirt, and had taken from her a small diamond ring her mother had given to her – the police instead quickly focused on Cole, a Texas Tech student living with his brother Reggie Kennard in a garage-style apartment. Kennard told the court last Thursday that police came to the apartment for the first time after Cole reported that he had been the victim of a robbery a few nights before. Inexplicably, the cops brought a Polaroid camera and snapped shots of Cole that Kennard remembers them saying would be helpful as they searched for the robber. Before long, however, one of those photos was used in a poorly constructed photo lineup, from which Mallin identified Cole – the only color photo in the bunch and the only non-mug shot among six photos – as the person she thought had abducted her from a parking lot across the street from her dorm, held her at knifepoint, and raped her.

Kennard and friends provided Cole a perfect alibi – he was home studying the night Mallin was raped – but in court, Kennard said, the prosecutor made him sound like a thug who would do anything to get his brother off. Prosecutors had even offered Cole probation if he'd just plead guilty, but Cole refused: He would not confess to something he did not do, said his mother. He told her later that he "would rather spend his life in prison as a convicted rapist than to live on the outside as a registered sex offender," she said. "And I was proud of him." In the end, Cole was given 25 years in prison, which for him would become a death sentence. He died in prison from complications with asthma exacerbated by prison officials' insistence that he work outside in the cotton fields. 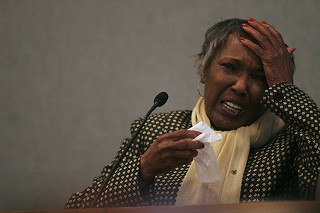 It is unlikely that Cole's name would have been cleared had the real rapist, Jerry Wayne Johnson, not come forward. In fact, Johnson first wrote to Lubbock Co. officials in 1995, just after the statute of limitations had run out. His letter to Judge Jim Bob Darnell, who in 1986 was an assistant district attorney who prosecuted Cole, was ignored. It wasn't until 2007, when Johnson again began writing letters, this time to Lubbock's daily paper and to Blackburn at the Innocence Project, that an investigation into the case began. Among the "serious flaws" that Blackburn said they found were those of the eyewitness identification procedures that led Mallin to finger the wrong man as a suspect.

Blackburn was joined in Baird's court last week by Barry Scheck, Cardozo School of Law-based Innocence Project co-director; they also led a round of lobbying at the Capitol on Feb. 6, calling for reforms to eyewitness ID procedures. (For more on this, see "APD Scores Low on Police Lineup Procedures," Nov. 28, 2008.)

Unheeding, Lubbock police also apparently ignored – or destroyed – other evidence that would have steered them away from Cole. Cole was an asthmatic and the actual rapist a chain smoker, for example, and, notably, police secured a fingerprint from the cigarette lighter in Mallin's car, but then destroyed it. Mallin, who joined with Cole's family to ask that he be exonerated of her rape, testified in court Thursday. She said she was stunned when she first heard that Cole had asthma: "I told [the police] he smoked," she said. "I never dreamed they'd come up with an asthmatic."

Ultimately, DNA proved definitively that Cole did not rape Mallin. Had Judge Darnell paid attention to the letter he received from Johnson in 1995, says Blackburn, it is likely that Cole would still be alive. Apparently that didn't impress Lubbock officials: Mallin testified that when she got the news about the DNA match, in May 2008, a member of the D.A.'s office told her not to worry about the fact that Cole was dead. "I was feeling really guilty and crying on the phone," she said. "He said: 'Oh, Michelle, it's OK. He had asthma; he was going to die anyway.'"

Neither Lubbock police nor members of the county D.A. office participated in the proceedings in Baird's court. District Attorney Matt Powell told the Lubbock Avalanche-Journal that's because he doesn't think the proceeding was legal, because there is nothing legally explicit about posthumous exonerations. He said he'd be willing to lobby for a law that would define such a procedure but wouldn't come to Austin to participate.

Whatever the feelings of Lubbock Co. officials, Baird on Friday exonerated Cole and expunged his record. Cole's family is now looking forward. They told the Avalanche-Journal they hope Gov. Rick Perry will issue a formal pardon, and they plan to lobby for changes to eyewitness ID procedures. "I'm looking forward to the future," Session told the daily. "I don't know where this road will lead."