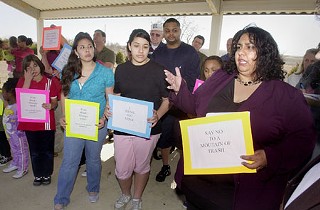 Josie Martinez (r), with daughters Alexia and Brianna Perry, speaks out against expanding the BFI landfill at a Wednesday press conference. She and other residents who live near the site believe the landfill is causing adverse health effects. (Photo by John Anderson)

It looked like the city of Austin would be powerless to stop the proposed expansion of the BFI landfill in Northeast Travis County. But council may have a new avenue of opposition – because of rainwater.

Local opponents to the expansion thought they had been abandoned by council on Oct. 31, when the city's legal department signed an agreement with BFI Waste Systems, ending the city's previous opposition to a permit application currently before the Texas Commission on Envi­ron­mental Quality. On Dec. 11, council voted to hire outside lawyers to examine whether the agreement could be torn up. (See "BFI Dustup," Dec. 26, 2008.) However, on Jan. 15 Mayor Will Wynn said the deal stays in place. He said, "While there were problems ... with the process, we believe that no action is the best action."

But during the TCEQ hearing ending Jan. 30, evidence was introduced that suggests the city may still have some say in the process. In 2002, BFI received a permit for minor modifications to the landfill, allowing the company to alter its height and drainage system but without changing the permitted amount of runoff on the west side. However, in its current expansion application, BFI's testimony is that the existing flow is three times what it told TCEQ it would be in 2002. Attorney Jim Blackburn, representing residents' group the Northeast Neighborhood Coali­tion, said: "These numbers should have been the same and were not. ... Anything else is illegal."

Blackburn called flow "an issue that the commission takes seriously" and said it could affect the current application. In addition, council is now investigating whether the extra runoff means BFI must apply for a new city development permit. To ensure compliance, Blackburn said, BFI's plan requires "either redesign or major property acquisition, or the expansion would not go through." Asked for a comment about the flow information, Will Flower, spokesman for BFI's parent company, Republic Services, said that Blackburn is "clutching at straws. We've done the calculations, and nothing has changed. The permit application is a viable application, the facility is environmentally sound, and this project should move forward."

For neighbor Evan Williams, the flow is not a legal, theoretical matter but a real concern. He keeps cattle on 23 acres just west of the landfill and has seen erosion and silting increase on his land since 2002. In 2007, during the last major downpour, runoff from the landfill mound knocked over a new stretch of five-strand barbed-wire fencing. "I look at it like they're taking my property," he said. "The modification was bad enough, but now they want to increase it, and I just wonder when they're going to finish kicking me."