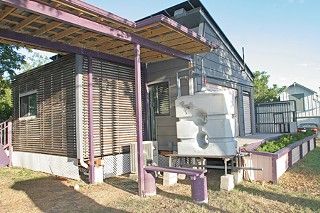 An assortment of solar-related bills filed recently could lead to more solar-powered homes, like this one in East Austin. (Photo by Jana Birchum)

An ambitious line of solar-related bills is aimed at giving Texas an advantage in generating energy from the sun and manufacturing solar components for use worldwide. Green groups Environment Texas, Public Citizen, and Vote Solar held events with legislators across the state Feb. 2, at which they released their report, "Wildcatting the Sun."

The report says bills such as House Bill 278 by Rep. Rafael Anchia, D-Dallas, and Senate Bill 427 by Sen. Florence Shapiro, R-Plano, could lead to solar installations on up to 500,000 rooftops in Texas by 2020 and create 22,000 jobs, at a cost of about 98 cents per month per Texan. Other sunny bills include SB 545 by Troy Fraser, R-Horseshoe Bay, which would create solar installation rebates for homeowners and businesses; Kirk Watson's SB 541, which would promote Texas manufacturing of solar panels and renewable energy equipment; and SB 598 by Leticia Van de Putte, D-San Anton­io, which would put solar energy in public schools. Van de Putte also filed SB 599, mandating energy efficiency and solar incentives, and SB 600, creating a sales-tax exemption for solar equipment.