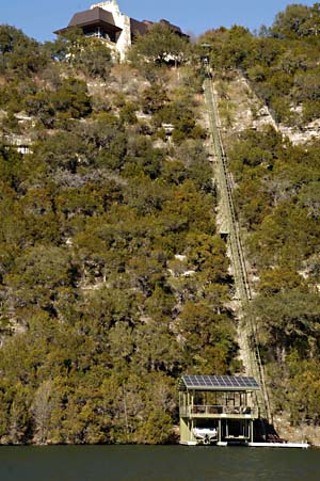 An increase in private trams such as this one on Lake Austin has sparked concerns about shoreline erosion and a lack of city oversight. (Photo by Jacob Cottingham)

As mayoral and City Council candidates jockey for the votes of Austin's neighborhood coalitions and environmental groups, a new grassroots group has emerged that's trying to draw attention to the health of Lake Austin, the section of the Colorado River that runs through Austin's tonier residential areas west of MoPac. The new group, the Lake Austin Collective, hopes to promote an agenda centered on addressing lakeshore erosion, unpermitted tram construction, and water quality. Alan Roddy, founder of the collect­ive, has been busy gathering names and building membership through existing organizations such as Friends of Lake Austin and 2222CONA (Coalition of Neighborhood Associations).

Homes perched on the cliffs of Lake Austin often lack direct access to the lake, so some homeowners have crafted other methods of reaching the water. From the vantage point of the Lake Hills Community Park, it's easy to see three homes across the lake with do-it-yourself routes to the water. One homeowner has built an approximately 100-foot-tall wooden staircase bending and twisting its way down the steep rocky cliffs to a small boat dock. Another has constructed an elaborate, 300-foot electric tram not unlike the sort of funicular one may find in steep mountain towns or heading up to Montmartre in Paris. Farther west along the cliffs is another tram, this one appearing a bit older and slightly more rickety – from across the lake, it looks to be assembled from spare Ferris wheel parts and to bend with carnival pride under its own weight. Trams can make an arduous climb down rotting wooden stairs a thing of the past, and according to many who live along the lake, they're a growing trend among those wealthy enough to build them. A quick review of listings in a recent real estate mailer from Moreland Properties shows a "tram to the water" and an "option to participate in small [homeowners association] forming with neighbors for use of tram to Lake Austin and future boat dock." However many trams already exist (and that number is subject to debate), more seem certain to appear.

Roddy, a Cuernavaca neighborhood resident of 45 years, says his new collective will try to get the city to pass a moratorium on such trams, which he fears will be cropping up every 500 to 1,000 feet. Pointing to the trams across the lake and the hoses and pipes snaking up along the cliffs, Roddy says, "No one wants to buy a home when it's like living across the Houston Ship Channel." Using Google Earth and a detective's vigilance, Roddy has spotted what he says are several violations of "cut and fill" development standards and illegal dumping that has also been occurring along the lakeshore. Given that Lake Austin is a major source of the city's water supply, he said he's also exploring the notion of trying to gain legal protections for the cliffs, similar to those protections given recharge features and endangered species habitats.

In addition to the trams' unsightliness, the increased boat traffic is having an impact on the lake's shoreline. Most residents have taken to building concrete walls to defend against what Roddy describes as a foot of shoreline depletion each year.

In 1980, the city enacted the Lake Austin Watershed Ordinance, which was folded into the 1986 Comprehensive Watersheds Ordinance. But over the years, it seems that codes regulating the lake have been diluted and farmed out to various boards or agencies. The city has been deferring to the Parks & Recreation Department's Navi­ga­tion Committee on variances for boat docks, while the Lower Colorado River Author­ity manages the actual water in the lake. Roddy blames a "scattered bureaucracy" for impeding any cohesive plan for the lake. While the Lake Austin Watershed Ordinance of 1980 specifically mentions that the "abrupt topography, thin and easily disturbed soil, natural springs, unique biotic communities and spare but significant vegetation, is different from other watersheds within Aus­tin's jurisdiction," Lake Austin is not mentioned in the current Watershed Master Plan.

Linda Guerrero, who chairs the Parks and Recreation Board, points to "an area of confusion" surrounding the trams. Attorney Bruce Aupperle has been representing the Tarrytown Boat Club's years-long effort to expand its dock and is well-versed in legal minutiae surrounding lake permits, trams, and docks. Aupperle said it is his belief, based on city memos from staff at Austin's Watershed Protection Department, that trams are legal.

Still, Guerrero said the Parks Board is in the process of crafting a resolution requesting a review of the trams. "We're concerned because you don't even need to have a permit to build trams. There seems to be a lot of confusion around this." She said inspections and safety issues are also of particular concern.

For his part, Roddy is ready for a showdown. "No one person, no group of people are more important than Lake Austin. Period," he said, referring to the homeowners who are building trams. "And I don't care how much money they have, what political connections [they have], [or] how big their egos are, Lake Austin has to come first."