On the Lege: Senate Fight

What's Two-Thirds of Less Than Zero? 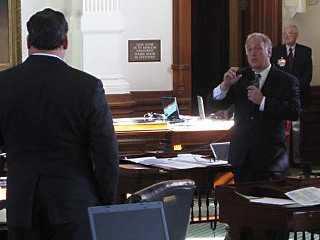 "At the beginning of my 23rd year in the Texas Senate, I never thought I would hear myself say these words: We should learn from our colleagues in the House of Repre­sent­atives," Laredo Democrat Judith Zaffi­rini wearily admitted on the Senate floor last week. "Changing the rules is simply not the wise thing to do. ... This sets a bitter and partisan tone for what we hoped optimistically would be a great session."

By now, if you're dutifully keeping up with the Chronicle's new LegeLand Web page (austinchronicle.com/
legeland) or that of some lesser publication, you've heard about the acrimony that kicked off the 81st session of the Texas Senate last week. Even so, Texans might still be unclear on what the fuss was all about and why they should care. Austin Sen. Kirk Watson acknowledged as much in his floor speech: "This whole big fight is over really a procedure, a technical maneuver, a technical matter. In other words, it's a really complicated thing that I think most folks would find rather boring." Perhaps, but it could have grave consequences for the ability of thousands of Texans to vote.

The fuss comprised two fights, battled simultaneously on Jan. 14. Immediately at hand was an attempt to set aside the Senate's "two-thirds rule," which determines the flow of legislation to the floor. Once that tactical move succeeded, it then set the stage for the second (policy) issue, voter-identification requirements.

The two-thirds rule is unique to the Texas Senate: Traditionally, by means of a noncontroversial "blocker bill" placed at the top of the agenda, no bill may set aside the blocker bill and thus come to the floor for debate unless 21 of the 31 senators allow it (at which point the majority rules). The rule, in theory, promotes bipartisan consensus – the most contentious issues get worked out beforehand in committee (or backstage), the bloody floor battles typical of the House are thereby avoided, and the majority does not trample the minority.

The rule has long served the Senate well as a nonpartisan safety valve, but last session the Democrats used it to stymie the Republican majority from passing a national GOP pet project: a voter-ID bill, which would require voters to present photo ID before being allowed to cast a ballot. That may sound sensible enough, but Democrats argue it has dangerous consequences: Women, the elderly, minorities, and the poor are less likely to possess photo IDs. Dems say the fact that those groups are more likely to vote Democratic is no coincidence – rather than preventing voter impersonation (a virtually nonexistent crime), the real aim is to help suppress Democratic turnout. The Dems had the 11 votes necessary to block it two years ago, and now they have 12.

So this time, Republicans decided to jump the gun: Tommy Williams, R-The Wood­lands, introduced a resolution to suspend two-thirds specifically for voter-ID bills. Because the rules of the Senate for this session (including the two-thirds rule) had not yet been adopted, only a simple majority was needed to pass Williams' resolution.

Thus began a bitter, all-day battle, one Republicans knew they would eventually win and which thereby reduced Democrats to making symbolic arguments.

Williams said he'd researched the Legislature's history and "was surprised to find, after all I'd heard about our sacred tradition of the two-thirds rule, that there are literally hundreds of instances where this body has chosen to either ignore or go around the two-thirds rule to bring legislation to the floor." Williams pointed particularly to a mechanism used on redistricting issues in 1981. "That struck me as an issue very similar to the one we have with voter ID. ... We continue to have a partisan divide on this issue. It seems intractable. ... I don't believe that middle ground is there."

Democrats countered: Why did this issue have to be the first order of business? Williams claimed it was because "the integrity of the ballot box is fundamental to who we are," but Democrats pointed out that voter impersonation is so rare that it's "a solution in search of a problem." They pointed at an earlier version of the resolution as proof of the GOP's partisan motives: Originally, redistricting bills – another strongly partisan issue – were to be exempt as well. "That's another example of what is most important to you and perhaps your caucus," said John Whitmire, D-Houston. "You change our way of doing business around here to address those political, partisan issues." Williams said he removed redistricting from the resolution "out of deference to you."

To pursue their argument about priorities, the Democrats then tried amending the resolution on the floor: Six amendments were laid out, each requiring that, if voter ID was to be exempted from two-thirds, bills addressing more crucial issues be addressed first: foreclosures, veterans benefits, unemployment, insurance, education. If a special class of exempt bills is to be created, Watson asked as he laid out an amendment favoring children's health insurance, why not do the same for other issues? "I believe Texans would place a higher priority on the issues that have been raised in the previous ... amendments and this ... amendment above voter ID," Watson argued. All six were tabled 19-12, along party lines.

The Democrats tried other tactics. Early on, Houston's Mario Gallegos Jr. suggested that if in fact no rules had been established yet, "We could just walk." Later, Eliot Shapleigh of El Paso questioned whether any of Lt. Gov. David Dewhurst's rulings during those first two days of the session were even valid if the body's rules had not yet been set – i.e., who was the presiding officer? – a point of order that sent the Senate into a lengthy recess before being overruled.

The resolution finally passed, 18-13, with Dallas Republican John Carona bravely jumping ship – a defection, he said he was told, that might cost his own bills or even bring him a primary opponent. Although Carona said he would eventually vote in favor of voter ID, "I can't, with a straight face – and I dare say most of you, with a straight face – cannot admit to this being the most important issue of the day."