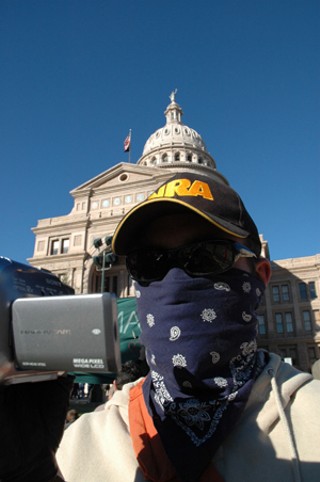 Before he became an FBI informant, Brandon Darby pretended to be one — as a joke — at a Nazi rally at the state Capitol in 2006. He still thinks the joke is funny. (Courtesy of Ann Harkness)

Brandon Darby is no stranger to media attention, but he's new to the kind he's been getting since a St. Paul Pioneer Press article identified him in October as the informant who had "infiltrated" Bradley Crowder and David McKay's "protest group." A few days later, Darby's friend and fellow Austin activist Scott Crow passionately defended Darby on indie media site www.ntimc.org, calling the report an "absolute COINTELPRO lie." Crow was ultimately proven wrong by Darby himself, who proudly admitted his informant's role in a December open letter. A sector of Austin's betrayed activist community responded in kind with its own public statement. We've posted a range of this material – including the FBI affidavit (referring to Darby as "CHS 1") that opened the floodgates below:

3) "On Rumors, Governments and Mouthpieces: Brandon Darby, Grand Juries and Our Movements," by Scott Crow, Nov. 2, 2008.

5) "Statement on Brandon Darby, the 'Unnamed' Informant/Provocateur in the 'Texas 2,'" by the Austin Informant Working Group, Dec. 31, 2008.