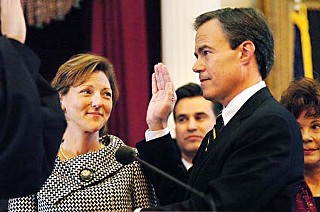 With his wife, Julie Brink Straus, by his side, two-term state Rep. Joe Straus, R-San Antonio, was sworn in Tuesday by Chief Justice Wallace Jefferson as the new speaker of the Texas House. In his opening remarks to members, Straus, who won by acclamation, promised to "create an atmosphere where everyone's voice can and will be heard." (See "A New Day" for more photos.) – Richard Whittaker (Photo by John Anderson)

• Water-Pumping Power Trip Hays County commissioners this week were again faced with the inadequacies of their county powers as 25 or so people appeared at Tuesday's meeting to voice opposition to yet another development they say would negatively impact the region's water quality and supply. Commissioners said they were legally bound to approve a measure that essentially replatted 146 lots on 93 acres of the Ridge at Wimberley Springs. A letter from water supplier Aqua Texas stated it had enough capacity left in its water-pumping permit to supply the additional units. Jack Hollon of the Hays Trinity Ground­water Conservation District board took issue with that claim, saying the national water giant was "right up against" its permitted limit. And others provided documents stating Aqua Texas was only delivering 52% of the water it was pumping, wasting 80 million gallons of water during a severe drought. Angry commissioners verbally chastised the company but were ultimately left without any regulatory authority as the company is regulated by the Hays conservation district and the state. Commissioners are revising subdivision rules that would increase minimum lot size and are lobbying the Lege for expanded county authority. – Jacob Cottingham

• Travis Co. seeks housing grant On Tuesday, Travis Co. Commissioners Court approved joining a federal initiative to combat middle-class blight. Commissioners authorized the Travis County Housing Finance Corp. to fast-track a plan, already in the works, to apply for a $750,000 grant from the federal Neighborhood Stabilization Program, as part of a $3.9 billion allocation authorized under the Housing and Economic Recovery Act of 2008. NSP funds, to be awarded in April, would provide "emergency assistance to acquire and redevelop foreclosed properties that might otherwise become sources of blight," according to the corporation. Specifically, the county would be able to buy, rehabilitate, demolish, redevelop, or broker vacant residential property, but funds may not be used to prevent foreclosure. Though the vote was unanimous, Commis­sion­er Ron Davis questioned whether the income "ceiling" of targeted families was too high – at least 25% of the funds must go to residents at 50% below the Austin median income, and the rest must go to those at or below 120% of the AMI. "Some are not too cool with the way we are addressing the needs of the poor," Davis said. The city of Austin is estimated to receive about $1.25 million of the total allocation. – Patricia J. Ruland

• PAC-ing It In? A new political action committee has formed to vet candidates for the May council races. Change Austin PAC promotes itself as a "cross-partisan" spin-off of the anti-Domain-subsidies Proposition 2 campaign and says it will work for "full representation for the majority of Austin voters and local businesses who have been over-taxed and under-served by a local government too much under the influence of special interests." More info at ChangeAustin.org. – Michael King

• so Help Me Abbott Rest easy. Texas Attorney General Greg Abbott is leading a crusade to protect prayer – and, specifically, to protect President-elect Barack Obama's right to say "so help me God" during his swearing-in on Jan. 20. Abbott penned an amicus brief on behalf of the attorneys general of all 50 states in an attempt to defeat a legal challenge to the "prayer" brought by lawyer, doctor, and atheist activist Michael Newdow, who started the First Amendment Church of True Science in 1997. Newdow has sued to have "under God" taken out of the Pledge of Allegiance when recited in public schools and advocates removing the phrase "In God We Trust" from U.S. currency. But, wrote Texas Solicitor General James Ho on behalf of Abbott and his fellow attorneys general, prayers and "oaths invoking God have been a staple of official inaugural events throughout history, across the country, and at every level of our government." And Newdow has cited no "legal authority" that would allow the D.C. federal district court to tamper with such tradition. "From daily prayers during legislative sessions to monuments on public property displaying the Ten Command­ments," Ho said, "the Supreme Court has repeatedly upheld the constitutionality of official acknowledgments of faith." – Jordan Smith

• City employees cut own costs City Manager Marc Ott plans to launch on Friday a new Dollar$ and Sense initiative, a program offering city employees a voice in recommending ideas for potential cost savings, through Feb. 13. Ott's chief of staff, Anthony Snipes, said the city manager regards the project as a priority in order to avoid major reductions in city services or job losses – even as the city must significantly cut its 2009-2010 budget, due to decreased sales-tax revenues. The Dollar$ and Sense program invites all employees to bring ideas to the table for relatively painless ways to cut the city's overhead. The savings realized could directly help to protect their jobs and those of their co-workers. A review panel led by Assistant City Manager Michael McDonald will distill suggestions (submitted through an internal website and on paper) that can be put into action, and the employees forwarding ideas will be recognized and thanked by the city. – Katherine Gregor

Ana Sisnett Will Be Missed 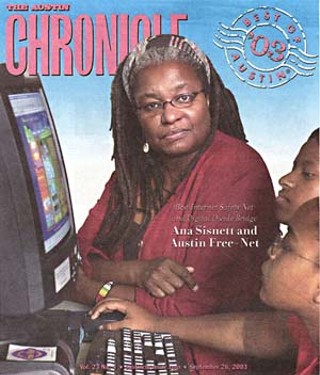 Ana Sisnett, beloved Austin author, artist, activist, "Best of Austin" cover gal, and former executive director of the digital-divide bridging Austin Free-Net, passed away peacefully Tuesday at her home in East Austin after a protracted battle with ovarian cancer. Known for her love of mangoes, big heart, and local work with Free-Net, as well as with Katrina relief at the Convention Center in 2005 and ALLGO, the statewide group for queer people of color, Sisnett's passions touched many people's lives. Her gentle way of wielding that fierce heart of hers shall be sorely missed by the many communities that her dedication affected. Friends and family are planning memorial services; see austinchronicle.com/chronic for updates. – Kate X Messer Emerald City Press, the stylish little coffee shop that opened last year near the corner of Ninth and Lamar, has finally won its prolonged struggle with the city for permission to add a guest seating area overlooking Shoal Creek. Since last July, the coffeehouse has sought a variance to excuse it from city parking requirements, which in its case called for 33 spots when it only had seven. Prior to opening, Emerald City was advised by the city to set up shop as a walk-up/drive-through business and later seek the variance and off-site parking required for the outdoor seating – but things got complicated when area parking availability proved scarce and some nearby landowners opposed the variance (see "Emerald City Blues," Oct. 10, 2008). Emerald City owner Emily Fleming-Nash said she agreed to a number of conditions to win over her opponents. She shrank her seating area to 480 square feet (half what she originally sought) and agreed to no indoor seating, no on-site beer or wine consumption, no commercial kitchen, and no business hours past 9pm. – Daniel Mottola On Saturday, the ongoing but increasingly hang-dog local protest against Petland Inc. received some encouragement. The faithful few, gathering as usual at the 9900 S. I-35 Petland store, were joined by dozens more upon news that the Humane Society of the United States had, after an eight-month investigation, validated activists' worst fears. "[B]ehind the friendly facade of the local pet shop ... there often lies a puppy mill" that houses dogs in "shockingly poor conditions," reads the Humane Society website, fingering Petland specifically. Amid honked catcalls from the freeway, energized Austin protesters distributed handouts explaining that "many [pets] will die before they make the long journey to your local pet store." Austin organizer Sharon Yancey urged that people "adopt, don't shop." Inside, Petland manager Daxa Bhakta distributed company literature, too, countering that Petland "internally" compiles an "evolving 'do-not-buy' list of breeders." Regardless, the chain is presumably a profit mill, with its least expensive dog going for $288 and an English bulldog delivered by C-section (its most expensive "designer dog," as Bhakta referred to purebreds) selling for $4,000. See more at www.stoppuppymills.org/inside_a_puppy_mill.html and www.petland.com/truth. – Patricia J. Ruland

The city and ROMA Austin have set up an online community survey seeking input on how different areas of Downtown should be planned in order to retain and evolve their own distinct characters. The 11 areas addressed include the Waterfront, Waller Creek, Wooldridge Square, Northwest, and Capitol Complex districts. The survey is part of the public input process for the Downtown Austin Plan; a major recommendation in ROMA's Phase One report was the definition of districts, each with its own goals and priorities, desired land uses, density bonus provisions, and design standards. Take the survey once for each district to express preferences and specific ideas for walkability, parks improvements, maintaining character, community facilities, and so on. The survey is at www.cityofaustin.org/downtown through Jan. 22. – Katherine Gregor