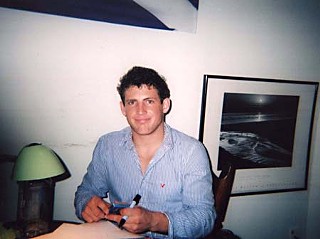 Bradley Crowder, a 23-year-old Texan who has been held without bail in Minnesota since his arrest for disorderly conduct in St. Paul on Sept. 1, pleaded guilty last Thursday to one count of aiding and abetting possession of an unregistered firearm, as part of a plea bargain that could bring his sentence down from 10 years to 30 months in federal prison.

Crowder, along with his friend David McKay, 22, was arrested on charges that he was the leader of a group of activists who drove up from Austin with plans to disrupt the Republican National Convention. After a series of events that included the St. Paul Police, without a warrant, seizing homemade riot gear from a trailer belonging to the group, Crowder was accused of an alleged plot to throw Molotov cocktails at empty police cars parked in a parking lot.

Through a series of yes or no answers, Crowder admitted that he was involved in the plot to make Molotov cocktails (which the federal government classifies as unregistered firearms), but his friends and family do not believe he came to that decision on his own. Local activists believe that a since-revealed government informant, Brandon Dar­by, was more than instrumental in Crow­der's actions and arrest.

"I think that he made some bad choices, but I think that he was manipulated to do so," says Bradley's mother, Twila Crowder of Midland, Texas. Crowder says she's proud of her son, whom she credits as always rooting for the underdog and always willing to take a stand for his beliefs. "Bradley was born with foot problems, and so he had to wear corrective shoes as a child," Crowder recalls. "When he got a little older, the doctor said that we could let him wear really good tennis shoes, so we always had him in Nikes. When he was in fourth grade, all that stuff came out about Nike using child labor in sweatshops and, well, he refused to wear Nikes ever since."

A registered Republican, Twila Crowder says she's had long conversations with her son about his political beliefs, which she says have matured dramatically over the years. "It used to be anarchy this and anarchy that," she recalls. "Now he just wants to make sure that the big guys don't take advantage of the little guys. He believes that everybody should have enough food, a place to live, and an equal chance for education." Crowder says her son has spent his time in jail tutoring fellow inmates in preparation for their GEDs. "He took some tests to take classes, but he tested out of everything. He's a really intelligent guy. Now he wants me to send him some Spanish books so he can work on his Spanish, because a lot of the people he's tutoring are Spanish speakers."

Austinite Paul Minjares, 24, knows both McKay and Crowder from back in Midland. "They're both just really good people," he says. "No one that I know would have anything bad to say about Brad. I lived with him in Midland; we've worked together; I've gotten him jobs. We're everyday kind of friends, and it's been really weird not having him around." Minjares says that there's nothing in his five-year history with Crowder that would lead him to believe he would ever intentionally harm anyone. "Our group never fights. We're all laid back."

"He's just not the kind of kid who would ever hurt anybody on purpose," his mother agrees. "He used to get bullied as a kid, and when I would tell him that he had to hit back, he'd refuse."

Cari Kujawa, 24, met Crowder through David McKay, whom she has known since he was a high school freshman (and whose case is still pending). She says that though Crowder was outspoken about his political beliefs, he was open to hearing other people's opinions. "We'd always joke around because I really like Bush. I just always thought Bush was really funny, and you can just tell that he's a real sweet guy. It made Brad crazy, because he thinks Bush did a lot of bad things, but we'd laugh about it." The only thing that Kujawa remembers about McKay and Crowder's preparations for heading up to Minnesota is how they talked about building their shields. "I don't know what I pictured; like Medieval Times [theme restaurant] or something."

"It was Brandon Darby who gave them the idea for those shields, and he helped them build them," says Lauren Pool, 22, who has known both McKay and Crowder since they were all high school seniors back in Midland. Pool believes that Darby, the 32-year-old Austin activist turned FBI informant, used his influence as a mentor to set up McKay and Crowder. "I mean, he was training them in martial arts," Pool insists. "These guys are both inexperienced political activists who, in all the years I've known them, never even talked about building Molotov cocktails. Why would they start now?"

"Those allegations are untrue," Darby says. And though he will not talk about any specifics of the case, he's confident that, in a couple of weeks' time, when McKay goes to trial, people will be able to see the whole picture more clearly. "'Provocateur,' 'political prisoner,' 'innocent' – no one has any facts to say any of that," Darby insists. "There's not a night that I go to bed that I don't think about those two people. But Crowder is taking responsibility for his own mistakes. All I can say is that I have behaved honorably, and people will feel so when this is over."