Tweet
print
write a letter
• A Piece of Austin's African-American History Civic leader Fred McGhee won the first round against the city in his fight to preserve the auditorium and gymnasium of the former Texas Blind, Deaf, and Orphan School, formerly a charity-sponsored school for black children prior to its desegregation in 1965. Last week, City Council moved, on first reading, to recommend historic zoning and adaptive reuse of the 44-acre Levander Loop site, overruling the city staff's recommendation. The city, which now owns the site, has been using it for the Austin/Travis County Health and Human Services Department. City staff had its own arguments against the zoning – it only served as the campus for a handful of years, the cost of restoration was cost-prohibitive, and a portion of the site was being put aside for the city's new animal shelter – but council was swayed by McGhee's arguments that federal money is available to preserve the site and that this campus is the only remnant of an important page in Austin's African-American history. – Kimberly Reeves

• Anti-Craddick Reps Learn Their ABCs With the next legislative session starting on Jan. 13, the race to replace Speaker Tom Craddick has gained momentum. First, on Dec. 22, 11 anti-Craddick Republicans – including all six that had at that point filed to challenge the incumbent in the 81st session – held a meeting/teleconference in Austin to select a candidate from among their ranks, and the selected name is being kept under wraps until Jan. 2, as is a promised list of more Republican supporters. Then on Dec. 28, Rep. Dan Gattis, R-Georgetown, became the seventh anti-Craddick Republican challenger and 13th House member to file to run for speaker. Finally, on Dec. 29, Democratic House Caucus Chair Jim Dunnam released his list of 64 ABCDs – Anybody but Craddick Democrats, the members who have signed a pledge to "not vote for Tom Craddick for speaker for the 81st Legislature under any circumstances" (10 Dems, including Rep. Dawnna Dukes, Austin, still remain uncommitted). Combined with the 12 announced Republican rebels, this means 76 anti-Craddick votes. Now the question is whether this unknown Republican alternative can keep those supporters unified and win the Democrats over as a single voting block. – Richard Whittaker

• A Wee Fine for Dukes The Texas Ethics Commission has found that Austin Democratic Rep. Dawnna Dukes' election campaign violated state finance rules and has fined Dukes' family member and campaign treasurer Ateja Dukes $2,800. On Dec. 4, the commission found that in the four campaign reports filed since Jan. 29, 2008, Dukes failed to explain adequately where $7,007 in campaign funds went – the reports simply said they went toward credit-card debt, without listing who the original vendors were. The commission's resolution says it is "unclear whether the interest payments were related solely to campaign activity or if portions were related to personal use of the credit card." Dukes still has not corrected the reports, said the commission, even though she promised to do so last February. The size of the fine, which seems small, has raised some eyebrows. For context, in 2005 the commission fined former Austin Rep. Ann Kitchen $10,000 for accidentally filing a corrected report late (see "Oh, Now They Care About Ethics," Jan. 21, 2005). – R.W. 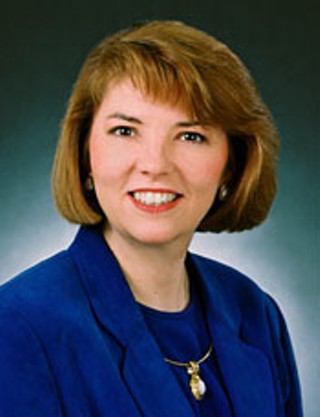 • Texas republican Onward and Upward Republican Party of Texas Chairman Tina Benkiser has joined forces with fellow conservative and former Ohio Secretary of State Ken Blackwell to run as a joint ticket to lead the Republican National Committee. Blackwell plans to challenge Chairman Robert M. "Mike" Duncan of Kentucky, while Benkiser is after Blackwell's fellow Buckeye, co-Chair Jo Ann Davidson. Calling herself "battle-tested" (arguably by the state GOP's regular election losses since she took charge in 2003), Benkiser said she plans to "build infrastructure in all 50 states plus territories and possessions so that those who share our philosophy can be effectively engaged in the political process." Two other current state GOP chairs – Saul Anuzis of Michigan and Katon Dawson of South Carolina – have also declared their intentions to take on Duncan, as have former Tennessee GOP chair (and Mike Huckabee's presidential campaign manager) Chip Saltsman and former Maryland lieutenant governor (and GOPAC chair) Michael Steele. – R.W.

• Forgione Conclusion Final proof that longtime Austin Independent School District Superintendent Pat Forgione is really leaving: An endowment fund has been named after him. On Dec. 19, the Austin Community Foundation and the advisory board of the Ann Richards School for Young Women Leaders launched the Dr. Pascal D. Forgione Jr. College Advisor Fund, to be spent on college preparedness programs for students at the all-female Ann Richards School. Praising Forgione, who retires on June 30, Ann Richard's School advisory board Chair Ellen Richards said, "Educational opportunities are richer and more diverse because of his leadership." Contributions to the fund can be sent to the Ann Richards School for Young Women Leaders, PO Box 684746, Austin, TX 78768. – R.W.

• Budget-Friendly Fuel Charge As the cost of living gets steadily more unaffordable, there's some good news for Austin Energy customers. The electric utility has announced that the fuel charge – the part of the bill that pays for the coal, gas, or other source of energy – will not rise in 2009. Austin Energy bills break in two sections: 1) the fuel charge, currently 3.55 cents per kilowatt hour, and 2) the energy charge (which pays for infrastructure and operations), which stands at 6.02 cents/kwh. The energy charge had not risen since 1994, but last year, because of soaring gas prices and several one-off generation costs, the fuel cost rose from 3.04 cents/kwh; however, because natural-gas futures almost halved over the last year, the utility is able to lock in better prices. – R.W.

• Griffin's last days As former Williamson County Constable Gary Griffin neared his final day on the job (Dec. 31), county officials threw mud one last time, implying he'd mysteriously skipped midmonth. Griffin was defeated in the March GOP primary by Lotto winner and reserve Deputy Constable Robert Chody – the political protege of WilCo brass, angry after Griffin sued the court for slashing his budget midyear in 2005. Though bloggers celebrated the demise of Griffin's police career, he began training in December to be a senior sergeant in Travis County Precinct 3. Possibly getting wind that Griffin's prospects had brightened, officials aired nebulous "concerns" in the Dec. 19 Round Rock Leader. "Speculation ... swirled in county government circles" that officials "were not sure if Griffin and his deputy constables had or had not abandoned their jobs," the paper reported. Griffin explained that three of four of his deputies were on sick or family leave – not a strain for other precincts employing enough deputies, as his once had – but that the work was getting done nonetheless. Indeed, there was no real crisis, as Justice of the Peace Dain Johnson admitted. "WilCo tried to sabotage my future in Travis County, but they didn't succeed," Griffin told the Chronicle. – Patricia J. Ruland