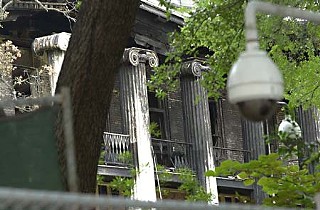 1) The Fire This Time It was a bad year for the Texas Department of Public Safety. On June 8, the night the Governor's Mansion burned, the sole officer on duty and his semifunctional video-surveillance cameras didn't see, and thus didn't stop, the cargo-pants arsonist who did the damage. After much recrimination, longtime agency leader Col. Tommy Davis stepped down. Finally, a Deloitte Consulting review concluded that DPS' clumsy bureaucracy is in serious need of a top-to-bottom makeover.

2) The Light Goes on at TYC The 2007 revelations of widespread sexual and physical abuse throughout the Texas Youth Commis­sion's facilities triggered sweeping reforms, the closure of several facilities, and the hiring of an independent ombudsman. In October, Gov. Rick Perry decided matters had improved sufficiently to end the conservatorship and bank on new Executive Commissioner Cheryln Townsend. What's next? Sen. Chuy Hinojosa wants more time to let the reforms work; Sen. John Whitmire says start over with a new, integrated juvenile parole and prison system.

3) APD Wants to Suck Your Blood Midyear, new police Chief Art Acevedo announced that the Austin Police Department would no longer take no for an answer on DWIs. He instituted a "no refusal" policy, securing instant search warrants to give police (a paid phlebotomist at the Travis County Jail) the authority to draw blood to confirm intoxication. The policy debuted on Halloween weekend over public protest – just something about the government getting inside a person's skin. But the courts have found it legal, meaning that there's just one way to avoid the invasion: Don't drive drunk.

4) Judge Hervey Chooses Integrity The reputation of Texas' criminal justice system is in the shitter, thanks in part to Court of Crim­inal Appeals Presiding Judge Sharon Keller, who arbitrarily closed the court late last year, foreclosing a death row inmate's appeal and ensuring his death. CCA Judge Barbara Her­vey stepped forward, organizing the Criminal Justice Integrity Unit, made up of law enforcement, lawyers, and lawmakers who have agreed that we must improve the system. Whether the unit's good intentions will have real political stroke remains to be seen.

5) About Those Convictions At press time, the total number of exonerees from Texas was 38, making the state far and away the leader in wrongful convictions. Thanks to the leadership of the Innocence Project of Texas and Dal­las Co. District Attorney Craig Watkins, years of injustice are beginning to be undone. How high the number will climb depends in part on whether the Lege moves to make sure that cases without DNA evidence find meaningful ways to vet innocence claims in courts.

6) Suspicion of Murder In September, former Georgetown Police Sgt. Jimmy Fennell Jr. pled guilty to charges of kidnapping and improper sexual conduct with a person in custody – a woman who had called police to her home – and got 10 years. Fennell is best known as the man engaged to Stacey Stites of Bastrop, murdered in 1996. Rodney Reed was convicted and sentenced to die for Stites' death, but his supporters and family have long said Fennell, her fiancé, was a far more compelling suspect and now point to his conviction as additional circumstantial evidence.

7) Female Fire Chief On Nov. 20, City Coun­cil confirmed Rhoda Mae Kerr as Austin's first female fire chief. Kerr comes from a firefighting family and served for 20 years in Fort Lauderdale, Fla., before taking over as Little Rock, Ark., chief in 2004. Her plate will be full come Feb. 2 – prominently, a charge from the council to diversify the overwhelmingly white Austin Fire Department. The monochromatic department took another hit this fall when the department's only African-American female firefighter, Nona Allen, filed suit against unequal city facilities for female firefighters.

8) Krusee Cleared Retiring State Rep. Mike Krusee, R-Round Rock, avoided too many drunken lawmaking jokes when in November Williamson County Attorney Jana Duty dropped drunken-driving charges against him. Krusee was pulled over in April and failed a field sobriety test, but Duty concluded that there was insufficient evidence of intoxication for a jury. Attorney General Greg Abbott initially allowed the Department of Public Safety to withhold a dash-cam video of Krusee's arrest; released after his dismissal, the video appeared inconclusive – lucky for Krusee that the WilCo fuzz doesn't employ a 24/7 "no refusal" policy.

10) Contractual Differences In another stunning vote, firefighters rejected a new employment contract that would have given raises and committed the city to funding retirees' pensions. Members balked at a provision allowing incoming Chief Kerr broad­er authority to recruit minority firefighters, saying the clause would weaken hiring standards and increase risk. Civil service law will fill the void, and city officials declined to return to the bargaining table. Meanwhile, Austin/Travis Co. EMS workers approved their first-ever employment contract with the city (a result of their securing meet-and-confer bargaining rights during the 2007 legis­lat­ive session), which took effect Oct. 1.