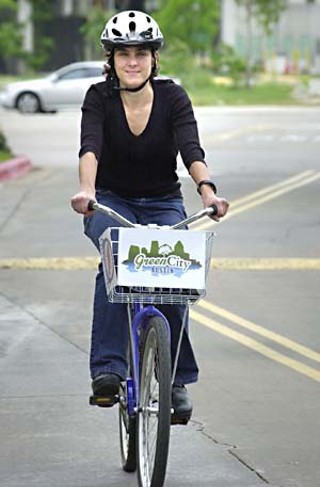 1) Biomass: Got Wood? In August, Austin Energy sought to push through council a 20-year, $2.3 billion deal for a waste-wood-burning power plant. The Nacogdoches-area plant would provide about 75,000 homes with constant "carbon-neutral" energy. Critics filled City Hall to question the lack of public input and whether AE's justifications – mainly fast-rising natural-gas prices – were well-founded. Biomass passed, so expect wood-fired electricity by 2012.

2) HelioVolt: The Next Generation Austin native B.J. Stanbery, founder and CEO of thin-film solar manufacturer HelioVolt, said he fought hard with board members and investors to site the company's first plant in his hometown – it opened in October on East Stassney Lane. Made mainly from metals instead of scarce refined silicon, HelioVolt's solar cells, which can be made faster and cheaper than today's panels and be integrated into buildings, may nudge solar into the mainstream.

3) Talking Trash In April, the city debuted its plan to send zero waste (or darn close) to landfills by 2040. The plan called for expanded recycling, more composting, incentives for reducing disposal, and more reuse. A proposed resource-recovery park or green district would be part landfill, part recycling and reclamation center, and part composting plant – but the proposed location is on city-owned land near Webberville, which raised a stink from residents and leaders there.

4) Down in the Dumps Avid recyclers savored that new recycling-bin smell from the gigantic new single-stream bins delivered to most Austin driveways but held their noses when they learned recyclables are being trucked to Dallas. Solid Waste Services held off building a sorting facility (after spending $1 million designing one). Waste watchdogs freaked when city staff signed an agreement in Novem­ber supporting an expansion to BFI Waste Sys­tems' Northeast Austin landfill, contrary to a 2007 City Council resolution – the investigation, and the dust, is still in the air.

5) Pedal-Powered Progress The city pumped up pedal efforts by updating its 10-year-old Bicycle Plan and finalizing the recommendations of the Street Smarts Task Force. In June, volunteers with Austin's Yellow Bike Project, purveyors of free bike-maintenance education and rehabbers of old bikes, moved the contents of their 30,000-square-foot warehouse headquarters off East 51st Street to their new home at the corner of East 12th and Webberville – entirely and awe-inspiringly by bike.

6) More Power to Us In February, the city officially said "no thanks" to an offer to partner in the construction of two new nuclear reactors at the South Texas Project, the nuke that provides about 29% of Austin's electricity. In late August, Austin Energy began to lay out its plan to meet the city's future energy needs, envisioning: a major solar farm in Webberville, aggressive energy-conservation tactics, enhanced city codes for zero-energy buildings. Look also for expansions to the city's Sand Hill Energy Center natural-gas plant, 600 megawatts of new wind power, a possible large-scale West Texas solar farm, and installations on "solar-applicable" places such as over parking lots.

7) In Hot Water Water shortages took a turn for the worse over the last year as local farmers watched crops – and livelihoods – go dry. Wimberley's Jacobs' Well, spring-fed by the Trinity Aquifer, went dry for the second time in recorded history, although it had continued to flow even in the Fifties' worst drought on record; the first time it petered out was only eight years ago. In December, the Barton Springs/Edwards Aquifer Conser­va­tion District declared a critical-stage drought, with weather conditions expected to remain dry for the coming month.

8) Biodiesel Bust The Texas biodiesel industry was feeling burned in 2008 thanks to the Texas Commission on Environmental Quality's Texas Low Emission Diesel Program, introduced in 2005 and implemented Jan. 1. Designed to cut smog-forming nitrogen-oxide emissions from diesel fuels, the rule snared biodiesel, too, which, according to conflicting tests, can have 2% higher or lower NOx emissions than petroleum diesel. The rule had the practical effect of helping diminish the number of public biodiesel pumps in Austin: In 2006, the city had more than 30 – today we have just one.

10) Nothing to Do With Pecans The Pecan Street Project clean-energy initiative promises to save the planet and Austin's economy at a stroke. The city provides the Austin Energy power grid and brain trust, which researchers and entrepreneurs will use to develop, test, and implement a new urban power system. With key national corporations and nonprofit Environmental Defense Fund as partners, the project aims to solve a key challenge: how to reliably, sustainably, and profitably provide "green" energy on a mass municipal scale.