Tweet
print
write a letter
1) As the Dais Turns The year's most dramatic shift was the May council election, led by the symbolism of neighborhood champion Laura Morrison taking the Place 4 seat of stat-quo preserver Betty Dunker­ley. Place 3's Jennifer Kim, defeated by newcomer Randi Shade, was consigned to the one-term dustbin, and the influence of Responsible Growth for Northcross crested and waned. Forum overload led to voter fatigue; when the candidates outnumber the audience, douse the lights! 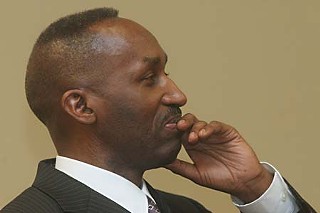 4) What Color Is the Contract? In August, the new city manager's honeymoon came to an end when a group of Hispanic business and community leaders leaked word of their bruised feelings to the Statesman: The group felt disrespected when they met with Ott to discuss their concerns. Local media played the black/brown angle hard, missing the Big Green Question: Whose ox is getting gored on minority contracting? Council rallied behind its hire and celebrated "diversity." Is everybody singing?

5) All Together Now! ... Start Bailing The most distinct contrast between Marc Ott and his predecessor was in the budget process. Futrell delivered thoroughly baked budget presentations, leaving council only crumbs for quibbling; Ott instead got councilors on board early. Alas, transparency hasn't eased recessionary decisions. The 2009 budget cuts parks maintenance and shutters branch libraries for additional hours – and with tax receipts still falling, the new year forecast ain't sunny.

6) The Music Smokes! Still a work in progress, the Live Music Task Force was the feel-good story of the year. While all we got was a presentation to council, there appears to be the official will supporting the chief recommendation – a new music department to promote the scene. And could there have been a more moving tableau than a capacity crowd of musicians and supporters sardined into City Hall? Chambers never smelled so strongly of tobacco.

7) The Long Dying of Single-Member Districts The never-ending story returns ... again. There was a slim hope that council might consider proposing long-pondered geographic representation – officially dashed in the spring, when council voted 6-1 against a November charter ballot. See ya in another two years ... again.

8) Street Closures Drove Us Batty Along with every new art festival, concert, or marathon comes closure for major thoroughfares. This year, the incessant detours came to a head when organizers of the fledgling Batfest asked to close Congress Avenue Bridge over Labor Day weekend. Businesses blanched, council balked, and the event moved one bridge west. Have we reached a limit? Maybe.

9) NIMBYism: Not Just for the Middle Class In a somewhat dispiriting trend, council was assailed with requests to keep the nefarious, dastardly "other" from staking a toehold in anyone's community: low-income housing on Manor Road; a home for the homeless off Highway 183, but not remote enough for the neighbors; and most lament­able, a health-care clinic – still planned – on Braker Lane.

10) In the Dumper Refuse generated festering council heat, as Solid Waste Services kept putting its worst foot forward. The expandable BFI landfill, the uncertain switch to single-stream recycling, the proposal (and abandonment) of new residential rate tiers during the budget, and city abandonment of plans to build its own recycling center – after sinking more than a million dollars into the project. Project 2009: Clean up this mess!

Nationally and locally, it was a banner year for politics – and the Chronicle's video-blogs City Hall Hustle and Hail to the Hustle were there. We've compiled the Hustle's Top 10 moments online at austinchronicle.com/hustle, but allow us to enumerate in print the Hust's year-end retrospective.

10) City Council Takes Their Places A look at the Hust during the May elections.

9) Hail to the Hustle Begins The Hustle goes national.

7) Alex Jones vs. Michelle Malkin What more can you say?

3) John Cornyn Jacks the Hustle Again, what more can you say?