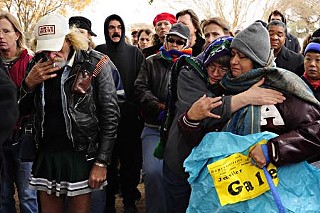 Mary Anderson and Clotilde Sofikitis (at right) console each other Sunday during a memorial service for Jennifer Gale, a notable homeless Austinite, who was found dead Dec. 17 outside a campus-area church. The service drew about 80 people, including homeless icon Leslie (wearing a "Dirty Deeds" cap), some City Council members, and other politicos. The crowd sang "Silent Night" – the last song Gale sang at a public meeting. (Photo by Sandy Carson)

• More Adults Behind Bars One in every 31 adults in the U.S. was either incarcerated or under community supervision at the end of 2007, according to new prison and jail statistics released Dec. 11 by the Department of Justice's Bureau of Justice Statistics. The new BJS numbers for 2007 (the most recent available) show an increase in the number of U.S. residents who were incarcerated last year, up 1.5% from 2006, for a total of 2.3 million. Including individuals on parole or probation, a record 7.3 million were under control of the criminal justice system as of Dec. 31, 2007. Texas ranked No. 1 in the number of people on probation at year end (434,309) and No. 2, second to California, for the number of people on parole (101,748). Texas also earned the dubious honor of being first, by far, in the number of inmates housed in privately owned prisons, with a whopping 11% of the prison population residing in private facilities. Among the U.S. prison population, black males are still grossly overrepresented, at 39% of the prison population compared to just more than 12% of the entire male population. – Jordan Smith

• Texas Dems Loyal After All Conventional wisdom says that the Lone Star State is full of loyal Republicans. But a recent study of straight-ticket voting by Austin Community College's Center for Public Policy and Political Studies shows that when it comes to party loyalty, Democrats do almost as well as Republicans. What tipped the state to Republicans in 2008, the study shows, was swing votes, which went for the GOP in the presidential and U.S. Senate races by about a 2-to-1 margin. Prepared by associate history professor Larry Willoughby, the report shows that straight-ticket voters – those who cast all the votes on their ballot for just one party – barely favored the Republicans, at 50.3% vs. 48.9% who voted Democratic. Straight-ticket votes accounted for 57.6% of all votes cast. Among the remaining voters who didn't stick to just one party, however, 63.1% went for John McCain for president and 63.9% went for John Cornyn for senator. Democrats can possibly take some comfort, however: Texas is seeing its biggest population growth in urban areas, and in the nine most populous counties, Dems won straight-ticket voting 52.7% to 46.5%. This year's number of straight-ticket voters was the largest in history. – Lee Nichols

• New Rail Division for TXDOT? The Texas Sunset Advisory Commission called Dec. 16 for a new rail division within the Texas Depart­ment of Transportation – which, despite its name, has never attended to anything but roads. The move drew quick praise from the nonprofit Texas Rail Relocation and Improvement Association. "Transportation in Texas is about much more than just roads," said association co-Chair Nelson Wolff, a Bexar Co. judge. "It's crucial that a division be established within TxDOT to focus on passenger and freight rail as a complement to roads." Seven other states have similar rail agencies. The Sunset review should stir much debate among state lawmakers during the legislative session that begins in January. The association will recommend options for funding that would enable relocation and improvement of freight rail lines around the state. The coalition is pushing for state action to leverage billions of dollars in bonding authority, which could finally put monies into the voter-approved state Rail Relocation and Improve­ment Fund approved in 2005. On Dec. 19, state Sen. John Carona of Dallas, chairman of the Texas Senate Transport­a­tion and Homeland Security Committee, filed Senate Bill 383, which would deposit $200 million annually from motor-vehicle sales and use taxes into the fund – to be managed by the new TxDOT division. – Katherine Gregor

• Reagan's Rising Star Could native Austinite Ron Kirk's ascension to a cabinet position save Reagan High School? Austin state Rep. Dawnna Dukes hopes so, judging from her pitch last week to about 200 students and parents at a holiday dinner in Reagan's cafeteria. Reagan is on the list of low-performing schools that Education Commissioner Robert Scott could choose to close. Dukes reminded the crowd that Kirk graduated from Reagan (as did Dukes and Rep. Donna How­ard). The former Dallas mayor was tapped Dec. 18 to serve as U.S. trade representative under President-elect Barack Obama. "Let's make sure Ron Kirk is not the last appointee to the Cabinet of the United States of America who was an alum of Reagan High School," Dukes told the crowd. The holiday event included a video of students who talked about the impact Reagan's closing would have on them. Community organizer Allen Weeks, meanwhile, cheerfully told of recent gains made on test scores and greater community participation in school events. – Kimberley Reeves

• More FLDS Cases Dismissed Texas' Child Protective Ser­vices has asked the Schleicher Co. court to dismiss yet more cases involving children taken last spring from the Yearn­ing for Zion Ranch outside Eldorado, home to members of the Mormon breakaway sect the Fundamentalist Church of Jesus Christ of Latter-day Saints. More than 400 children were originally taken, but with the most recent dismissals, which involved 17 children, only 19 were left under the court's jurisdiction at press time. Meanwhile, only one child – a girl who at age 12 was allegedly married to the FLDS imprisoned polygamist prophet Warren Jeffs – remained in foster care. "The remaining cases include three cases in which the department has temporary managing conservatorship of one or more children in the family," CPS spokesman Patrick Crimmins told the Deseret News. "We are continuing to provide services to these families and to work with [them] to address safety concerns." Meanwhile, the Schleich­er Co. grand jury ended its term without issuing any further indictments against FLDS members. So far, the grand jury has indicted 12 FLDS members, including Jeffs, on charges ranging from bigamy to aggravated sexual assault of a child. – Jordan Smith 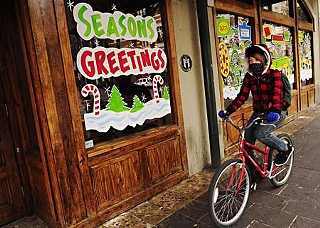 A bicyclist keeps warm as she rides down Sixth Street, past Buffalo Billiards. (Photo by Sandy Carson)

• Two Strikes Against UT Athletics Universities with top-notch athletic programs are dropping the ball when it comes to educating student athletes, according to a study released recently by Higher Ed Watch, a higher-education news website. For the second year in a row, the Academic Bowl Championship Series poll ranked University of Texas 24th out of 25 schools. To construct the rankings, the site used indicators such as graduation rates and Academic Progress Rates, which are a real-time measure of an athlete's progress toward a degree. The study further deducted points for disparities between black and white players and between the team and the school as a whole. This was one area where UT took a big hit. At the average university, 55% of athletes graduate within six years or less. According to the report, UT is a perennial underachiever, graduating 40% of its players and only 27% of its black players vs. an average graduation rate of 75% for the rest of the school. The report admonished the university for failing student athletes: "Texas' football players put the University on the national stage. And what do they get in return? Besides the precious few that will make it to the NFL, most will leave school without a degree and with few career prospects." – Justin Ward 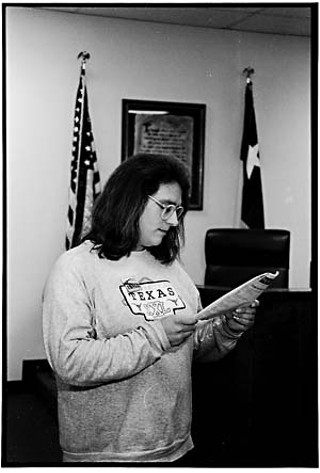 In the wake of the untimely death of perennial City Council candidate and gadfly Jennifer Gale, public sympathy with her homelessness – she died, of yet unconfirmed causes, while sleeping outside Wednesday morning, Dec. 17 – has led to misleading speculation about the circumstances of her death.

A Burnt Orange Report blog posting by Karl-Thomas Musselman quoted an e-mail from Marti Bier (aide to City Council Member Randi Shade) describing Gale as a "trans[gender] woman living in a transphobic society" and therefore with "nowhere ... to go to protect herself from the cold [last] night."

Bier's sympathetic rumor had become conventional wisdom by Thursday's council meeting, and a subsequent press release by Equality Texas was headlined in part, "Her death can be directly attributed to lack of shelters accepting of transgender homeless."

In fact, a somewhat embarrassed Bier says now, that's not true. She says she had confused a story she'd heard about another transgender woman's bad experience at a local shelter with Gale and that she has since contacted both the Salvation Army and the Austin Resource Center for the Homeless. Both shelters say they do what they can to accommodate all homeless people, regardless of gender status, although they do have to adjust accommodations to particular circumstances. "I think I was trying to call attention to the problem of transwomen accessing services," Bier said.

Although we're still inquiring, there is in fact currently no evidence that Gale was ever refused shelter or indeed that she had ever requested it. – Michael King

Get Ye to the Garden

Songbirds, squirrels, and lizards: Welcome! If critters could read, that's how they'd interpret the "Certified Wildlife Habitat" signs dotting yards around Austin. The Jester Estates neighborhood recently took first place in the city of Austin's Habitat Challenge, encouraging people to create pocket habitats in their own back yards. Jester residents added 36 new National Wildlife Federation-certified habitats to their neighborhood within the challenge period. The Allandale and Highland Park West neighborhoods came in second and third places, respectively. The city as a whole is certified as an NWF community wildlife habitat (the program is synergistic with policies such as the Austin Climate Protection Plan and Water Conservation Plan), and schools, businesses, churches, and community gardens are eligible to become certified habitats, as well. This next month is a great time of year in Austin to put in new trees and shrubs: For info on specific topics – including habitat certifications, current community projects, invasive plant removal, and becoming a habitat steward – visit www.keepaustinwild.com. Other helpful resources include www.nwf.org/gardenforwildlife and the city guide "Grow Green Plant Guide of Native & Adapted Plants," available at www.cityofaustin.org. – Katherine Gregor 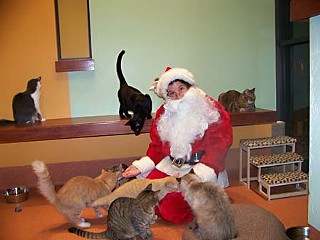 It was all pooch and circumstance at City Hall Dec. 11 for the local kickoff of the Iams Home 4 the Holidays 2008 pet adoption drive. By Jan. 5, 2,500 participating shelters and rescue organizations, including Town Lake Animal Center and the Austin Humane Society, aim to place 1 million homeless pets with new owners. On hand was Mayor Will Wynn, delivering a proclamation from Council Chambers that "Staff and volunteers ... are devoting their time, resources, and energy to placing orphaned animals into loving, lifelong homes." Outside, dogs paraded from TLAC to the plaza. Such events represent "the collaborative efforts aimed at helping all of Austin's pets," said Karen Medicus, of Mission: Orange, a project of the American Society for the Prevention of Cruelty to Animals. TLAC has adopted out 72 cats and 124 dogs since Dec. 1, according to event spokeswoman Meredith Michelson. For info on adopting a pet this holiday season, see www.cityofaustin.org/tlac and www.austinhumanesociety.org. – Patricia J. Ruland