Are Kids Really Kicking the Habit? 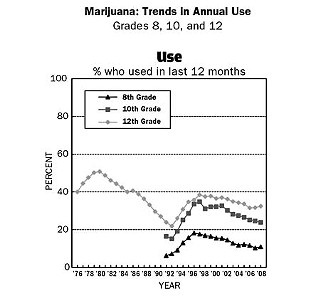 Here's a bit of good news: Teen use of illicit drugs did not increase appreciably in 2008, according to the annual Monitoring the Future study of kids across the country in grades eight, 10, and 12. Here's an even better bit of news: Teen booze-drinking and cigarette-smoking has declined significantly since 1991, the first year teens in all three grades were surveyed. For example, 70% of eighth-graders admitted to having used alcohol in 1991; in 2008, that number had dropped to just 39%. Equally dramatic is the decline in tobacco use: At each grade level, cigarette use has decreased by 50% since 1991. And, finally, here's a bit of not positive but nonetheless unsurprising news: Teen use of other drugs has actually increased since 1991 for all three grades (up from 30.6% in 1991 for 10th-graders, for example, to 34.1% in 2008) – as has teen use of marijuana in particular, which remains the most widely used of the government-prohibited drugs.

Those are the bare facts – a quick summary of the findings of this year's survey. So, how did President George W. Bush and, perhaps more importantly, federal drug czar John Walters (head of the White House Office of National Drug Control Policy) present the news to the public? Here's what Walters had to say at a Dec. 11 press conference: "The use of drugs has dropped broadly, steeply, and rapidly, while the supply of these poisons has been cut dramatically. Taken together, this impact is historically unprecedented." Wait. What? "No question there's still work to do in America, but we are making progress," said Bush. Seriously: What are they smoking?

Okay, to be fair, Bush and Walters aren't talking about the overall efforts of the War on Drugs. Rather, their claim that drug use is down and that progress is being made is predicated on a small subset of numbers, those for teen drug use since 2001 – and, in particular, for marijuana use (against which Walters has used his office to rail for nearly a decade). Through that narrow lens it might appear that drug use has decreased among adolescents. For example, among 12th-graders, 49% reported in 2001 that they'd tried pot during their lives, while in 2008 that number dropped to 42.6%. And current use among high school seniors (that is, use within the previous 30 days), dropped from 22.4% in 2001 to 19.4% in 2008. But as with most "wins" in the drug war, it's best not to look much closer.

Indeed, if Walters et al. want to take credit for those declines, then they also have to take credit for the not-so-great news found in the most recent data – including, for example, that current use of marijuana by eighth-and 12th-graders increased this year from 2007. And that while pot use is down in 2008 compared to the first year of the Bush presidency, use hasn't been on a steady decline; rather, use rates fluctuated over the seven years of which Walters is apparently so proud. (And, if they're going to take credit for the declines, then they'll also have to take credit for the increases posted in other areas, such as the use of LSD and other hallucinogens.) Unlike Walters, National Institute on Drug Abuse Director Nora Volkow was more reserved in her assessments: "While the long-term general decline is encouraging, especially for cigarettes and alcohol, some of the other findings this year amplify our concerns for potential problems in the future – especially the nonmedical use of prescription drugs." Hardly the backslapping self-congratulations offered by Walters and his crew.

Perhaps the most interesting information in this year's MTF survey is this: The percentage of teens that smoke marijuana is nearly equal now to the percentage that smoke cigarettes. The difference, of course, is that for cigarettes, the new numbers represent years of declining use, while the pot numbers reflect years of increasing use. The other difference, of course, is that cigarettes are legal – and regulated – and that pot is still a black-market product whose use is completely outside government regulation. Regulation is obviously not perfect – if it were, teens would have no access to cigarettes. But thanks in part to federal legislation passed in 1992 and implemented by the Substance Abuse and Mental Health Services Admini­stra­tion, illegal sales of cigarettes to minors by retailers have dropped significantly – from an overall 40% violation rate by retailers in 1997 to just 10.5% in 2008.

"Regulation isn't perfect, but it does work for the most part," says Bruce Mirken, communications director for the Marijuana Policy Project. And, notably, as long as pot remains illegal, we "have absolutely no ability to control who sells it" or who's doing it.

Can't get enough "Reefer Madness"? Visit the archives at austinchronicle.com/reefer. 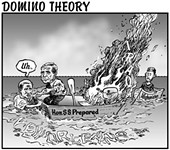