How to Bankrupt a Media Company and Survive; and Diminishing the Stench in Congress

How to Bankrupt a Media Company and Survive

Sam Zell is a media baron – even though he knows less about the news business than a hog knows about Christmas.

His actual line of work has been real estate huckstering – buying properties on the cheap from people who are in bad straits, then selling high. This business tactic earned him a less-than-flattering nickname: the Grave Dancer.

A year ago, Zell picked up another property, the Tribune Co., which owns 10 newspapers and 23 television stations. To gain control of these media outlets, he put up only $315 million – less than 4% of the $8.2 billion purchase price. How did he finance the rest? By borrowing billions from Bank of America, Citigroup, and other Wall Street firms, using the Tribune Co.'s employee pension fund as his collateral.

Zell's borrowing spree put an intolerable debt load on the company – it owes $900 million just in interest payments in 2009, for example. To pay the bankers, he's been butchering his own product by slashing newsroom staffs and trying to substitute marketing for journalism. This strategy hasn't worked, and now he has had to push the company into bankruptcy.

Zell and his banker buddies are going to be just fine, however, for they set up their arrangement so they are first in line to recover money from the bankruptcy proceedings. Citigroup, for example, already got $36 million in fees last year for packaging Zell's purchase of the company and has grabbed millions more in payments for its loans to Zell. Now the bank expects to get most of its original investment back.

Meanwhile, the thousands of reporters and others who actually produce Zell's product are at the tail end of the bankruptcy line, and they're likely to be stiffed, losing their jobs, pensions, and other payments they earned. In a just world, Zell would not be in bankruptcy court – he'd be on trial for grand theft.

Diminishing the Stench in Congress

Perhaps you are as excited as I am that, at long last, our Congress critters have delivered for us!

Health care for all, you ask? No, not that. A real economic recovery program? Uh ... no. An end to the Iraq war? No, again. Instead, what the lawmakers have produced for us is (hold on to your hat, now) a new Capitol Visitor Center!

Yes, if you and your family go to Washington to absorb a bit of the majesty of our country's democratic institutions, a brand-spanking-new 580,000-square-foot facility is now open for you and me – America's hoi polloi. So, instead of standing in line outside the Capitol building to take a tour, we can stand in line inside the center. At least it's air-conditioned.

And having AC turns out to have been a big selling point to get congressional leaders to spend $621 million for this tourist holding pen. It's not that they're concerned about the creature comfort of the 3 million folks who trek through the Capitol each year – it's that they don't want to have to smell us.

Smell us? Yes. Senate Majority Leader Harry Reid announced that the center solves one of our country's most pressing problems: stinky constituents. At the opening ceremony for the facility, Reid offered this homage to the common citizen: "My staff tells me not to say this, but I'm going to say it anyway. In the summer, because of the heat and high humidity, you could literally smell the tourists coming into the Capitol. Well, that is no longer going to be necessary."

It's good to know that the sweaty masses will no longer be quite so offensive to our finicky salons – but wouldn't it have been cheaper just to have the guards hose us down as we enter the marble halls? Besides, with all the stench that constantly comes out of Congress, who knew that a senator's nostrils could even detect BO? 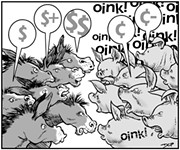