Local public-safety agencies will be asked to trim, rather than hack, their respective budgets

Tweet
print
write a letter
Assistant City Manager Mike McDonald told members of Austin's Public Safety Task Force – and members of the city's three public-safety agencies who were attending the group's Monday meeting – that it's uncertain whether their departments will have to cut 2% from their next year's budget. Rather, he said, the chiefs of Austin's EMS, Police Department, and Fire Department have been asked by City Hall to ask themselves, "If you had to cut 2 percent, what would that look like?" McDonald said. He said the city doesn't plan to make across-the-board cuts and that proportional cuts are not necessarily on the agenda. McDonald says he's meeting with the three chiefs this week to see what cuts they think they could make and will then review those possible cost cuts next week with the city's finance honchos. "At that point, a lot of things come off the table," McDonald said, because it becomes obvious that certain things just can't be cut.

Council Members Lee Leffingwell and Mike Martinez, who is chair of the task force, agreed that they would not endorse across-the-board cuts to public safety. "I would not support that," said Leffingwell, who noted that he didn't think that "furloughing" city employees and freezing positions, which the city did during the last downturn, was very prudent (it was a "draconian" way to ease the budget, he said, and has left the city woefully short of manpower in certain departments – such as Code Enforcement). Additionally, Martinez said he doesn't necessarily think every department should be subject to the cuts – for example, EMS already canceled one cadet class to save money, and the question remains: "What additional cuts [could we] make without effecting services?" he asked. "I think that's going to be very thin." 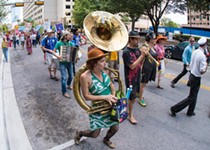