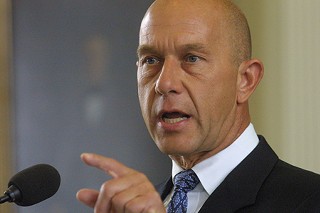 In September, Austin attorney Derek How­ard received another batch of narratives written by female inmates alleging they were severely and shamelessly mistreated while incarcerated at one of several of the state's Substance Abuse Felony Punishment Facilities (aka "SAFPF"), which are charged with the statutory responsibility of rehabilitating drug and alcohol offenders. Writing from the Hackberry Unit in Gatesville, one inmate had posed a question: What would state senators do about SAFPF if they found out what it was really like?

During Nov. 13 interim charge hearings conducted by the Senate Criminal Justice Committee, chaired by Houston Sen. John Whitmire, the inmate's question was answered – but not as she might have hoped. Despite a growing pile of inmate reports accumulating over the last year – personal narratives that graphically recount "mind-crushing" torment, even torture, suffered by SAFPF inmates – the committee blithely looked the other way, praising SAFPF personnel and exchanging drunk jokes with them during the hearing. Whitmire declared of SAFPF, "We'd be in a hell of a mess without it."

That many inmates describe SAFPF as a state-funded hell on earth was of little consequence to the committee. As reported in the Chronicle ("Rehabilitation or Torture?" May 23), inmates claim that staff members force them to sit in chairs for long hours and days, for weeks and months on end, in a global punishment known as "tighthouse"; compel SAFPF "sisters" to verbally berate each other during "family" time; routinely call inmates "whores," "bitches," and bad mothers; and mockingly dispense "miracle water" rather than medicine for serious conditions. Numer­ous inmates contend that SAFPF is worse than prison and a far cry from healthy rehabilitation.

Earlier this year, following the initial reports of inmate charges, Whitmire's committee announced that this interim hearing would focus on SAFPF procedures. But by August, specific mention of SAFPF had dropped off the hearing agenda. Asked why, a committee aide said: "There's not enough evidence. ... We're not going to hold hearings based on your article" – or based on the growing pile of inmate testimonials, apparently.

At last month's Senate hearings to review, among other things, the state's privately run prisons and related programs, Whitmire was caught off guard by the testimony of Kerry Wolf, former inmate of the Hackberry "special needs" SAFPF unit in Gatesville. "Obviously, you've come to support SAFPF," the senator began. "Did it work?" Wolf answered, "I was appalled by the human rights abuses and torture that went on in the name of treatment." She'd sat through tighthouse herself. "I saw inmates who were already mentally fragile losing their minds, running around, tearing out their hair, falling out of chairs onto the floor, having seizures, fainting, or hallucinating," Wolf said. As for "peer-driven" therapy, she told the committee, it was "Lord of the Flies run amok."

But Wolf was the lone SAFPF critic that day. A dismissive Whitmire implied that she'd been out of SAFPF too long for her testimony to matter, sighing in relief, "Ohhhhh ... there's been a lot of changes since then" (Wolf was in SAFPF from 2001 to 2002). Whitmire quickly lost interest, and during most of her testimony, he fidgeted and whispered to an aide. Michael Giniger took the mic and promptly discredited Wolf. "I am vice president of Gateway Foundation, the organization that this woman claims tortures people in our SAFPF facilities, which we don't. I ... tell you as I told you before, the SAFPF programs that are offered here in Texas ... are by far the best offered in the country." He pointed to 2003 "outcome studies," conducted by the Texas Criminal Justice Policy Council, which showed "astonishingly good outcomes." Unsurpris­ing­ly, Whitmire didn't point out that those studies also covered the years when Wolf was at SAFPF. Wolf left the hearings in tears. "I can't stand to listen to this," she said.

Witness Shirley Otto, a counselor at Hack­berry for three years, denied any abuses and defended tighthouse as "an adult time-out." She herself had actually gone through the program, as have other SAFPF counselors. Speaking of her stay, she said, "I needed some intensive 'behavior modification,'" a phrase other inmates describe as ominous. "We're supportive of SAFP and love to hear from people like you," Whitmire responded, probing no further. "Let's celebrate your sobriety."

Counselor Becky Green (who left SAFPF in 1997) defended SAFPF's methods, saying, "There are reasons we do what we do," and, "There's no other program better than this." Her comments echoed the Gateway official's disclaimer that some of the methods Gate­way uses as "treatment" are "not comfortable." His talk might have been part sales pitch, too – the state again is seeking a contractor to provide 63 million dollars' worth of new SAFPF beds. Outside the hearing room, a woman (who asked that her name be withheld) spoke to the Chronicle on her own behalf and corroborated key inmate claims of abuse, based on her 2005 experience at Hackberry. She recalled being confined to "chairs" from about 4am to 8pm for a week. Inmates were given peanut-butter sandwiches three times a day, save for an occasional burrito. She heard inmates called "bitches" and "whores," and confirmed they were shamed for "sucking glass dick" (i.e., smoking crack). She said she complained about SAFPF "all the time" during her stay but explained, "My complaints weren't valid." Asked whether abuses aided her recovery, she said, "somewhat."

Following the hearing, Whitmire was asked whether being called "bitches" and "whores" should be part of the state's rehabilitative regimen. "None of us thinks it should," he told the Chronicle. "If they're doing that, they should stop." John Moriarty, state inspector general over the Texas Department of Criminal Justice, refused to answer that question. Moriarty did say that his office has completed a review of SAFPFs and that no civil rights laws or state policies have been violated.

Although Whitmire believes SAFPFs have changed for the better, inmates remain skeptical that cosmetic changes – such as renaming the still-enforced tighthouse "reflection house" – will have a beneficial effect. "When or if public officials come [for inspection], they will change [SAFPF] to look presentable, but as soon as they leave, we'll be treated like garbage," one inmate from the Halbert Unit wrote on Sept. 3.

Inmates still report being called "dope fiends" and being assigned childish tasks such as coloring and singing nursery rhymes. One inmate described watching pus drip from her untreated staph infection as she was forced to clean showers. Another said she witnessed the jovial Otto yelling at an inmate who had smiled at her, "Don't smile!"; this inmate also recounted urinating in her underwear after being denied a bathroom trip. Another inmate said that during tighthouse, a clinical supervisor taunted, "Y'all don't want to go out there and continue to be crack whores, do you?"

The stream of letters to attorney Howard abruptly stopped in September. Was it the systemwide lockdown resulting from a recent death row threat on Whitmire's life? Was it because inmates learned there would be no lawsuit, due to the expense? Another letter may provide another possible answer: Inmates were being threatened with solitary confinement if they tried to get the word out about alleged SAFPF abuses.

According to another narrative, in October inmates were supposed to "model" sitting "appropriately" in chairs for "observers" during a "media event." (The Chronicle was not invited.) If they were among the official observers, legislators might ask themselves: Just how can SAFPF be improved, if lawmakers remain indifferent to inmates' pleas for help? Will 'Safe-P' and TDCJ Be Held Accountable?
Legislative committee will hear testimony on a controversial substance abuse treatment program