In a cost-cutting move, Capital Metro switches four of its bus routes to cheaper contractors 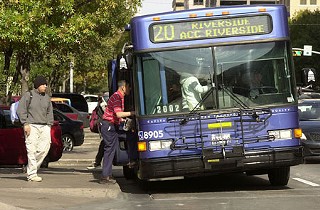 Riders board a Capital Metro bus on a route operated by the agency's main contractor, StarTran; next year, two other contractors will carry some of the load for less money. (Photo by John Anderson)

During a three-day strike by many of its drivers last month, Capital Metro faced numerous accusations from Amalgamated Transit Union Local 1091 that it was engaging in union-busting. As it turns out, Cap Metro was putting fuel on that fire even while the strike was ongoing.

In a letter dated Nov. 7, two days into the strike, Cap Metro CEO Fred Gilliam informed StarTran Inc. – the contractor through which most Cap Metro drivers and mechanics are employed and technically the actual target of the strike – that the transit agency would be moving some routes to cheaper contractors. "As a result of the instability of StarTran's workforce, Capital Metro must take steps to ensure that our services will be provided in a consistent and reliable manner for our community," Gilliam wrote to StarTran General Manager Terry Garcia Crews. "Effective with the January service change, if not sooner, Capital Metro will be moving [four] routes currently operated by StarTran to other contractors."

"Capital Metro is making these adjustments for good economic reasons," said Cap Metro spokesman Adam Shaivitz. "We are facing the same financial realties that every other government organization is facing. For the first two months of the fiscal year, revenues are more than $2 million below budget. We are working diligently to try to avoid cutting services or laying off employees.

"These route assignments will save about $1.5 million annually in wages, benefits, fuel, and nonrevenue/deadhead time [buses traveling from or to the garage at the beginning or end of a route]," Shaivitz said.

The "good economic reason" is pretty simple, says ATU President Jay Wyatt: Veolia's and First Transit's workers get paid less. Although their work forces are also represented by ATU, they have separate and less lucrative contracts than StarTran workers.

Cap Metro contracts out its work force because state law forbids it from engaging in collective bargaining, but federal law requires it in order to receive federal funds. Thus, Cap Metro created StarTran to hire most of the drivers. (Veolia and First Transit are based in Illinois – via France – and Ohio, respectively.)

This twisted little shell game creates a situation where different employees get different wages and benefits, despite essentially all running out of the same Cap Metro headquarters, Wyatt says. "Capital Metro provides everything to those subcontractors," he says. "All they have to do is walk in the door with a pad and a [pen]. [Capital Metro] has all the equipment: They have the office equipment, buses; they pay for the gas; they pay for insurance, everything. So what happens is, these companies like Veolia and First Transit, they make a profit. They don't come over here to do this work for free. So the profit that they make takes away from the wages and benefits of the employees that work for them. So that's how they save money."

ATU has filed a grievance with Capital Metro claiming that the route shifts violate a 2005 arbitration agreement with StarTran and the workers' rights under the National Labor Relations Act.