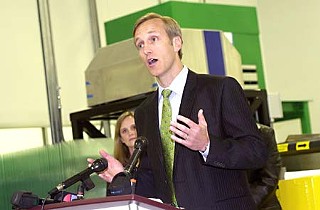 Mayor Pro Tem Brewster McCracken on Monday announced his bid for mayor, the first candidate to jump into a race that is expected to draw at least three other serious contenders. See "City Hall Hustle" for more mayoral campaign news. (Photo by John Anderson)

• APD Ready to Cite and Release Austin Police Chief Art Acevedo says his department is putting the finishing touches on a new citation form that will be integral to the January implementation of the state's cite-and-release law, which allows officers to issue citations for some low-level nonviolent misdemeanors – including simple possession of up to 4 ounces of marijuana – instead of taking offenders in for a night at the Travis County Jail. Passed by state lawmakers last year, the citation law does not change the potential criminal penalties associated with the offenses it covers but should save money and ease jail crowding. Although Acevedo initially didn't seem enthusiastic about implementing the law, he's now fully on board and has tried to bring Hays and Williamson counties into the fold as well, to make a uniform policy for all of the city of Austin. Williamson and Hays are interested, Acevedo said, but aren't yet ready to move forward. So the Austin Police Department will strike out first, implementing the policy next month. They join the Travis County Sheriff's Office in utilizing the citation option, which the TCSO has been using since it became law in September 2007. – Jordan Smith

• Finding Dough for Relo Relocating freight rail lines around the state – primarily to free up urban corridors for passenger rail – promises to be a hot topic in the next legislative session. In preparation, the Texas Rail Relocation and Improve­ment Association, a new coalition of transportation advocates, kicked off its Rail Relo Now! campaign on Dec. 4. "Our state cannot simply build more and more roads without rail being incorporated into transportation plans across the state," said co-chair and Bexar Co. Judge Nelson Wolff. Texas voters passed a constitutional amendment establishing the state Rail Reloca­tion and Improvement Fund in 2005 – but legislators never put any money into it. The association seeks a project-funding approach that could leverage billions of dollars in bonding authority. That could allow the relocation of freight service from Austin to San Antonio – improving highway congestion and lowering emissions from trucking. According to the association, "Federal studies show freight rail is five times more fuel-efficient and pollutes one-third less than comparable goods moving by truck." The association also cited a 2004 study that found, in Texas, every $1 million spent on a passenger rail system resulted in an estimated $2 million in regional economic impact. For more info, visit www.railrelo.org. – Katherine Gregor

• AISD Gets Better and Worse Talk about mixed results: Austin Independent School District has more troubled campuses than last year – but its best schools are excelling at a faster rate than those troubled campuses are failing. In its newly published report, "The Urban Advantage," AISD confirms it has been classified as Academ­ic­al­ly Acceptable by the Texas Education Agency – 15 AISD campuses were rated exemplary, and 19 were "recognized," while 68 were classified as acceptable and 11 unacceptable. In 2007, only seven schools made exemplary status, and 18 were recognized, but only nine were unacceptable. Also, 85% of AISD campuses met the Adequate Yearly Progress standards laid out under the federal No Child Left Behind rules: not perfect, but better than the 75% statewide average. See the full report at www.austinisd.org/inside/initiatives/annual_report_2008. – Richard Whittaker

• Pay Up, Homeowners It's tax time again: Travis County has sent out 258,543 property-tax bills for the year. Homeowners in escrow should have had their bills sent directly to their mortgage lenders, but everyone else should watch for the dreaded annual envelope to arrive. "Some taxpayers believe that if they do not receive a bill, they are not liable for tax payment," said Tax Assessor Collector Nelda Wells Spears. "Taxpayers are responsible for requesting a tax bill if they do not receive one." Spears reminds taxpayers that payments must be postmarked by Dec. 31 to be deductible for this year. She also encourages seniors and people with disabilities to ask about the county's new installment plan. Visit www.traviscounty.org or call 854-9473 for further info. – R.W.

• Penalties for Pyros No rain means no rocket's red glare. As the Texas Forest Service has declared that Travis Co. is in a drought, on Dec. 9 county commissioners passed an ordinance banning bottle rockets in areas outside of city limits because of fears of wildfires (the city of Austin already has a permanent ban on fireworks within 5,000 feet of city limits). The new rule restricts the sale or use of "skyrockets with sticks" and "missiles with fins." Offense is a class C misdemeanor, punishable by a fine up to $500, and the ban stays in place until the drought order is lifted. – R.W.

• Dust Off Your Firearms, Nature Lovers On Dec. 5, the Department of the Interior confirmed it's overturning a 25-year-old ban on concealed firearms in national parks. When proposed in April, the new rules would only have allowed guns in national parks if they were also allowed in that state's parks. As finally introduced, Interior spokesman Chris Paolina said, "If you can carry [a gun] on Main Street, you are allowed to carry in a national park." The change is opposed by ecological and gun-control groups but also by park rangers and managers who fear it makes their jobs harder and more dangerous and expect more wild animals will die in "opportunity" shootings. Unsurprisingly, National Rifle Association chief lobbyist Chris W. Cox said he was "pleased" with the changes. – R.W.

Texas Demo­crats hungry for former state Comptroller John Sharp (pictured) to re-enter politics will finally get their wish. Sharp announced he's running for the U.S. Senate seat currently held (but likely to be vacated) by Kay Bailey Hutchison. Hutchison is widely expected to resign her seat so she can try to unseat fellow Republican Rick Perry from the Governor's Mansion in 2010. Even if she doesn't, Sharp, 58, says he isn't messing with the usual "exploratory committee" rigmarole: "I will be a candidate whether the election is 2012 or any time before then," he said in a press release. Sharp is a former state representative, state senator, railroad commissioner, and comptroller. In 1998, he came up short (48.19%) in his run against Perry (50.04%) for lieutenant governor, in the year the Dems were completely swept out of the upper echelon of Texas government. In 2002, he again tried for lite guv but lost to David Dewhurst. Since then, his name has always come up for statewide contests, but he has consistently declined entreaties to run in favor of staying with the Dallas-based financial management firm Ryan Inc. Sharp said he will file the required papers Jan. 1 and immediately begin raising money. – L.N.