City Hall Hustle: First One In

Tweet
print
write a letter
Housed in a nondescript facade of late-20th century office-park architecture, on an anonymous stretch of South Austin street, the clean-room white walls of solar-cell concern HelioVolt come as a surprise. It was here, flanked by supporters – not to mention all manner of esoteric, high-voltage machinery – that we saw the first official announcement of a major candidate for mayor: unmistakable political theatre. "With great humility and strong ­confidence in Austin's future, I am here to announce my candidacy for mayor," said two-term council member and Mayor Pro Tem Brewster McCracken.

Befitting the sci-fi environs, McCrack­en unveiled a multipoint platform for his candidacy, front-loaded with forward-looking endeavors: jump-starting a "21st century economy" powered by growth in green-collar jobs, digital entertainment, biotechnology, and health care; leading the advancement of clean, renewable energy through McCracken's smart-grid enterprise, the Pecan Street Project; and broadening Austin's standard of living through a 21st Century Careers job-training program and the creation of an Austin Endowment for Opportunity tailored for social-service investments. Compared to the previous points, the fourth plank – promises of neighborhood investments and improvements, a seemingly de rigueur requirement in the homeowner-empowered age of Austin politics – sounded comparatively dusty. But as a whole, the announcement was classic McCracken: heady and ambitious, an inspirational clarion call to supporters, and a load of hot air to nonbelievers. But even if McCracken earned no converts, the 100-person-plus crowd testified to the backing McCracken already has, if not the excitement and anticipation of Austin's political class for the mayoral and City Council elections in May. For some crowds, the Hustle among them, Novem­ber is just a warm-up.

Then, in a rather inspired bit of timing, an e-mail appeared in politicos' in-boxes all over town, just as McCracken was wrapping up his presser. Its subject? The formation of a new political action committee, Draft Lee Leffingwell for Mayor. Unwilling to let McCracken's announcement carry the day, Leffingwell supporter Ted Siff trumpeted his new PAC, created to support McCracken's current rival on the dais – and future rival at the polls. "Lee Leffingwell is the candidate that progressive Austinites can trust to take the helm at City Hall," said Siff, promising a website, rally, and official kickoff next week.

Leffingwell himself, it's widely known, can't officially wade into the mayoral race just yet. While McCracken's Place 5 City Council term expires in May (term limits and higher ambition preventing him from running for the same seat again), Leffing­well was re-elected to Place 1 only earlier this year. So if he officially declared now, the city would have to call a special election to fill the council seat under state "resign to run" laws – an expensive proposition in the midst of tight financial times and one Leffingwell declared he wouldn't foist on the city.

That hasn't stopped Leffingwell from hinting – none too subtly – at his ambitions. He told the Chronicle's Katherine Gregor back in the summer of 2007 that he was "definitely interested and very strongly considering it," and the whisper campaign has only grown louder ever since. Now there's some question as to whether, in his attempt to inch right up to the line, he may have crossed it. Monday evening, during its coverage of the McCrack­en announcement, KVUE news briefly featured Leffingwell, who said, "I feel a duty to make this attempt, so that's what I'm going to do." He's since tried to walk it back, telling local tip sheet In Fact Daily that it was a "slip of the tongue" and that he emphasized to KVUE's Steve Alberts he was doing nothing other than "seriously considering" the opportunity. Still, with his detractors trying to draw a foul, Leffingwell doesn't need to offer any unforced ones.

It may get stranger still: The latest chatter is that, behind the scenes, forces unsympathetic to Leffingwell's campaign are arguing that Jan. 10 – falling some 120 days out from the election, the date it's thought Leffingwell can formally declare and begin fundraising and campaigning without triggering a special election – is too early, the actual date falling in February or even later. The Hustle suspects even if this is being introduced only to confuse the issue and damage Leffingwell – as seems likely – it isn't the last time we'll hear about it.

If things seem like they're gearing up especially early – or are fraught with the potential to get especially ugly – well, welcome to the reality of Austin politics, where, in contrast to the official myth of "terminal democracy," only the big boys can afford to play.

To drive the point home, all you have to do is look to the star mayoral candidates of Austin's neighborhood crowd-cum-self-proclaimed progressives: former Council Members Jackie Goodman and Bill Spelman. Goodman dropped out before she even turned on, telling the Hustle she didn't have the resources "necessary to achieve the high-dollar campaign and organization that an Austin mayoral bid has come to mandate." Spelman demurred for similar reasons, saying he feared the divisiveness that would erupt from the run, electing instead to vie for McCracken's to-be-vacated Place 5.

Yet the problems Spelman would have faced running for mayor – candidates with more money and name recognition – are now his opponents' problems. While no one aside from incumbents and fringe candidates has officially declared for a council seat, conventional wisdom has the slate of serious contenders (such as former and present Planning commissioners Chris Riley and Perla Cavazos, respectively, and neighborhood activist Kathie Tovo) likely to run for Leffingwell's Place 1 seat, once it opens up.

When you consider the increasing cost of previous elections, factoring in an inflationary increase in political contribution limits (raising individual contributions to $350), you're looking at what will most certainly be the city's most expensive election. As evidenced by the contributions bowl at McCrack­en's kickoff, money matters – but is that the only real way to participate politically?

Closer to home, the current council convenes today (Thursday, Dec. 11) for its second-to-last meeting of the year. And falling in the midst of holiday crunch time, this agenda is longer than Old St. Nick's shit list (or your credit-card statement, whichever's bigger). Interestingly enough, there are some actual items of intrigue in there: Quizzically, McCracken brings two items, one automatically extending development site plan approvals by two years to a total of five (Item 68) and another asking the city manager to consider it (Item 69). The Hustle hears 68 is dead. Good – like White Lodging really needs any more of our help. Other highlights include hiring an outside legal team to examine whether city legal and staff overstepped their boundaries when they acquiesced to the controversial expansion of the BFI landfill in Northeast Austin, against expressed council policy (Item 71); the motion even takes the unusual step of naming the legal firm to hire, instead of leaving it to the city attor­ney's discretion. Think it's cold outside? It's could get positively frosty on the dais. 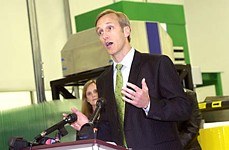 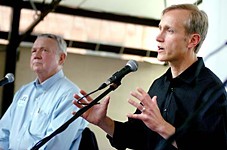