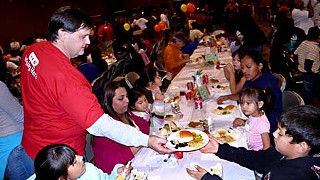 H-E-B's Feast of Sharing on Nov. 25 drew an estimated 10,000 people to the Palmer Events Center. (Photo by Sandy Carson)

• A HUTTO HOLIDAY Activists protesting T. Don Hutto Residential Center, which reportedly houses 293 adults and 92 children, will convene for a vigil on Dec. 7 in what has become a holiday tradition at the Taylor facility. The group will gather at 3:30pm on Austin Avenue, between Fourth and Fifth streets, and then walk to the Williamson County Courthouse, to challenge the facility's multimillion-dollar contract authorizing U.S. Immigration and Cus­toms Enforcement to use the facility to hold immigrants – including children and infants – who await deportation. Now in its third year, the contract – between Wil­liamson County, ICE, and contractor Corrections Corporation of Amer­ica – is up for renewal in January. According to a press release from Bor­der Ambassadors founder Jay J. Johnson-Castro Sr., the vigil will feature community leaders speaking "in support of alternatives to incarceration." Though liberating families is the ultimate goal, the event will also celebrate key victories. "As a result of the lawsuits brought by ACLU and the UT School of Law Immigration Clinic, detainees are now allowed to wear their own clothing," Johnson-Castro said, adding that the clinic recently succeeded in getting ICE to allow detainees to use phone cards that had been given to them (previously they were required to buy phone cards through CCA). Activists will collect donated gifts for child detainees, including new toys, books, music, candy, and warm clothing. For details, call Sherry Dana at 512/868-5181. – Patricia J. Ruland 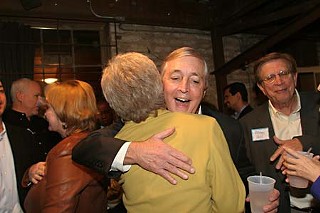 Travis Co. District Eternity … er … Attorney Ronnie Earle felt the love from friends and supporters who descended on Stubb’s Tuesday night for a reception in his honor. Earle is retiring from office and leaving the courthouse after serving for 32 years as the county’s top law enforcer. – Jordan Smith (Photo by Jana Birchum)

• PECAN STREET PROJECT PARTNERS At this week's Clean Energy Venture Summit, participants in Austin's Pecan Street Project – a collaborative initiative to design and develop a groundbreaking new clean energy infrastructure and business model – announced corporate partnerships with Dell, GE Energy, IBM, Oracle, Cisco Systems, Freescale, and others. The companies will offer staff resources and strategic guidance and help identify technologies to be beta-tested on the local electrical grid. Project participants include the city of Austin, Aus­tin Energy, UT's Austin Technology Incubator, the Austin Chamber of Commerce, and the Environmental Defense Fund. Together they are tackling infrastructure, technology, and policy challenges to the use of wind and solar power on a municipal scale. Solutions will be shared nationally and internationally. For more info, see "The Pecan Street Project," Oct. 3. – Katherine Gregor 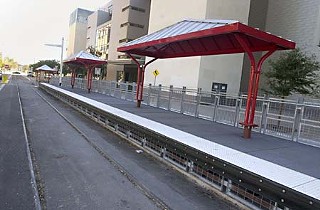 Capital Metro recently completed its Downtown MetroRail station, located a stone’s throw from the Convention Center, in preparation for the transit agency’s Red Line services set to roll out early next year. (Photo by John Anderson)

• UT REGENTS SUED OVER GALVESTON LAYOFFS The Texas Faculty Association is suing the UT board of regents over its decision to slash staff levels and services at the UT Medical Branch at Galveston in the wake of Hurricane Ike. In the suit, announced Dec. 1, the association alleges that the board's Nov. 12 closed-door meeting – at which it decided to fire 3,800 employees, including tenured staff – violated the Texas Open Meetings Act. (That the meeting was held at UT-El Paso – the UT system campus farthest from Galveston – hasn't gone over well, either.) The association is represented by attorney Joe Jaworski, who said, "This lawsuit seeks to shine some much needed light on the Regents' shocking decision." If the cuts stand, TFA Executive Director Tom Johnson said they will "render the recovery of this great city all but impossible." – Richard Whittaker 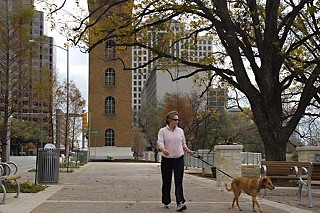 Downtown resident Donna Moncrief enjoys a morning jaunt with her dog along the newly completed esplanade on Cesar Chavez Street. The city’s $8.4 million project included a two-way traffic conversion on Cesar Chavez and design and landscape enhancements on the south side of the street. (Photo by Sandy Carson)

• Laredo Mayor Settles in First Amendment Case Score one for the alternative press: City of Laredo Mayor Raul Salinas has to pay LareDOS newspaper $15,000 after settling a First Amendment suit on Nov. 25. It goes back to June 4, 2007, when Salinas ordered city staff to remove all copies of the May/June issue of the publication from the City Convention and Visitors Bureau booth at Laredo Internation­al Airport (see "Naked City," Sept. 19). He was upset by the cover: a parody of 19th century Mexican artist José Guadalupe Posada's Calaveras print El Jarabe en Ultratumba (The Folk Dance Beyond the Grave), featuring Salinas and the City Council as skeletons dancing on money while his dog, Princess, looked on. In his response to the suit, Salinas admitted he'd broken the City Charter and called the case "a learning experience." LareDOS Publisher Meg Guerra called the settlement "the quickest way to get to the point that we wanted to, where he admitted what he did and told us why he did it." As for whether Salinas has really learned his lesson, she added, "We hope we'll have some behavior modification." – R.W.