AISD Teachers Get an A 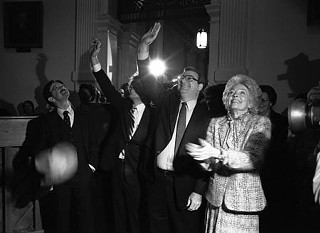 The Austin Independent School District has cleared another No Child Left Behind Act hurdle – by proving the quality of its teachers. The district announced last week that for the 2008-09 academic year, 4,839 (99.88%) of the district's 4,845 teachers are classified as highly qualified, and AISD hopes to reach 100% by Dec. 11. To achieve the classification of highly qualified, a teacher has to hold a bachelor's degree or better in the subject taught, have full state teacher certification, and demonstrate knowledge of the subject. AISD's qualifying teachers taught 12,755 (99.62%) of the 12,804 classes given in the 11 core subjects measured. Superin­tend­ent Pat Forgione said he was proud of the "high percentage of highly qualified teachers in Austin classrooms." All of which raises the question: Why does the Texas Education Agency think that forcing districts to get rid of 75% of a school's teachers when it repurposes a school (as it did with Johnston High School this year and looks set to do with Pearce Middle and Reagan High next) is a good idea? – Richard Whittaker

The Federal Emergency Management Agency has rejected housing repair claims for damage done by last July's Hurricane Dolly, and some Cameron and Hidalgo County residents are asking why. In a suit filed in the U.S. District Court in Brownsville, Texas RioGrande Legal Aid alleges that FEMA rejected an abnormally high number of applications from families in the Rio Grande Valley. The agency's reasoning? That the damage was not caused by the storm but by poor construction and bad maintenance, which made the buildings more prone to damage. TRLA attorney Jerome Wesevich argued that the agency used "unpublished and unascertainable" standards to exclude applicants, adding, "Their homes may not have been perfect before the hurricane, but that does not make them any less deserving of aid than a wealthy family." This is the third time that TRLA has sued FEMA for applying seemingly arbitrary standards in the wake of a hurricane; although settlements were reached in the other two cases, said TRLA Communications Director Cynthia Martinez, "Neither were victories – they were more compromises." – R.W.

ZooToo.com, which bills itself as "the leading networking site and resource for all pet lovers," is holding its second annual Shelter Makeover Contest. Designed to increase adoptions by enhancing cooperation between communities and shelters, it will award a $1 million shelter makeover to the winning entrant and $195,000 in cash prizes to 19 runners-up. Twenty-seven Texas shelters, including the Austin Humane Society and the Central Texas Society for the Prevention of Cruelty to Animals in Leander, are in the running, "which makes the state the second highest in participating shelters just below California," according to spokeswoman Megan O'Haus. The contest is divided into three phases: registration and point accumulation (until March 13, 2009), selection of 20 semifinalists based on point totals and of 10 finalists based on site visits, culminating in a public vote in late April. Shelters earn points when supporters log on to ZooToo's website to share opinions and advice and upload photos and videos, among many other activities. According to the latest tally, Austin Humane Society has racked up 22,447 points, and CTSPCA 15,739; top-ranking Liberty Humane Society, of New Jersey, has 267,821 points. To see how Austin-area pet lovers can close that lead, log on to www.zootoo.com/makeover. – Patricia J. Ruland

Americans Fail to Be Republican Enough

Media outlets nationwide are bemoaning the results of a study by the Intercol­leg­i­ate Studies Institute claiming that Americans know less than ever about America. The report, "Our Fading Heritage," says that, among the 2,508 randomly selected Americans who each answered a 33-question multiple-choice test, the average grade was 49%, a resounding F. But while most of the questions were straight out of a fifth-grade civics textbook (No. 3: "What are the three branches of government?"), some read like items of conservative political dogma (No. 30: "Which of the following fiscal policy combinations would a government most likely follow to stimulate economic activity when the econo­my is in a severe recession?"). So what exactly is the Intercolleg­iate Studies Institute? Founded by paleoconservative Frank Chodorov, its purpose is to build an intellectual right wing to counter perceived liberal bias in academia; its publishing arm promotes authors like anti-feminist Elizabeth Fox-Genovese and the gay-marriage-hating former U.S. Sen. Rick Santorum. – R.W.

At press time, Austin firefighters were voting on an employment contract that would offer modest pay raises over the next three years and guarantee pension benefits going forward. Still, a movement was afoot to nix the agreement, which took the firefighters union and city officials more than five months to negotiate. At issue, it seems, is a clause that would allow the fire chief to implement new hiring standards not already contained in the employment agreement. The idea, says City Council member and former Austin firefighter Mike Martinez, is to allow incoming Chief Rhoda Mae Kerr flexibility in trying new strategies to diversify the department. Apparently, this ambition hasn't been taken at face value by everyone. Bargaining team member and AFD battalion chief Bob Nicks wrote in an e-mail to firefighters that the contract gives up too much to management. Others argue that it would downgrade the quality of firefighters on the force; Martinez says that just isn't true, because the contract does nothing (nor could it by law) to change state standards, which stipulate that firefighters not only need to know how to fight fires but, for example, must also be certified emergency medical technicians. Union President Stephen Truesdell declined to comment while contract voting was ongoing. – Jordan Smith

Changing of the Guard at APA

In a stunning upset, Austin Police Association members have elected Sgt. Wayne Vincent to be the union's next president, taking over for retiring top dog Lt. George Vanderhule. Conventional wisdom had Vincent as an underdog in the race against Officer Wuthipong "Tank" Tantak­si­na­nukij, the union's current vice president. (Cpl. Mike Bowen won the No. 2 spot and will take over for Tantak­si­na­nuk­ij in January.) But when the votes were tallied earlier this month, Vincent won an 83% landslide, with 861 votes to Tantaksinanukij's 178. In the first board election since veteran President Mike Sheffield retired in 2006, more than 71% of the union's 1,465 members voted – more than the number who turned out to vote on the contract in September. Vincent has spent most of his 23 years with the department working patrol, and that might have won him the race. It appears that Vincent's message – that the union should be more responsive to the needs of cops on the street and should work to expand its community presence – resonated with beat cops. As a union official, Tantaksinanukij has worked hard for the rank-and-file, officers told the Chronicle, but nonetheless was tagged as out-of-touch with patrol and too friendly with Austin Police Department administration – in particular with Chief Art Acevedo. – J.S. 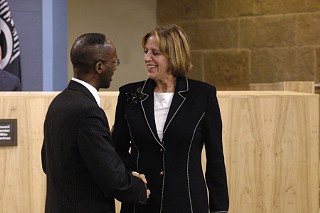 Listening in on LBJ

Courtesy of The LBJ Library and Museum

As the latest Texan in the White House starts packing up, we're about to learn a bit more about the first Texan to be commander-in-chief – and the last Lone Star Democrat to hold that position. It's been 40 years since the end of Lyndon Baines Johnson's presidency, and as part of the yearlong Centennial Celebration marking that anniversary, the LBJ Library and Museum is releasing recordings of his telephone conversations from his last nine months in the Oval Office, stretching from May 1968 through Janu­ary 1969. The period covered includes the assassination of Sen. Robert Kennedy and the election of President Richard Nixon. The recordings will be released Thursday, Dec. 4, at 9am and will be available online at www.lbjlib.utexas.edu.
– R.W.