Whoops! There goes another one; and watching the monochrome news. 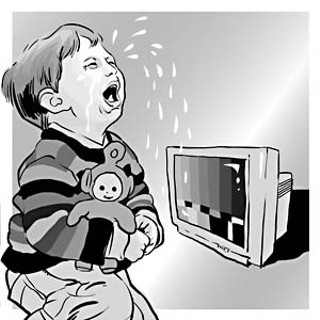 The Federal Communications Commission is investigating Time Warner Cable and other cable systems around the country over the practice of moving channels from analog to digital tiers, an apparent attempt to prod people to pay for the more expensive digital service.

Earlier this month, Time Warner dropped KLRU2, an alternative channel for the local public broadcasting affiliate, from Channel 20, making it available only on digital Channel 255. With Channel 20 now broadcasting color bars, Time Warner offers customers four empty channels in its lower "basic" tier, including the spot vacated when the National Geographic Channel was moved to digital – only 18 months ago.

Time Warner says it is simply making room for more high-definition channels. "We're not looking at taking anything away from customers," said Stacy Schmitt, Time Warner Cable's vice president of communications. "We're looking to give customers what they want, which is more HD channels." But consumer advocates believe the strategy is a thinly veiled ploy to push customers toward digital packages, which require the rental of a set-top box. "Consumers should not have to pay more to receive those channels," FCC Chairman Kevin Martin told reporters recently. "Nor should they pay the same as they had previously for less channels if those channels are moved from a basic pricing package to an all-digital tier."

KLRU General Manager Bill Stotesbery declined to speculate on Time Warner's motivation for dumping KLRU2 from Channel 20, beyond expressing his "disappointment." But he is "frustrated" that Time Warner customer service reps are reportedly telling callers that it was, in part, KLRU's decision to move the channel, which is not true. When a Chronicle reporter called Time Warner to question the decision, a customer representative said the move was made "for quality purposes."

As part of the investigation, the cable systems have been ordered to forward all complaints to the FCC.

Meanwhile, Time Warner plans to move the Austin Community College education channel (Channel 19) to its digital tier in January. But the cable system is offering ACC fans a free, stripped-down digital converter box. The box will allow them to watch the ACC channel, but they will still have to pay for the other digital channels.

Barack Obama has been elected leader of the free world, but there's still at least one job apparently beyond the reach of African-Americans – an evening weekday anchor position with an Austin TV news station. None of the local stations features an African-American in a lead role, a longstanding situation that doesn't necessarily fit the racism-is-dead, kumbaya vision inspired by Obama's election.

While black reporters and weekend anchors are common, the dearth of African-American lead news anchors – and minority lead anchors, in general – is a common phenomenon in markets around the country, most often dismissed within the industry as an anomaly, a quirk of the business. Except, at some point, you have to ask why. If there is no color line, why aren't there more blacks in lead anchor roles?

The selection of top anchors – the newsreaders who handle the most-watched evening newscasts – is no accident. They are literally the "faces" of the news operation, heavily promoted and paid the top salaries. Choosing a lead anchor is usually a careful process; highly paid consultants are typically hired to help, and all candidates are vetted for their perceived ability to attract the largest possible audience.

Yet minority lead anchors remain a rarity on Austin's network affiliates. The last African-American lead anchor in Austin, veterans say, was Stephanie Rochon, who teamed with Dick Ellis on KTBC in the mid-Nineties.

Two of the local network affiliates, KXAN and KVUE, recently went searching for new lead anchors – both settled on Caucasian women. (And, sticking to the regimen of TV news, both replaced women with women, preserving the male-female combos that are almost universally used on every news desk. Apparently broadcasters believe viewers would go into convulsions if two women or two men were reading the news.) KVUE General Manager Patti Smith says a black woman was a finalist to replace Christine Haas, but she accepted another job. Smith says it's hard to find qualified black anchors with big- league talent and experience – an oft-repeated position by TV news managers. Under this theory, African-Americans are not taking journalism classes and pursuing TV news careers, apparently uninterested in jobs as highly paid newsreaders. "It would shock you how few minorities apply for these jobs," Smith said.

Bob Butler, a regional director of the National Association of Black Journalists, who has led research projects on diversity in TV news, doesn't discount that few African-Americans are moving up through the system. "It is hard to explain," he said. But he believes there are clearly additional factors at work. So many blacks are assigned the weekend shift, it's sometimes called the "soul patrol," he notes. "Part of it is the good old boy network," Butler said. "People are going to hire who they are comfortable with, and it's who you know."

Recent studies by the National Association of Black Journalists found only 11.4% of executives in network-owned stations are black (only 4% are Hispanic); 40 of the 61 stations surveyed had either one or no managers of color. There is not a single African-American executive producer running a major network news program, NABJ found.

Bad times are ahead for the local TV stations. The Television Bureau of Advertising predicts local TV ad revenue will drop 7% to 11% in 2009. The only thing that saved the 2008 numbers was political ads, analysts say.

New Texas Monthly president and Editor-in-Chief Evan Smith has decided it will take two people to replace him as the magazine's editor. Senior Editor Jake Silverstein is the new editor, while article Editor Brian D. Sweany is the new editor of special projects.

KXAN owner LIN Television and Time War­ner were typically coy about results of their protracted retransmission negotiations, which knocked the station off the cable system for a few weeks. But LIN CEO Vincent Sadusky was less diplomatic in a call with analysts. "The bottom line is we received the compensation that we set out to receive from Time Warner," he said.