Not in My Graveyard: RAMP vs. Covenant Presbyterian 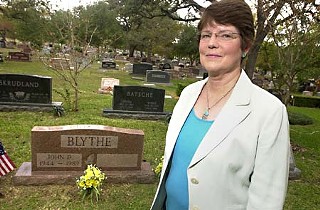 Sharon Blythe stands at the grave site of her husband at Austin Memorial Park Cemetery. (Photo by John Anderson)

In an affluent, urban landscape, land comes at a premium. Sometimes the struggle for space makes for strange foes – like, say, a church and a cemetery.

Sharon Blythe's husband died of cancer in 1989, and she buried him in Austin Memorial Park Cemetery, a tree-dotted swath of grassy acreage just east of MoPac between Hancock and Northland drives. Since then, Blythe has become a self-appointed protector of the municipal cemetery, which she sees as under siege. She leads an organization called Rescue Austin Memorial Park Cemetery, or RAMP. The group has about 700 members – who are kept abreast of cemetery issues via e-mail and postcards – in its database, she says. Most of the members became involved by signing a petition circulated at the cemetery.

Blythe's husband, she says, was American Indian. "In his culture, you don't mess with stuff like this," she says, as she drives slowly along a narrow drive slicing through the graveyard. The "stuff like this" she refers to is what she sees as the desecration of what she calls sacred ground by – of all things – a church.

Covenant Presbyterian Church's property line abuts the cemetery to the north. Just a few feet of asphalt separate church buildings and the cemetery border. Last year, the Aus­tin City Council voted 7-0 to rent the church a 50-by-400-foot strip of vacant, city-owned cemetery property to stage construction of a new building and provide access for construction vehicles. The four-story building, scrunched onto the church's crowded lot, will house the church's youth programs and preschool and provide space for community events.

The church paid the city $55,000 in rent last year for the strip of cemetery. Last month, the city manager's office approved an extension until February, at an additional rent payment of $10,500. A chain-link fence – screened to conceal construction equipment and materials stored there – surrounds the staging area, which rests on an unoccupied end of the cemetery, hundreds of feet from the nearest grave. Church officials say that, no matter what, the church will be off cemetery property by Feb. 9 and that the land will be returned to its former state.

So what's the problem? Blythe has lots of them. First and foremost, she says, it's against state law to use dedicated cemetery land for any other use (a judge disagreed). And the fact that City Council Member Brew­ster McCracken is a member and deacon of the church doesn't sit well with her. He should have recused himself from the 7-0 vote, she says. (McCracken was publicly open about his membership, church officials say, and in no way enriched himself with his vote. The council member was on his honeymoon at press time; however, a city ethics official determined McCracken's vote was not a conflict of interest.) Nevertheless, "He voted to give his church a $200,000 benefit," Blythe says, referring to the church official's admission in court that the congregation could have coughed up that amount for a construction crane, staged construction in its parking lot, and avoided using cemetery land. Her overreaching fear, however, is that the church's encroachment on cemetery land is the latest tactic in an ongoing plot to acquire part of it and build a parking lot. "Once the cemetery is gone, it's gone," Blythe says. "This is a great resource for the city of Austin."

The church – whose 1,800 members hail from Allandale, Tarrytown, Rosedale, and North­west Hills – is bursting at the seams. The site lacks parking spaces, so members are shuttled from area businesses for Sunday services. The church unsuccessfully tried to lease cemetery property for parking space from the city in 1991. And in 2004, the church offered to build a $2 million columbarium in the cemetery, which would have included parking spaces for both the cemetery and the church. The church struck a similar deal with the city in 1997 when it built a joint-use parking lot for the adjacent Northwest Rec­reation Center.

"We try to deal in win-win scenarios," says Covenant administrator Frederick Clement. However, the church, he says, no longer has ambitions to gain cemetery land. "I told the City Council in August of 2007 that we have absolutely no intention of acquiring cemetery land," he says. "I don't know how much more clear I can be."

"I have never heard that they [the church] want to buy a piece of the cemetery," McCracken aide Rossana Barrios confirms. "There's never been any talk about that in this office."

Blythe doesn't buy it. In her efforts to preserve the cemetery, she has waged a lobbying effort involving frequent letters, meetings, and phone calls with city officials and the press. At times, the riff between the church and RAMP has gotten dead ugly. In a confrontation at the church, Clement says that Blythe once commanded him to go to h-e-double-toothpicks – Blythe says she merely informed him of where he was already going – and the church's attorney, Douglas Kilday, says she once prophesied that the entire congregation was destined for eternal damnation. Blythe, who characterizes the church folk as "smooth" and "very aggressive," says Kilday has ridiculed her activism as a "dog-and-pony show."

Blythe has been extraordinarily successful. She managed to kill the 2004 deal and dashed any lingering hope the church may have had to build parking in the cemetery. Nevertheless, she continues the fight. "She won," Clements says. "Mrs. Blythe doesn't know how to take 'yes' for an answer."

Last October, RAMP, Blythe, and three other individuals filed a lawsuit and asked for a temporary injunction to keep the church from using cemetery land to stage its construction. A judge denied the injunction and threw out the lawsuit. In November 2007, she successfully lobbied to have the 90-year-old Austin Memorial Park named a Historic Texas Cemetery by the Texas Historical Commission, adding an additional layer of legal protection. In September of this year, she testified before City Council in an attempt to stop the extension of the rental contract. And she continues to lobby City Hall for an ordinance permanently disallowing alternative uses on municipal cemetery land.

"You can't count on what the city says today will happen tomorrow," Blythe says. "That's why we have to change the code. We need a permanent solution."

Clement says the church is just trying to be a good neighbor. The congregation could have scraped together $200,000 for a crane. Instead, it paid the city $65,500, which is earmarked for cemetery improvements – another of Covenant's "win-win" constructions. The new building will be available to community groups not affiliated with the church. And church members are doing their part to curb urban sprawl, pollution, and traffic congestion by making use of the plot they've got.

"We decided eight years ago not to move out to the burbs," says Elizabeth Christian, a church member, wife of former Mayor Bruce Todd, and president of a PR firm bearing her name. "We are a neighborhood church; 70 to 75 percent of our members live within three miles."

A good neighbor, she believes, but the church refuses to let Blythe and RAMP bring it down. "We don't get down on our knees," Christian says. "We're Presbyterians." 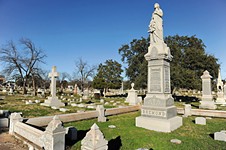 Death Waits for No Plan
Nevertheless ... city drafts a long-range vision for its five cemeteries