Hemp farmers growing nothing but impatient at government roadblocks 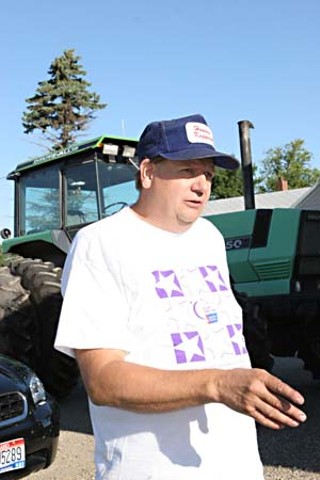 Two North Dakota farmers were back in court Nov. 12, arguing before the 8th U.S. Court of Appeals that the federal government should not be allowed to block their attempts to farm nonnarcotic industrial hemp. Specifically, the farmers argue that because their proposed cultivation is an entirely intrastate proposition, sanctioned by state law, the Constitution's commerce clause precludes the Drug Enforcement Administration's ability to regulate their hemp farming within the state. "The question is whether the mere existence of [the hemp] plant on the farmers' property can affect" marijuana commerce, the farmers' attorney Joe Sandler argued to the court. "The answer to that is no."

North Dakota lawmakers in 1999 passed legislation that would allow state farmers to cultivate industrial hemp – a cousin of the drug marijuana that contains only trace amounts of tetrahydrocannabinol, the drug's main psychoactive ingredient. Hemp was once a major American staple crop (the federal government actually encouraged farmers to grow it during World War II), but by the end of the 1950s (thanks to a variety of factors, including a weakened market), the crop disappeared from the landscape.

Farmers David Monson (also a veteran Republican state representative recently named speaker of the North Dakota House) and Wayne Hauge (a certified seed dealer and certified public accountant) were the first two farmers to apply for, and receive, state licenses to grow the crop. But they have yet to plant any seed because, according to the DEA, hemp is nothing but dope – and dope is illegal. Although the agency has received multiple requests to grow the crop, it has ignored them, critics charge – including an application to plant a research crop made by North Dakota State University in 1998. (The agency finally took action on the NDSU permit late last year, after being roundly criticized by a federal district judge for its perpetual stalling.)

Annoyed by federal narcos, North Dakota lawmakers in 2007 amended their hemp-farming law, removing a requirement that state-licensed farmers first obtain DEA approval before cultivating their crops – the concession to the feds wasn't really necessary, because the nonnarcotic portions of the plant aren't subject to federal regulation, thus their farming wouldn't in any way affect the illegal market for drug marijuana. Still, the DEA argues otherwise, and Monson and Hauge have been reluctant to move forward, afraid that the feds might try to charge them with drug cultivation. According to the DEA, marijuana is a Schedule I drug under the Controlled Substances Act, and therefore possession or cultivation is absolutely prohibited without DEA permission. The farmers agree that marijuana is regulated by the CSA, but they argue that the nonnarcotic portions of the plant – the silk, fiber, sterilized seeds, and oil – are exempted from DEA control. The DEA opposition has created an odd situation: Hemp products are legal to buy, sell, and possess in the U.S., but according to the DEA, the plant cannot be grown here, which means that the raw hemp has to be imported, as do many of the finished consumer products. (Current­ly, most U.S. hemp goods are imported from other countries, including Canada, which reauthorized hemp farming in 1997, and China.)

Monson and Hauge first headed into federal court in Bismarck, N.D., last year, asking for the judge to intervene and tell the DEA to butt out of their plans to grow hemp. That didn't happen; while Judge Daniel Hov­land was not impressed with the DEA's handling of the case, he nonetheless concluded that there is no difference between hemp and the drug marijuana under the CSA. Monson and Hauge say Hovland erred in his conclusion and are asking the 8th Circuit to overrule that conclusion. The court's ruling is expected next year.

Can't get enough "Reefer Madness"? See the archives at austinchronicle.com/reefer.

Reefer Madness: The Great Capitol Hemp Heist
See what happens when you try to separate a hemp lobbyist from his inner woody hurd fibers?