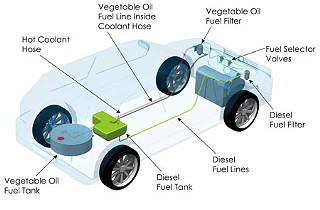 Biodiesel is diesel fuel made from waste and virgin vegetable oils like soy, canola, cottonseed, and sunflower, as well as rendered animal fat – all chemically processed to be usable in unmodified diesel engines.

How is biodiesel made?

Biodiesel is produced through a refinery process called "transesterification," which involves a reaction between the oil (from vegetables or animal fat) and an alcohol used to remove the glycerin, a byproduct used to make products like cosmetics and soap. Removing the glycerine allows unmodified diesel vehicles to burn biodiesel, produced to industry specifications, in order to ensure proper performance.

What's the difference between ethanol and biodiesel?

Ethanol, which is made from fermenting starch crops (typically corn or cellulosic biomass such as grasses or agricultural waste), is intended for use in gasoline engines, while biodiesel is intended for diesel engines. What's referred to as "ethanol" is a blend of 85% ethanol and 15% gasoline called E85, and it can only be used in flex-fuel vehicles designed to handle the fuel. Ethanol contains about 25% less energy than gas and therefore results in diminished fuel economy. Ethanol is frequently used as an additive to help reduce smog-forming emissions; gasoline in many metro areas in Texas contains 10% ethanol. Pure biodiesel contains about 10% less energy than petroleum diesel. However, a Minnesota Department of Agriculture study found that ethanol returned 34% more energy than it took to produce it, while biodiesel returned 220% more – that's compared to gasoline's -19.5% and diesel's -15.7%.

What's the mission of the Sustainable Biodiesel Alliance?

SBA's mission is to establish biodiesel industry standards and best practices that promote localized, low-carbon production and distribution, while addressing claims that biodiesel must compete with food or hasten global warming.

What is "sustainable biodiesel"?

The SBA defines sustainable biodiesel as "biodiesel that is produced in a manner that, on a life-cycle basis, minimizes the generation of pollution, including greenhouse gases; reduces competition for, and use of, natural resources and energy; reduces waste generation; preserves habitat and ecosystems; maintains or improves soils; avoids use of genetically modified organisms; and provides community economic benefit that results in jobs and fair labor conditions."

Can my car or truck use biodiesel or waste vegetable oil?

Most diesel vehicles can run on biodiesel without modification (vehicles built before 1992 may need some fuel lines replaced in order to use pure biodiesel). When switching to biodiesel for the first time, be prepared to replace your fuel filter. Diesel vehicles require a conversion kit to burn veggie oil, but any diesel car or truck can be converted. DieselGreen Fuels sells and installs waste vegetable oil conversion kits for $3,000.

Can I recycle my oil from holiday deep-frying?

Yes. Both DieselGreen and the city of Austin will accept used residential cooking oil and grease to be recycled as biodiesel (the city may use it for other environmental products as well, such as soap). Just put the oil back in its original container (or something with a sealable lid) once it cools, and drop it off at either DieselGreen, 5217 E. Cesar Chavez (247-FUEL) or the Household Hazardous Waste Facility, 2514 Business Center Dr. (974-4343).

How does an engine run on vegetable oil?