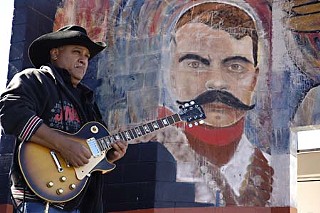 Reaching Out to Austin's Homeless 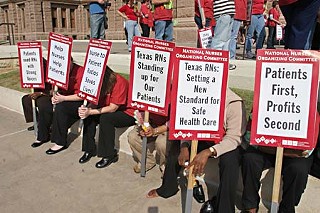 Registered nurses from across the state gathered at the Capitol Nov. 13 to rally for the Texas Hospital Patient Protection Act, which would shine a light on unsafe practices in hospitals. Such legislation would, among other things, set a minimum RN-to-patient ratio, allow provisions for nurses to serve as patient advocates, and establish whistle-blower protections for RNs. (Photo by Jana Birchum)

Adults and Their Toys

Willie is free: On Oct. 29, the Texas Attorney General's Office reported to federal District Judge Lee Yeakel that the state would not appeal to the U.S. Supreme Court a ruling that overturned Texas' ban on the sale of "obscene devices." The state lost its bid to uphold a retail ban on anatomically correct sex toys "designed or marketed as useful primarily for the stimulation of human genital organs," on appeal to the 5th U.S. Circuit Court of Appeals. The state was sued by Austin-based Reliable Con­sultants Inc. (which owns LeRouge Boutique and the seven-store chain Dreamers), whose owner, Doug Richards, and general manager, son Cloud, argued that the moralistic Texas toy ban presented an unconstitutional infringement on the private sex lives of adults. A two-judge panel of the 5th Circuit agreed, ruling that the ban ran afoul of the 14th Amendment's guaranteed right to "engage in private intimate conduct in the home without government intrusion." (See "Dildos No Longer a Hard Sell," April 25.) With Texas calling uncle on the case, only Kan­sas and Alabama still have laws on the books banning the sale of sexual devices. – Jordan Smith 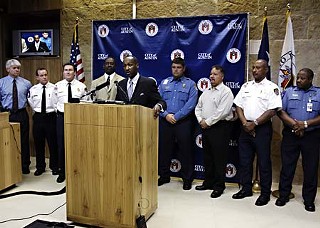 City and Austin Fire Department officials line up behind City Manager Marc Ott in a show of support for his recommendation of Rhoda Mae Kerr as Austin's first woman fire chief. Kerr, the fire chief of Little Rock, Ark., is expected to appear before City Council today (Thursday) to receive the council's formal blessing. Kerr will begin her new duties Feb. 2. (Photo by Sandy Carson)

Mike Krusee is in the clear now that a Driving While Intoxicated charge against him has been dropped. On Nov. 17, in County Court at Law No. 1, visiting Judge Chuck Miller accepted a written statement from Williamson County Attorney Jana Duty that, while the arresting officer had grounds to make the stop and arrest, a jury would be unlikely to convict. The retired state rep was arrested on April 30 after failing a field sobriety test, in the judgment of the arresting officer. After a request from the Depart­ment of Public Safety, Attorney General Greg Abbott agreed to withhold the dash-cam video of his arrest. Released after the dismissal, the video appears inconclusive; Krusee was not obviously intoxicated. "From the state's perspective, they didn't have sufficient evidence for a prosecution," said Krusee's attorney Jason Nassour. "Quite frankly, the video speaks for itself." – Richard Whittaker 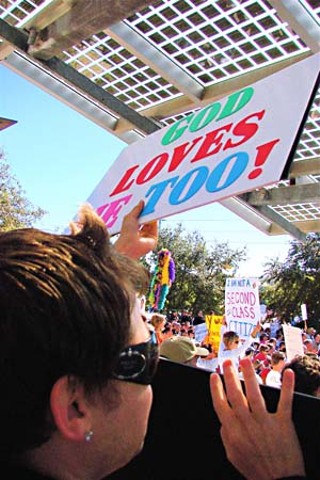 Some 2,000 Austin residents joined tens of thousands of protesters across the nation Nov. 15 to speak out against California's narrow approval of Proposition 8, banning marriages between same-sex couples. (Photo by Kate X Messer)

Perry Takes a Back Seat

Gov. Rick Perry has stepped down as chair of the Republican Governors Association. At the annual conference in Miami on Nov. 14, Perry moved to finance chairman, while ultraconservative Gov. Mark Sanford of South Carolina was elected the new chair. Perry's last public appearance in the job was an awkward RGA joint press conference at which the media was interested only in hearing the GOP's failed vice presidential candidate, Alaska's Sarah Palin. When Perry took the RGA's top seat in December 2007, it was widely seen as a move to improve his national profile for a possible vice presidential run. – R.W.

A Schleicher Co. grand jury handed down eight new indictments last week against four members of the Mormon break­away sect the Fundamentalist Church of Jesus Christ of Latter-day Saints – including one new felony charge against imprisoned FLDS prophet Warren Jeffs. Jeffs, convicted on a charge of rape-as-accomplice in Utah and in prison awaiting trial on similar charges in Arizona, was newly indicted for sexual assault; he's already been charged with bigamy and aggravated sexual assault of a child by grand jurors in West Texas' Schleicher Co., where the FLDS built a compound and its first-ever temple, just outside Eldor­ado. Three other men – not yet named – were indicted on bigamy charges, and one was charged with "conducting an unlawful marriage ceremony involving a minor," Texas Attorney General Greg Abbott said in a press statement. To date, 12 FLDS members have been indicted on criminal charges as "part of the ongoing and continuing criminal investigation," Abbott said. – J.S.

Think the elections are over? Silly you. Gov. Rick Perry has called a special election on Dec. 16 in Harris Co.'s Senate District 17. Democrat Chris Bell and Republican Joan Huff­man survived a six-way race on Nov. 4 to finish retired Sen. Kyle Janek's unexpired term. On Elec­tion Day, former U.S. Rep. Bell finished first, with 38.4% of the vote to former District Judge Huffman's 26.1%; since a majority was required to win, they'll go to a run-off. In the House, recounts are expected in two races. Republican Brian Walker has asked for a retally of the votes in Jacksonville's House District 11 after Democratic incumbent Rep. Chuck Hop­son kept his seat by 102 votes. It's even closer in Irving's HD 105, where incumbent Republican Linda Harper-Brown held off Democrat Bob Romano by only 20 votes (Romano announced his intention to request a recount last week but had to wait for the Dallas Co. clerk to certify the Nov. 4 results). If the current votes stand, the House is split 76-74 with a Republican majority, but if either seat flips, this could go 75-75 or 77-73. – R.W.

The Association of Alternative Newsweeklies has launched a new Shop Locally Owned project through more than 70 of its member newspapers across the country. The Austin Unchained idea was picked up by the American Independent Business Alliance (AMIBA) and taken to other cities; this year, AMIBA co-developed a new holiday-season project to promote the message with AAN, a trade organization of 130 alternative newspapers (including The Austin Chronicle). "Conscious shopping, like voting, is a powerful way to make change," noted AMIBA spokeswoman Erin Kilmer Neel. Many alt-weeklies are challenging readers to make official pledges to spend at least $100 at locally owned stores in the next month. (If the combined 17.5 million readers of indie newspapers followed through, they could shift more than $2.9 billion to indie stores and thus pump up their local economies.) The Chronicle, in true indie fashion, never quite got with the official AAN program but instead has spun off its own Shop Local campaign. – Katherine Gregor 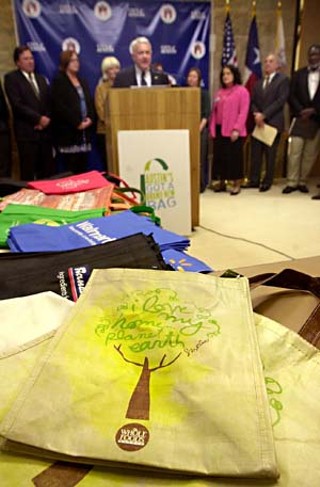 Austinites have begun to get the message about disposable plastic bags being bad for the environment. "The hardest part of reusable bags is remembering to take them into the store with you," said Council Member Lee Leffingwell on Nov. 17 as he and colleague Mike Martinez presented the city's interim study on its Reduce, Reuse & Recycle initiative. Both encouraged more businesses to join the program's partner firms (including H-E-B, Randalls, Target, Walgreens, and Wal-Mart) so the city can reach its July 2009 target of a 50% reduction in bags headed to landfills. The report's quick stats: 40% fewer plastic bags were given away at participating stores in the first half of 2008 compared to the same period in 2006; 443,227 reusable bags were supplied; the weight of bags recycled went up 20%. Martinez said these results validate council's decision not to pass a complete bag ban, adding, "You don't need to use a stick when you can use a carrot." Rick Cofer of the Ban the Bags Coalition released a statement applauding the city's progress but added, "I remain convinced that aggressive measures will be necessary to reduce our communitywide plastic shopping bag waste to zero." – R.W. 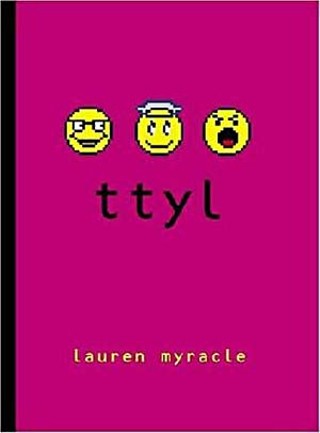 A young-adult book written entirely in text messages has some Round Rock parents saying, "WTF?" The Round Rock Independent School District school board is expected to vote tonight (Thurs­day) on whether or not to ban TTYL ("talk to you later" in text speak) by Lauren Myracle, a book considered controversial for its frank depictions of sex and gratuitous use of the word "stiffie." Instead, Superintendent Jesus Chavez decided to restrict the book to high schools. In October, a group of parents had petitioned to ban the book, calling it "obviously vulgar and offensive to the average person." Two school/parent committees voted to keep it on the shelves, but parent Sherry Jennings went over their heads to the board. This isn't the first time TTYL has come under fire. According to the American Library Association, TTYL was the seventh most-challenged book in 2007, and Myracle – as unpopular with parents as she is popular with tweens – was the ninth most-banned author. – Justin Ward