There's the 15-member task force, which makes its recommendations to council this week, and then there's you – what are your plans for saving Austin music?

"At the risk of sounding dramatic, this is a landmark week in Austin music," declared Live Music Task Force Chair Paul Oveisi, who also owns Momo's on Sixth Street. "We have an opportunity to step up as a community and build a foundation of a live music infrastructure that could catapult Aus­tin to be a cutting-edge music city."

After nine long months of work by the 15-member volunteer task force, created by City Council in January, its recommendations, reflecting substantial community input, will be presented to council at 2pm on Thursday, Nov. 20. The next hurdle: turning all those good ideas into new city policies, programs, and community initiatives that actually work to support the music scene and related sectors of the local economy.

The new nonprofit Save Austin Music has dubbed this "the Week That Will Change Austin Music Forever." SAM is partnering with the Austin Music Foundation for a march to City Hall on Thursday to demonstrate community support for the live music scene. Ralliers will gather at 1pm at Antone's (213 W. Fifth; free parking at City Hall). Notes SaveAustinMusic.com: "The LMTF will tell City Council how the City can help support our industry and how they can help us make a living in the music business in Austin. But these recommendations will have little effect without public support."

Bobby Garza, a task-force member, musician, and aide to Council Member Mike Mar­tinez, noted this week, "It's going to be up to folks who care about this stuff to lobby council, push forward the recommendations they think are good ideas, and make sure action gets taken." The most emphatic push will need to come from council resolution sponsors Martinez, Will Wynn, Sheryl Cole, and their colleagues. Here in the live music capital of the world, no elected official would dare be "against" live music. Certainly it bodes well that Garza and mayoral aide Rich Bailey have been closely involved in making the task force a success. But other recent citizen recommendations – memorably those of the Affordable Housing Incentives Task Force – have languished without council adoption or much staff support.

Look for council to take its first action at its Dec. 11 or 18 sessions, likely directing city staff to pursue one or more recommendations. The central one: "Establish a central Music Department (MD) within the City of Austin governance structure." If it's not officially someone's job to implement the 15 pages of bright ideas, they won't get far. Realistically, city funding will have to wait on the 2009-2010 city budget; given shrinking local sales-tax revenues, even that now looks dubious. So as not to lose momentum, the task force recommends tasking an existing city staffer (ideally reassigned full-time), or a team, with the responsibilities outlined in the report.

Many of the suggested improvements would cost the city little other than staff time. (For a detailed analysis, see "Music Deportment," Music, and "Can the Bands Play On?" July 18.) Big-ticket items, such as providing central affordable housing for musicians, would likely need private-sector participation or other funding. And members will need cost-benefit estimates from the budget office, headed by Chief Financial Officer Les­lie Browder, and/or the Economic Growth and Redevelopment Services Office, overseen by Assistant City Manager Sue Edwards.

A detailed economic development analysis would define the potential return on the city's investment. The music industry was credited by a 2004 city report with generating nearly $1 billion in local economic activity. An effective Music Department potentially could pay for itself by growing the local music industry and thereby yielding more sales- and property-tax revenues. The task force recommends an active three-pronged strategy: 1) recruit needed industry elements, such as record labels, distributors, booking agents, and talent management; 2) attract complementary industries, such as digital and film; and 3) incubate and foster growth of existing industry elements already in Austin. To make fast tracks, the city's Economic Growth wing potentially could partner on this effort with Opportunity Aus­tin, the economic growth arm of the Austin Chamber of Commerce.

Urged Oveisi: "I can't emphasize the power of proving that the community is behind this report. Numbers speak volumes to our elected officials." Observing that the task force has already required "many months of public forums, late-night work sessions, surveys, meetings, consultations with people all over this planet," he said: "I ask more. Partici­pate. Pay attention. Be involved."

The Live Music Task Force recommendations – including recent changes regarding sound enforcement and control – are posted online at www.cityofaustin.org/council/livemusictaskforce.htm. 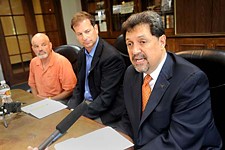