In the public school testing frenzy, responsibility and consequences flow only downward

As the semester winds down and Austin ISD calculates its annual tax bump, it's time to get worried again about troubled public schools. Under the gun this year are Pearce Middle School and Reagan High, both on the northeast side and both facing the threat of state closure next year if the students cannot achieve sufficient improvement on standardized tests, the dreaded Texas Assessment of Knowledge and Skills. With the Lege session looming, Reagan students and supporters are sponsoring a Capitol rally for the school this Saturday afternoon. Rep. Dawnna Dukes, a Reagan alum (Rep. Donna Howard is another) has promised to sponsor legislation to modify or put an end to school closure as a consequence of "accountability." The votes to do that are likely a long shot, but in that politicized context, it's worth recalling that the closure policy partly originates in federal law, aka "No Child Left Behind," an Orwellian euphemism for a practice that sends administrators, teachers, and especially students and their families scrambling for alternatives when the neighborhood school is shuttered.

The district and both schools have made administrative changes and program adjustments to address the test scores, in fact part of a complex matrix that affects all student subgroups (i.e., racial, economic, disabled) and, by all accounts, emphasizes and rewards "teaching to the test." Beyond that, the project becomes motivating the larger school community, especially parents and neighbors, to get directly involved in the success of the schools and their students – such an effort worked remarkably well at Webb Middle School, which fended off potential closure last year.

A couple of weeks ago, Dukes and the district sponsored a Pearce community forum aimed at building morale and getting more community buy-in to the school's success. The event was well-attended – principal James Troutman says he had a rough count of 350 – and students, teachers, and parents chimed in that they believe in Pearce, echoing the year's slogan, "Success is the only option." Quite a few attendees listened on headphones to a simultaneous Spanish translation; among the school's many challenges is a significant number of English language learners.

Troutman informed the parents that while student test scores have measurably risen this year, they do not yet meet state standards in all categories. Later he told me that the central challenge for the entire school community is "just staying focused" on the goal of raising the test scores while still effectively teaching the broader school curriculum. The forum event is part of the ongoing school/neighborhood effort; this week, Troutman noted, parents are invited to the school for a celebratory Thanksgiving lunch.

Not surprisingly, the external pressure has generated some cracks in the harmonious facade. In October, Troutman sent a memo reminding faculty of grading schedules (and a new computer system that will allow parents Web access to their children's grades), using what he now calls "tongue in cheek" phrases: "BIG BROTHER is ALIVE and WELL!!!" and the "Gradespeed Gestapo is watching!!!" Some teachers didn't take kindly to the memo, and after AISD got wind of it, Troutman sent an apology. "It wasn't in the best of taste," he told me, but insisted he did not mean to intimidate or offend anyone.

More substantively, some teachers (fearing retaliation) have privately complained that Troutman is an ineffective administrator and has poorly managed school discipline. He says that in fact disciplinary referrals at Pearce have dropped dramatically over the past year, as have assignments of students to home suspension or alternative education. He added that Education Austin, the teacher and staff union, will soon be providing workshops in "positive behavior support" at the school.

Teachers are understandably worried about their own futures as well as that of the school. At the Pearce forum, Education Aus­tin's Louis Malfaro struck a discordant note when he charged that the former Johnston High teachers – 75% of whom had to be "reassigned" under TEA's punitive closure rules – were essentially cut loose without support by AISD, and many could not find other positions and left the profession. Dis­trict spokesman Andy Welch said that while some teachers did indeed find positions in other district schools, the awkward timing of the Johnston closure diminished reassignment options. "I think we did the absolute best and fairest that we could," he said.

Malfaro called for the district to change a policy that effectively punishes teachers who accept the risk of working in an already disadvantaged school. "Students will suffer," he said in a press release, "as quality teachers who want to work with high-needs students avoid assignments that could lead to losing their employment."

All these potential reverberations are certainly in the air, not to mention the larger cloud of empowering the testing obsessives, bureaucrats, and their commercial allies beyond all reason ("students are being tested to death," a Pearce teacher told me). Dukes (also a Pearce alum) vowed to the forum, "This is my school, and I won't let anybody at the Capitol forget it," raising the question of just how much weight local authority might carry at the TEA. Dukes exhorted the crowd, "We must consider Pearce as a mission for each and every one of us." Said District 1 trustee (and Pearce alum) Cheryl Bradley: "We are not supporting children by closing a school. ... We have to bring the resources, embrace the children, and do what needs to be done."

Judging from the enthusiastic response from the crowd on this night, the core members of the Pearce community have gotten the message that the future of the school is in their hands – pending always the tyranny of the numbers and the TEA. Dukes noted the experience of Webb, calling it "a success story that is unusual, but not impossible to emulate," although those present remained painfully conscious as well of the shadow of Johnston, now Eastside Memorial High.

It remains to be seen whether Pearce and Reagan, the district, and the broader Austin community can successfully follow the Webb example and thereby turn a corner for East Austin schools. 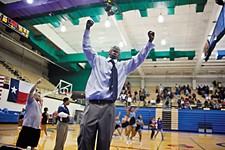 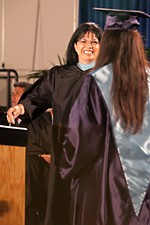