Staking Out the Brack Tract

This conceptual westward view of Lake Austin Boulevard gives the Brackenridge Tract an urban, mixed-use appearance in place of its current look: the Lions Municipal Golf Course on the right and student housing and a field laboratory on the left amid plenty of green space. (Courtesy of Cooper, Robertson, & PArtners)

A week of presentations and workshops has moved the planning process for redeveloping the UT-owned Brackenridge Tract to its halfway point. On Nov. 3, representatives from Cooper, Robertson & Partners and other stakeholders conducted an opening presentation to a packed room at Lower Colorado River Authority Headquarters. The exhaustive PowerPoint examined the history of the tract, its relation to Down­town Austin's urban development, and a host of other topics ranging from UT projects to environmental sensitivity. On Nov. 5, CRP hosted two public workshop sessions in which facilitators assisted teams working on five different scenarios. Each scenario had two different teams, resulting in 10 different plans. Finally, the Nov. 7 presentation showcased what the teams had delivered and featured a review of a task force's recommendations.

The 346-acre tract of University of Texas land sits alongside Lady Bird Lake on Austin's west side, a gift to UT by George Washington Brackenridge in 1910. In October 2007, the UT Board of Regents received a report from its appointed Brackenridge Tract Task Force and subsequently hired CRP to devise two conceptual master plans for the land. Several notable developments sit on the tract, including the city-leased Lions Municipal Golf Course ("Muny" for short), the UT Bracken­ridge Field Laboratory, student housing, and the West Austin Youth Association.

Reactions were mixed among those who attended the week's workshops. Mary Arnold, a longtime Save Muny advocate, complained that folks didn't have time to study the design principles and expressed concern that the comments made during the workshops could be taken out of context and used "in a way we didn't want it to." Tomas Pantin, a Deep Eddy resident who participated in the workshops, felt that the CRP facilitator leading his group took too much control. "The facilitator was basically drawing whatever she wanted to do," he said. Pantin worried that the week's worth of work amounted to a "PR move, and out of all these tables, you can pull certain things and say the neighborhood wants them." When asked to respond, Paul Milana of CRP told us, "The only way we can consider the public [and what it wants] is to ask them." West Austin resident Jimmy Robertson had some critical questions about the value of Muny, but after the session, praised CRP, saying the consultants had "a lot of sincerity" and placed the onus for action on the regents.

Milana also brought Friday's audience of 50 up to speed on the 2007 report recommendations of the task force. He reiterated that CRP considers these "perhaps the most important" pieces of the planning puzzle. First, he said, the report implied that the CRP recommendations take into account the long-term nature of the project. The report's second recommendation is that the Brackenridge Development Agreement, which allows for leases on the tract, be allowed to expire in 2019. Milana noted that the recommendations also stipulated that the field laboratory research center be included in the planning process, indicating that it could potentially be relocated. It also recommended better utilization of the graduate-student housing located on the site. Milana told the crowd, "I can't emphasize the long-term nature of the recommendations," and reminded the audience that the report called for terminating the lease agreement with the city for the Muny golf course. The same would apply to WAYA. Milana said that the plan should include evaluating any trail extensions and noted small groups of stakeholders had "lots of discussions on how best to approach Town Lake Trail, if at all."

The five planning scenarios the citizen groups worked on ranged from total redevelopment to total preservation. Milana said CRP then looked for themes and tried to measure them against the draft design principles crafted after previous citizen sessions this summer.

Some of the emerging themes called for compact, mixed-use developments – the sort of projects that have dotted the expanding city already, though some neighborhood residents cautioned they didn't want another Triangle development or Domain project in their neighborhood. Milana said that many groups wanted connectivity with Lady Bird Lake, though the relative distance of any trails between the lakefront and Lake Austin Boulevard varied. View corridors to the lake were another theme that cropped up, along with the idea of walkable neighborhood grids. Improved street intersections at crucial junctures, such as Exposition and Lake Austin Boulevard, were depicted in several of the scenarios, with traffic circles and sidewalks prominent among these. Another proposal envisioned turning the boulevard into a scenic roadway with vegetation in the medians, similar to the revamped Barton Springs Road.

Milana pointed out an example that depicted development creating open spaces in order to fund them – highlighting the economic feasibility of the design concepts. He also chastised one group's proposal to turn much of the land north of Lake Austin Boulevard into a central park of sorts, with a nine-hole golf course in the middle. He said this proposal didn't take into account how such green space would be funded.

During a brief Q&A, Milana said there "isn't a plan in place" to deal with the recent City Council resolution offering to buy or swap the golf-course land, though he indicated that there may be room for negotiations after the planning process. From here, the CRP planning team will return to its home office in New York and compile the themes. There will be a follow-up with the public this spring, and by June, the two conceptual plans will be unveiled.

Though it's taken a back seat to the battle over Muny, traffic is a major issue affecting the development of the Brack Tract. Mike Weaver of Prime Strategies Inc. has been pulled into the planning team, and he and his firm are well-known to any government entity dealing with Central Texas infrastructure. Weaver spoke about the poor east-west connections between West Austin and Downtown, a fact not lost on the nearly 25,000 drivers who pass through the Brackenridge land daily. New York consulting firm Cooper, Robertson & Partners conducted a survey in which 63% of respondents said their primary interaction with the tract was driving through it. With so much existing traffic, several citizens expressed concern that UT would not be willing to pay for needed infrastructure should there be an increased residential presence on the tract. Weaver said his firm would draw up a list of infrastructure costs "on-site and off-site, which would allow developments that are proposed to be done." How the state, university, and city propose to sort out the traffic puzzle will likely be a less glamorous, but very important, aspect to the development. 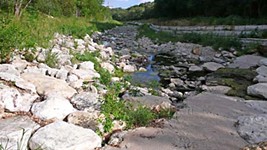