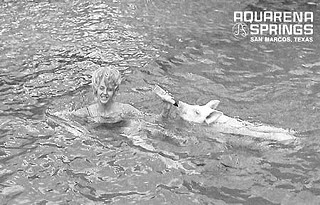 Texas State University – or "Southwest Texas" to most alumni who fondly remember the San Marcos campus – plans to tear down the last vestiges of Aquarena Springs, a wondrous resort hotel and theme park in its preinterstate heyday, a well-known mainstay of the San Marcos economy for decades, and the home of the infamous and lovable Ralph the Swimming Pig. The university plans to remove all of that development and return the springs to a much more natural state over the next few years.

If you attended Southwest Texas in the 1960s, Seventies, or Eighties, you knew Aquarena Springs, either as a summer job or as the main tourist attraction in a town that would inevitably wane in the shadows of Austin's University of Texas campus. Helen Ginger, who attended Southwest Texas for her degree in English and speech communications in the early 1970s, swam as an aqua maid in the resort's synchronized swim shows for three years. The Lockhart native was never sick the entire time, she says, even though she swam year-round (Aquarena advertised that it was open "every day but Christmas!"). "I always attributed it to being in and out of the cold water – and the warming rooms," said Ginger, who still remembers those hours in the submarine tank in her famous mermaid costume. "The mermaid tails weren't easy to swim in. The material was quite buoyant. If you didn't keep moving, your feet would rise, and you'd find yourself floating to the surface, feet first."

Aquarena Springs, at the headwaters of the San Marcos River, belongs to an era where a day trip was a family treat, Dairy Queens were plentiful, and the best family entertainment was the drive-in movie on Saturday night. The story never changed much at Aquarena. There was always the wonder of the glass-bottomed boats and entertainment from Ralph the Swimming Pig – typically one young piglet, with two or three cousins behind the scenes – accompanied by synchronized swimmers and underwater picnics. Those shows always included Glurpo, the head witch doctor, and Bublio, his somewhat bumbling assistant.

Steven James Rainey, now a professor at McNeese State University in Louisiana, played both Glurpo and Bublio in the late 1970s. He remembers his witch doctor "wig" as a bathing cap with black yarn stitched to it. It was fun during the summer months but hell during the winter, he recalls, when the crowds were much smaller at the Springs. Unlike Ginger, Rainey's health didn't take to the year-round swimming. "I remember having a cough all winter because I had to perform shows in freezing rain when it was in the lower 30s, even if there were only two people in the audience," he said. "I used to go to classes and Phi Psi parties with a bottle of cough medicine in my pocket to suppress the constant coughing."

Eventually, the corny costumes at the family-run resort were replaced by scuba gear, and the paving of the interstate passed Aquarena Springs by. When Texas State bought the resort in 1994, Aquarena was well past its heyday but still trying to relive the popularity of its youth. Ronald Coley, director of the Aquarena Center, says that the university's initial plan was to use the theme park to underwrite academic research. For a while, enough land was optioned to build an anticipated Central Texas theme park. Eventually, though, that new theme park – Sea World – landed in San Antonio, simply adding glitzier competition to the mix.

The university pressed on with its plans. Texas State bought new costumes and revived the parrot exhibit, Coley said. It built an aquarium and created a traveling exhibit of the Central Texas fossil record. Intentions were to add a bit more of an educational spin to the park, possibly nudging it in a new direction – but it never quite clicked. Coley described the situation as a bit like inheriting your wealthy old aunt's Victorian house, knowing what a great gift it was but not quite what to do with it – or how to pay the property taxes.

Attendance was dropping at an alarming rate, down from 350,000 visitors a year in 1984 to 150,000 only a decade later. Today, as just a nature center, Aquarena draws about 100,000 visitors a year. "There just wasn't enough there to turn the downward spiral around," Coley said. "By the time we stepped in, it was the beginning of the explosive growth of Schlitterbahn. So you had Sea World and Fiesta Texas and Schlitterbahn. ... With all that competition, we knew that Aquarena Springs would do nothing but decline."

Coley remembers Ralph's final performance on a gray, overcast day in February of 1996. Coley sat in the audience at the submarine theatre with the daughter and granddaughter of the family that built the Aquarena resort, beginning with the hotel in 1929 and the theme park additions in the 1950s. It was cold and a bit wet that day, Coley recalls, and only five people sat in the audience. "As we sat there, I wondered ... if we had had a year to tell people this was going to be Ralph's final season, couldn't we have packed the park?" Coley said. "We just weren't prepared for something like this. This was his final performance, and no one knew it. We could have had all sorts of publicity – like the Rolling Stones' final tour – but we just didn't know at the time."

Now, the university plans to return Aqua­rena Springs to its original, pristine condition. It remains, according to fossil records, one of the oldest continually inhabited locations on the continent, as well as the second-largest artesian springs in the Western United States. Andrew Sansom – director of the River Systems Institute, which is headquartered in the Aquarena Springs hotel – said that pulling down the theme park will be a multiphase project, to be completed by the Army Corps of Engineers. The university regents begin negotiations with the corps this month.

Only a few remnants of Aquarena Springs will remain once the project is complete. 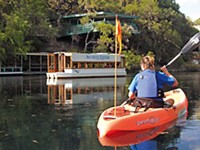