Tweet
print
write a letter
Of all the Texas Democrats excited about this year's election, none was more worked up than those of Harris Co. After years of being dominated by Republicans, Harris – much as Dallas Co. did in 2006 – finally turned blue. As The Texas Observer recently noted, it's a big comeback from 1994, when Republicans swept every county administrative and judicial office, and 2003, when the Tom DeLay redistricting plan knocked out several Dem congressmen. With Obama taking more than 50% at the top of the ballot, Dems were the top vote-getters in 72 of 106 races in Harris, and of straight-party voters, 53% punched Demo­crat. The hardest-fought victories were the district court races, where Dems took 21 of 25 seats, with no Dem doing better than 52% and no Republican doing better than 51% – the narrowest being the 165th Dis­trict, where Democrat Josefina Muniz Rendon edged Republican Elizabeth Ray with 50.01% of the vote, winning by 135 ballots out of more than 1.1 million cast. 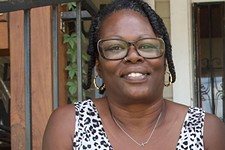