After election euphoria, grim reality sets in for GLBT community

Tweet
print
write a letter
While the rest of the country surfed the wild sea change courtesy of last week's historic victories of Barack Obama and the Democratic Party, the nation's GLBT community felt the familiar chill of being cast adrift. The passage of anti-gay marriage propositions – Proposition 8 in California, Prop. 102 in Arizona, and Prop. 2 in Florida – and an anti-gay-adoption measure in Arkansas harshed many a gay mellow on election night.

The election was an especially hard blow to California, which came much closer to defeating the proposition in this election than it did in 2000 for the similarly anti-gay Proposition 22, which won by 61.4% to 38.6%. Prop. 22, of course, was invalidated by a May 2008 court decision, which found that the measure violated the state constitution, leading to the "legalization" of same-sex marriage in California. According to a UCLA study, more than 18,000 same-sex couples have wed since the landmark decision, although the legal status of the marriages is now uncertain.

Both sides of the issue poured more than $35 million into their campaigns, evangelizing far beyond the state's borders for financial support. The proponents made great use of the social networking potential of church communities – much of their victory is credited to last-minute Mormon and Catholic collaborations – and also tapped into the religious segment of the wide African-American voter turnout for Obama.

Closer to home, Texans lent support to both campaigns, with the yes on Prop. 8 side garnering 20 contributions from Austin donors who kicked in a combined $137,290. The no on Prop. 8 side attracted 127 Austin contributions for a total of $142,895. Local donors included Dell marketing manager Spencer Wheelwright, who made two contributions totaling $25,200 in support of Prop. 8, and the political action committee of Apple Inc.'s Austin office, which contributed $100,000 to the anti-Prop. 8 campaign. Also of note, Austin resident and L.A. Dodgers player Jeff Kent gave $15,000 to the pro-Prop. 8 campaign. The San Francisco Chronicle has posted a searchable database of contributors, culled from data available through the California Secre­tary of State's Office, at www.sfgate.com/webdb/prop8.

The impact of these measures has been felt since Election Day: Gay marriage licenses are no longer an option, lawsuits have been brought, and a steady stream of protest has been growing across the country. Initially, the NoOnProp8.com website listed all of these gatherings, but its calendar ceased listing events after Nov. 9. Since then, an independent online social networking effort called Join the Impact has gone viral (logging more than 1 million hits since its launch last Friday) and spawned grassroots movements all over the country. On Satur­day, Nov. 15, the Central Texas component of its first call for national protest will be held at 12:30pm at Austin City Hall, coinciding with actions at city halls around the country.

Individuals "Cohabiting Outside of a Valid Marriage May Not Adopt or be a Foster Parent" of a minor under 18.

Source: Election offices of each state

Reviews You Can Use
Find the gray area in 'The New Black,' or explore sweeping panoramas and unbridgeable divides in 'The Most Fun I've Ever Had With My Pants On' 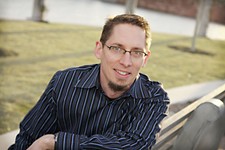