Texas Dems see a bright light at the end of a long, dark tunnel 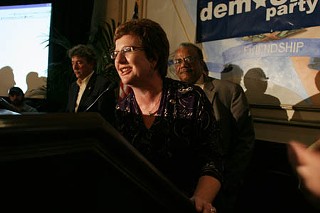 Austin state Rep. Valinda Bolton secured a decisive victory for Democrats in one of the most closely watched House races in the state. (Photo by Jana Birchum)

A quick reminder: On Nov. 4, the Texas Democratic Party didn't take the state Legislature. The Republicans still hold both chambers, the House narrowly, 76-74, and a much stronger Senate majority of 18-12 (with Senate District 17 going to a run-off). But heading into next year's legislative session, House Democrats feel like they've got some power again. "Last session, we were running the policy debate with 69 seats," said House Democratic Caucus Chair Jim Dunnam. "With 74, we're going to get a lot more done."

Out of seven major targeted seats, Dems took four, plus the bonus pickups of Kristi Thibaut in Harris Co. and Robert Miklos in Dallas Co. While three GOP gains reduced the net Dem increase to three seats, Demo­crats have noticed the number of moderate Republicans and speaker hopefuls such as Rep. Jim Keffer, R-Eastland, calling for a bipartisan approach as the tide turns. With 68 Democrats already agreeing to vote against Speaker Tom Craddick, Dunnam said he believes there are 40 Republicans willing to reach readily across the aisle. He has a simple explanation for the shift: "Leadership. We cut a 26-seat margin to none, and it was the heavy hand of Craddick that did it."

According to Texas Democratic Party communications director Hector Nieto, the election results are a clear warning to Repub­lic­ans: Work from the center again, or see three straight elections with Democrat gains become four in 2010. "If Republicans want to dig in, I'm fine with that, and I'll hit them at every opportunity," said Nieto. "It's clear that Texans don't want extreme left-wing or extreme right-wing leadership."

The question now is whether an increasingly urban and suburban Texas will favor Democrats long-term. Take HD 17, Democrat Robby Cook's vacated Eagle Lake seat which switched to Republican Tim Klein­schmidt, who saw off Democrat Donnie Dippel comfortably, 54%-43% (Libertarian Alan W. Dues­ter­hoft picked up the remaining 3%) – but there's a snag. Last presidential election, every county in HD 17 went Republican. In 2004, Bush-Cheney took Bastrop County 57%-42%. In 2008, it went for McCain-Palin but by a narrower margin (53%-45%), while the district's other counties (Burleson, Colo­rado, Fayette, Lee, and part of Brazos) broke by about two-to-one for McCain. "I'm not surprised," said Travis County Coordinated Campaign Communications Director Matt Glazer. The difference, he explained, is that Bastrop is increasingly in the commuter belt for Austin. "Bastrop is trending towards being Democrat because of a very large African-American community," he added.

Democrats are also analyzing Travis Coun­ty, especially the hard-fought HD 47. Freshman Rep. Valinda Bolton held her seat and rose from 50% in 2006's three-way race to 51% in a straight fight with GOP candidate Donna Keel in 2008. On election night, initial concerns faded as her campaign staff realized that, even after being painted as ultraliberal (as one campaign pro described it, an east­ern Travis-style Democrat running in western Travis), she had still held arguably the county's most conservative district. "You have to remember that Valinda's seat is a GOP-drawn seat," Glazer said.

So now Democrats build their 81st session agenda. Nov. 10 was the opening date to prefile bills and so, with an eye toward the 2011 redistricting and avoiding the catastrophic gerrymandering of 2001, Rep. Mark Strama, D-Austin, filed House Joint Reso­lu­tion 19, proposing a truly independent Texas Redistricting Commission. And while Dun­nam warns that "you can't judge a session from prefiling," Democrats are following up on their election pledge of tackling "pocketbook issues," including one normally seen as a Republican strong suit: home ownership. Multiple bills relating to insurance regulation and rates – a major issue post-Hurricane Ike – have been filed, while there's also a strong chorus for a house "lemon law." Bolton has said she will work on water supply legislation, an increasingly urgent issue as Texas' population swells (see "Drying on the Vine," p.30). "It's the rock star that slogs it out in the trenches for 20 years and suddenly becomes a celebrity," she said.

Dunnam is optimistic that party unity will sustain this kind of legislation and was encouraged by the House Democratic caucus meeting on Nov. 5. "We entered the room united and left even more united," he said. Sixty-eight of the 74 reps attended: Dunnam has since spoken to three of the absentees and is waiting for the others to return his calls. He thoroughly rejects the idea that former Craddick Ds will be exiles in their own party. "Check with Patrick Rose or Eddie Lucio and Norma Chavez. They've never been threatened; they've never been subject to retaliation," he said. "We haven't fought Craddick hard just so we can turn around and do the same things that he did."

Reviews You Can Use
Find the gray area in 'The New Black,' or explore sweeping panoramas and unbridgeable divides in 'The Most Fun I've Ever Had With My Pants On'