Drying on the Vine

Organic farms in the Austin area are wrapping up a devastating summer season. Some are facing potential extinction, while others have simply shut down for the year. Droughts are nothing new in dryland Texas, but in recent years, the inevitable stress they place on water systems such as creeks and aquifers seems to have intensified with increased usage and poor resource management. Laura Marbury, senior water analyst with the Environmental Defense Fund, says the farms are essentially the canary in the coal mine for the rest of the Hill Country population. "The scale is small," she said, "but it's a sign of the times."

Trying to understand the water issues that farms confront can be a mind-boggling education in hydrogeology, government bureaucracy, and legal minutiae. Last month, representatives from local farms met to discuss this year's troubles and to try to find a common cause in the thicket of information. Marla Camp, a local activist and owner/publisher of Edible Austin magazine, facilitated the meeting that included Marbury, owners of seven local farms, and writer, Chronicle columnist, and former Texas Agriculture Commissioner Jim Hightower.

"Access to affordable water is the key," Camp said of the farm owners' primary concern. She says the group initially formed with an article for her magazine in mind but has since decided to meet on a regular basis. The informal meet-up could even transform into a resource for "a food policy task force."

Erin Flynn of Green Gate Farms, a 4-acre spread located eight miles east of Downtown, agrees that the lack of an organized response has made things more difficult for the farms. Currently, Flynn says, Green Gate has two antiquated wells that are inadequate even without the additional stress of a drought. To make up for shortfalls, the farm uses city water to drip-irrigate its mixed vegetables.

"The whole farming paradigm is shifting," Flynn says. She speaks of challenging the way government entities and citizens currently value – or rather fail to value – local farms. Government policy most often promotes the "highest and best" use of land – which is generally defined in law as monetary real estate value. But Flynn says the ability of small farms to improve recharge by occupying open space over deep-water aquifers adds value, as do healthy food, water conservancy, and the increase in regional quality of life. Yet, she says, "local food isn't at the table when it comes to water." An organized effort could bring local farmers into the equation.

Green Gate, like other farms, could receive a slight discount from the city for an agricultural meter, but the farm would have to invest the huge sum of money to purchase and install it, along with the necessary piping. She bemoans the state, through river authorities such as the Lower Colorado River Authority, giving special rates to major rice farmers while small local farms struggle. But LCRA spokeswoman Emlea Chanslor responds, "There's not a special rate for rice farmers that's not available for other, smaller operations." She said downstream rice farmers and other small agricultural operations are under what's called "interruptible" contracts, meaning LCRA can limit water usage in times of drought. The contracts are for untreated water and don't include delivery, so customers must build their own infrastructure for the water, which could prove cost prohibitive for many small farms.

In any case, Flynn reasons, the creation of a local food policy council would improve the situation. "We are feeding 500 people a week but are charged like we're watering a 3-acre lawn." In July, Green Gate spent $1,800 on water and sold $200 in produce. Each year, it's been getting tougher to make ends meet. "Farms are getting squeezed," she says, "and we can't do things the way we used to." 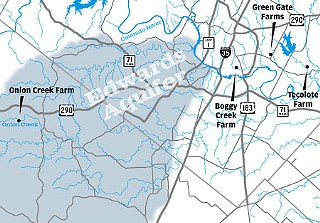 These are just a few of dozens of Central Texas farms struggling to stay afloat during the long drought.

This year, East Austin's venerable Boggy Creek Farm, a 5-acre oasis one mile north of the Colorado River, was forced to scale back its production due to the lack of affordable water. The historic farm has a hand-dug well that plunges 24 feet to what has been a reliable water table for nearly two centuries. In 2006, for the first time, the well began to run dry. Owner Carol Ann Sayle says her husband, Larry Butler, was able to dig the well down a bit farther, giving the farm two additional inches of water. "He just turns the lever just a little bit, because if he turns it wide like we used to, water would rush out really fast, but then it wouldn't recharge. He has to balance how much water is coming out of the well with how fast it can recharge from the surrounding aquifer." If only the region as a whole were so careful with water use.

Boggy Creek gets its water from an alluvial aquifer – a small, local aquifer that is essentially flowing slowly within underground deposits of clay and gravel. While Flynn says some of her problems may be a result of lower river flow downstream from the Longhorn Dam, Marbury doesn't believe the river's manager, the LCRA, is to blame. "The fact that [the farm's] wells are going dry now and never [have] in the past ... has more to do with what conditions have changed in the recharge area for that small alluvial system." A lack of rain, coupled with increased impervious cover, can affect the water table in a small aquifer, she says.

Because of its urban surroundings, Boggy Creek could also be seeing some effects from developments in the area, Marbury adds. "You're getting a lot of growth and additional wells going in, you've got the same volume of resource and more and more straws are going in, so you're going to see some declines in the water tables, and there's not going to be as much available as you get more users."

Tecolote Farm, south of Manor, has perhaps been hit the hardest with the least warning (see "Well of Controversy: Water Hogs Threaten Farm," July 11). Like Boggy Creek and Green Gate, Tecolote is outside any groundwater conservation district and has relied upon an old hand-dug well for years. When several municipal and county pumps were installed near the farm, that exaggerated the farm's elevated position, essentially drying up its water supply. Marbury says this is crucial. "These farms, when you don't have a groundwater district or someone looking out for you – you have no seat at the table when it comes to water negotiations or water availability discussions." This problem is also a relevant issue to western Travis County voters, who may soon be voting on annexation into the Bart-on Springs/Edwards Aquifer Conservation District. 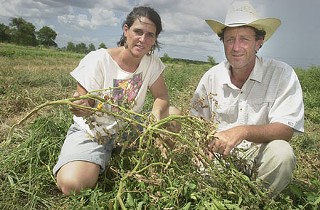 The water issues at Onion Creek Farm stem from the lack of water provided by its namesake creek. While the farm has a state permit to withdraw creek water, in recent years the creek flow has become a trickle. As a result, owner Marianne Simmons hasn't irrigated for months, and her farm – once 3 acres of production – is now down to 20 beds. Onion Creek represents the interesting line between groundwater and surface water. The creek is a tributary of the Colorado River, but it is also spring-fed, and water seeps back into and out of the Edwards Aquifer. Marbury points out that "groundwater has a huge impact on surface water and surface water has an impact on groundwater" and that treating the two as a single resource – not the standard practice in state water use policy – could provide improved management. Simmons says, although the creek seems to run dry more frequently, she tends to believe that droughts are cyclical and the hard times provide "opportunity to get more creative."

One farmer whose creativity is paying off is Tim Miller. At Millberg Farms in Kyle, Miller has constructed an elaborate rainwater catchment system that he uses in conjunction with a planting schedule tailored for Texas rain. At the farm's 10- and 15-year anniversaries, Miller won awards from the BS/EACD for his water conservation efforts, and his lack of wells means he doesn't have to rely on any government agencies to provide his water or regulate its use.

Consumers and farmers alike have a few options left. Hightower said that the farms had "just begun the process of looking for solutions. I don't know the answer, and they don't either, though they have some ideas." He said the farms have been getting stymied at the local bureaucratic level, and his role of "convener" was in part an attempt to get some face time with politicians. "They had problems getting to the proper officials," Hightower said. "I think in large part, they had been going to city bureaucrats, and my point was we need to move up the ladder to talk to the elected officials themselves."

As regional water boards and regulating agencies come together to set policy for the next 50 years, a vocal contingent of concerned citizens has pressured the officials to take a more measured course of action when they determine desired future conditions for the region's water management. David Pitre of Tecolote Farm says he's looking at several different options: lobbying the county to provide more affordable water, talking to the local water district about a more "reasonable" agricultural rate, and possibly tapping a well on a neighboring property which would require a half-mile pipe. Boggy Creek Farm had to resort to a similar solution and this month completed a new, deeper well that should provide some near-term breathing room.

On the other side of town, the BS/EACD is finally talking to residents in western Travis County about annexation into the water conservation district. Residents in the eastern portion of the county might well consider how to follow suit, to escape their own "right of capture" predicament – under which the water goes by default to the most aggressive users, and they don't miss their water until everybody's well runs dry.

Until then, it might not be a bad idea to hold a regular rain dance.