Texas House: GOP Hangs On to a Whisker-Thin Majority

Dems come oh so close to rocking the House 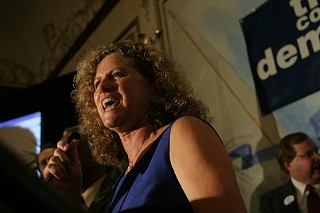 State Rep. Donna Howard talks to supporters after coasting to a victory over Pam Waggoner. (Photo by Jana Birchum)

While most of the results-watchers at the Texas Democratic Party's election night bash at the Driskill Hotel were tracking presidential results, Travis County state House representatives and their campaign staff were waiting on returns from local boxes. Their jobs were simple: Don't lose, so the party keeps its bedrock. Democrats needed five seats to take back the House; overall they picked up six and lost three, leaving the Republicans with a wafer-thin 76-74 majority. Yet throughout the night confusion reigned. Gains were undoubtedly made, but how much, and what they mean, remained a mystery even as the Champagne corks popped for Obama's victory.

In the end, all six Travis County Dems kept their House seats, but it wasn't for lack of GOP effort. In the LBJ Presidential Suite, it was a tense night for Valinda Bolton's House District 47 campaign. Seen broadly as priority No. 1 for Travis Co. Republicans. The GOP had pumped significant cash into opponent Donna Keel's campaign. The Republican performed stronger than Bolton on Election Day, taking 55% of the votes. But since 78% of the district's voters voted early and strongly for Bolton (53%-47%), the incumbent finally held her seat 51%-49%. Bolton said the bitterness of GOP attacks, especially claims that she was soft on sexual abusers, shocked her, and she called the charges "pure Rovian politics." She said her religion and her career defending victims of sexual and physical abuse are "two things that go to the heart of who I am." She added, "To watch those two things be distorted in such a public arena, that has been hard."

On the other side of the jam-packed and sweaty Driskill foyer, in the Cattle Baron Suite, HD 48's Donna Howard had an easier night, handily beating Pam Waggoner 54%-42%. After early voting gave her a 16-point lead, Howard slipped off her shoes and sat, barefoot, watching the last few precincts drip in. Howard acknowledges that her western Travis Co. district has a big conservative population. "But I was pleased to find that people with McCain signs in their yard, they were more than happy to go down the ballot and vote for me," she said. "The good news for me is that I have a district that focuses on the people and the policies and the issues rather than party affiliation."

But there are a couple of wrinkles. Two races are so close that recounts seem inevitable. In Dallas County's perceived Republican stronghold HD 105, incumbent Linda Harper-Brown only beat Democrat challenger Bob Romano by 25 votes out of 40,700 cast, while Jacksonville's HD 11 Democrat Chuck Hopson only held off Brian Walker by 102 votes. So that narrow Republican lead could yet strengthen or collapse to a dead heat. 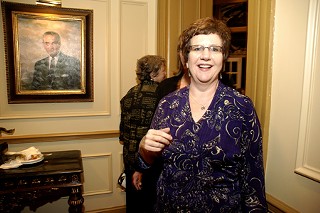 The situation in the Senate is nowhere near as knife-edge, but there's still confusion over its new lineup. Dems had hoped to pick up three Senate seats to improve the current 20-11 split. Joe Jaworski's attempt to dislodge Republican Mike Jackson in Galves­ton's SD 11 sputtered out, and questions will be asked about whether displaced voters after Hurricane Ike played any role in that failure. Yet former Fort Worth City Council Member Wendy Davis took out influential GOPer Kim Brimer in SD 10 – a major scalp for the Dems. And not yet decided is Houston's SD 17 special election, where Democrat Chris Bell topped a field of six with 38% of the tally and heads to a run-off with Repub­lican Joan Huffman. If he wins, the Senate will split 18-13, which Sen. Kirk Watson, D-Austin, sees as a big difference maker. "Even if we only pick up one or two seats in the Senate, it will make a big difference," he said. "The Senate tends to pass more progressive legislation and is more bipartisan. But if it gets to the House and it gets shut down, like last session, it's hard to make progress."