Tweet
print
write a letter
• Public Hearings on SAFPF Torture Anyone who'd like to comment on the state's Sub­stance Abuse Felony Punishment Facil­i­ties may testify Thursday, Nov. 13, 10am, before the Texas Senate Committee on Criminal Justice during interim charge hearings concerning "new and expanded [rehabilitation] programs." SAFPFs, operated by the private Gateway Corp., along with the Texas Department of Criminal Jus­tice, ideally rehabilitate offenders in lieu of their doing "hard time." However, in scores of narratives provided to Austin attorney Derek How­ard since January, inmates charge that SAFPFs are, in reality, state-funded torture. Specifically, they decry the harsh, global punishment of "tighthouse," when inmates must silently sit still, up to 16 hours a day, sometimes for months. The Chronicle reported on the issue this past spring ("Rehabilitation or Torture?" May 23), and Larance Coleman, of Sen. John Whitmire's office, responded by saying the Criminal Justice Commit­tee would "focus on Safe-P programming" during the hearings. But as it turns out, alleged SAFPF abuses will come up only if the public brings them up. "We won't be looking at that specifically, but feel free and come and talk about it," said committee legislative aide Tara James on Tues­day. Meanwhile, Coleman declined further comment until the conclusion of an investigation by the Office of Inspector General. – Patricia J. Ruland

• Eastside Tank Detox It's hard to believe that just 15 years ago a 52-acre gasoline storage facility sat in residential East Austin. In 1993 it was discovered that the so-called East Austin Tank Farm, near the corner of Airport Boulevard and Springdale Road, was contaminating the soil and groundwater, which community groups linked to illnesses in surrounding neighborhoods. Later that year, a deal to relocate the tank farm was struck with the companies using the site, including Chevron, ExxonMobil, Coastal, and Citgo. Cleanup efforts have been under way ever since, overseen by the Texas Commis­sion on Environmental Quality. Meanwhile, the city downzoned the property to prevent future industrial use and last week held a public meeting to announce that the cleanup was nearly complete. Eastside nonprofit People Organized in Defense of Earth and Her Resources played a key role in forcing the tank farm's closure and cleanup. Director Susana Almanza said, "We're glad it's finally over, but in a way, it'll never really be over since the site was cleaned up to industrial and not [stricter] residential standards, as the surrounding community requested." PODER has met with a prospective buyer for the land and hopes its redevelopment will include businesses, such as grocery stores and doctors' offices, to serve the long-isolated community. – Daniel Mottola

• What Would Col. Brackenridge Do? On Monday night, more than 100 people gathered at the Lower Colorado River Authority headquarters to hear the preliminary presentation on the fate of the Brackenridge Tract, a 345-acre swath of West Austin land owned by the University of Texas. Various stakeholders, including representatives from Cooper, Robertson & Partners and TBG Partners, spoke during the three-hour-long PowerPoint presentation. The glut of information touched on New Urbanism concepts, similar university projects, environmental considerations, community feedback, traffic data, the history of Austin's development, and draft proposal concepts. These concepts included context and compatibility, place-making and the public realm, compact development, ecology and the environment, sustainability, feasibility, flexibility, economic viability, and a respect for the legacy of the tract, which was left as a gift by Civil War profiteer and philanthropist Col. George Washington Brackenridge. The crowd had only a few questions – including why the university would have allowed the past sale of a portion of the Brackenridge Tract despite recent insistence on maintaining the entire unified parcel. Throughout the week, small citizen groups will be tinkering with five different theoretical scenarios ranging from a complete overhaul of the tract to simply leaving it as is. Friday will see another presentation outlining any common themes that may emerge from the workshops. – Jacob Cottingham

• Capital Punishment Symposium Lawyer and unrelenting human rights activist Stephen Bright will open a celebration of the 20th anniversary of the Capital Punishment Clinic on Thursday, Nov. 13, 12:30pm, at UT's School of Law. Bright is president of the Southern Center for Human Rights and a national expert on issues of racial bias, incompetent counsel, and other injustices in the capital punishment system. The Capital Defense Lawyering and Practice symposium also features 5th U.S. Court of Appeals Judge Patrick Higginbotham, Texas lawyer Rich­ard Burr, and District Judge Charlie Baird. The symposium is free and open to the public; more info at www.utexas.edu/law/academics/centers. – Rita Radostitz

• More FLDS Raid Fallout An Arizona judge has ordered three Texas lawmen to talk to lawyers representing imprisoned polygamist leader Warren Jeffs – or face deposition. Jeffs, leader of Mormon breakaway sect the Fundamentalist Church of Jesus Christ of Latter-day Saints, faces multiple counts of being an accomplice to sexual conduct with a minor (for marrying underage girls to adult male relatives). Jeffs' attorney, Mike Piccarreta, told Mohave County Attorney Matt Smith and Superior Court Judge Steven Conn that he wanted access to the Texas officials because he's concerned that evidence seized during the April raid of the FLDS compound in Eldorado, Texas, might be used in prosecuting Jeffs in Arizona. Although Smith has said evidence procured in the raid has been separated from the Arizona evidence, Conn was unconvinced the state would not use the Texas evidence as part of its prosecution, reports the Deseret News. The three lawmen – Schleicher Co. Sheriff David Doran, Deputy Sheriff John Connor, and Texas Ranger Brooks Long – have declined to be interviewed. Conn's ruling gives them 45 days to comply, reports The Salt Lake Tribune. "If the Texas law enforcement officials have nothing to hide, they should have no objection to being interviewed or deposed," Conn ruled. – Jordan Smith

Former death row inmate Juan Melendez describes how he crafted a noose and almost committed suicide during his nearly 18-year stay in a Florida prison, before he was exonerated and released in 2002. Behind Melendez are (l-r) Shujaa Graham, Earl Washington, and Freddie Pitts. They were among 20 innocent men once condemned to death row who appeared at the state Capitol Oct. 31 as part of the national Witness to Innocence effort to halt the death penalty. Above, Austinite Delia Perez Meyer shows a photo of her brother, Louis Castro Perez (center), who she believes was wrongly sentenced to die for the 1998 murder of two women and a young girl in South Austin. 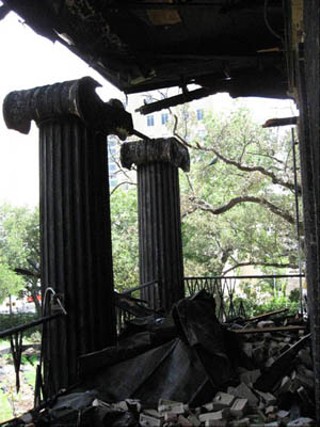 According to Deloitte Consulting, the Texas Department of Public Safety is in need of a major overhaul. The consulting group was hired by the state to complete a 10-week study of department operations in the wake of the Governor's Mansion arson earlier this year. Among the major recommendations: Combine all law enforcement divisions under a single deputy director and strengthen the regional command structure, create an "Intelligence and Counter-Terrorism Division ... to facilitate information sharing and intelligence led policing," and combine all licensing and regulatory functions (including driver and concealed-handgun licensing) under a single deputy director to create a "customer-focused management structure." (The entire report is available on the DPS website at www.txdps.state.tx.us.) – Jordan Smith

Jacob's Well Is a No-Flow

Jacob's Well, the popular natural spring and historic swimming hole in Wimberley, has been under enormous strain during this long drought – and it's beginning to show. Jack Hollon, District 5 board member for the Hays Trinity Groundwater Conservation District, which manages the well, said the water is currently flowing below 1 cubic foot per second – "which means that when the big water companies around us turn on their pumps to fill their tanks, they can shut the flow off – and that's been happening for a few days now, off and on." The spring is feeling the combined effects of drought and pumping, Hollon explained, and the new demand on the Trinity Aquifer is causing the well to "bump up against reality." The news is especially disturbing given its historical context. According to Hollon, this is only the second time since the arrival of European settlers that the well ceased to flow. Yet more disturbing is the fact that the last cessation was a mere eight years ago. Even during the worst drought on record – a seven-year scorcher in the Fifties – Jacob's Well continued to flow. – Jacob Cottingham

Well, it took several long months, but why dwell on the negative? KB Home finally came through! After waiting six months, the seven construction workers who were owed back wages from the housing giant got paid last week for work they did back in April. (The delay was caused by a serious case of pass-the-buck involving KB Home and several subcontractors.) Fortunately, a check in the amount of $7,000 arrived in the workers' hands thanks in no small part to pressure from the workers advocacy group Workers Defense Project/Proyecto Defensa Laboral, whose negotiations with KB Home eventually culminated in a protest outside their local headquarters in September, drawing 40 or so members of local unions and community groups. A representative from KB contacted PDL's Emily Timm the following day, assuring her that the workers would get their money. And they did. "My family is so relieved," says Manuel Santiago, who will get about $800 of the $7,000. "It may not be much money for a large company like KB, but for us it makes the difference of meeting the basic needs of our children." – Diana Welch