Another Dream Deferred on East 11th 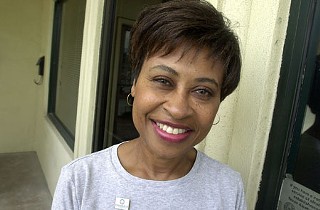 The doors have closed on Ms. B's Restaurant in East Austin for the final time. No last-minute effort will rescue East 11th Street's signature restaurant, which was supposed to have been part of a resurgence of the area led by the Austin Revitalization Authority.

Billy and Brenda McGowan – the Bs of Ms. B's – still go to work every day in the kitchen at their much smaller and less glitzy restaurant on Mesa Drive in Northwest Austin. The menu – dark-roux gumbo, crawfish enchiladas, and signature sweet-potato pecan pie – is still the same as it was at their East Austin restaurant, which was shuttered Oct. 14 for failure to pay $70,000 in back rent.

For a while, there lingered the possibility that Ms. B's, which has a small but loyal lunch clientele, might stay open. Brenda McGowan said she and her husband had haggled with ARA president and CEO Byron Marshall over the restaurant's future, first making one proposal and then another, hoping to get the doors reopened. (Marshall did not respond to a Chronicle phone call or e-mail requesting comment.) "We finally realized he was not going to do it, that he had no intentions of ever working with us," McGowan said last week. "Finally, I said, 'We cannot afford to pay you this kind of money.' And that was it."

Ms. B's was a showcase for the ARA, the first restaurant to open in one of its first new commercial buildings on East 11th and a sign of the hip, New Urban personality that ARA intended to bring to revitalize the Eastside corridor.

The ARA persistently courted Ms. B's, McGowan says, pointing to the table where Marshall urged her to consider relocating to East 11th, promising that the redevelopment of the various blocks along the street could come in three to five years. McGowan remembers four restaurants – she lists them by name – that were on Marshall's short list at the time. All were local, most well established. By the end of negotiations, Ms. B's was the only one left at the table. At the time, McGowan might have thought of it as luck.

Ms. B's opened in East Austin in January 2006 and lasted 2½ years. Like many restaurants tied to city-backed redevelopment projects, it's been a tough haul. Even City Hall's Austin Java – well established and located at the edge of the Second Street retail district – recently had to cut back on food service due to lagging evening sales.

So what went wrong with Ms. B's? During a market analysis, neighbors said they were thrilled to have the restaurant in the neighborhood. They wanted restaurants and retail rather than clubs. In fact, McGowan remembers Marshall saying that being near the new area of the Robertson Hill neighborhood was a selling point. Still, the restaurant's dining room was all but empty most evenings, and the bar was rarely full.

For one thing, there simply wasn't enough traffic. For almost a year, Ms. B's was alone in the development before it was joined by another restaurant. Retail space remains vacant. And McGowan's efforts to bring Marshall potential clients – eclectic shops that might fit into the personality of East 11th and turn it into a mini-South Congress Ave­nue – never resulted in bringing in any neighbors.

"I remember asking, 'What other restaurants are coming?' and he said: 'None right now. We didn't want you to have too much competition,'" McGowan said. "Well, that's not how it works. You want other restaurants around. For a year, we had nobody around, and I told Byron, 'If we didn't already have a following, we would have closed six months ago.'"

Rent was high, but there were also problems with configuring space, McGowan said. It was like the Jimmy Snell Building – one of two new retail/office buildings the ARA opened in late 2004 – which was built with no concept that a restaurant might eventually be located on the first floor. So to put in a proper cooking vent – three stories above the restaurant's ceiling – was a tremendous expense, McGowan said. Something as simple as placing a grease trap was far more difficult than it should be. ARA's build-out incentives hardly came close to covering the $500,000 the McGowans spent to finish out the restaurant and get it ready to open.

None of the current circumstances surrounding East 11th worked to the McGowans' advantage: Redevelopment of surrounding blocks has been delayed; commercial space has been placed at a higher premium than new residences; and utility costs, divvied up by ARA, have been exorbitant. McGowan said the electric bill for Ms. B's was three times what it is at her Mesa restaurant, up to $2,500 a month.

Marshall has his own back against the wall. ARA owes $130,000 to the city of Austin on a $330,000 predevelopment loan that dates back to 2006. So it's not surprising when McGowan suggests that Marshall started showing her space to new potential tenants at the end of last year.

The McGowans' lender has first lien on the property, so it's likely everything from the dishes to the furniture will go out the door. Hopefully, when it's all done, the McGowans will be able to pay off the back rent they owe ARA, McGowan said.