Republicans Are So Naughty

Cornyn & Co. is stealing our stuff!

That's the message one might get after a minor rash of GOP candidates using copyrighted materials in their ads without authorization. A few of the candidates got their comeuppance, however, as their campaign websites got temporarily yanked by their Internet service providers.

Now, the Chronicle is hardly a disinterested observer in this controversy. Last Friday, the campaign of U.S. Sen. John Cornyn sent out a Web-only (we think) ad showing Democrat Rick Noriega giving a fired-up speech to supporters at Austin's Victory Grill. The rather scurrilous point of the ad was to compare the excited Noriega to the wild "hee-yah!" speech that kneecapped Howard Dean's 2004 run for the presidency. How did they smuggle out the footage from an all-Democrat party? Why, they simply stole it without permission from austinchronicle.com's Hail to the Hustle. Their use of the footage appears to violate the Chronicle's copyright, but as of press time, the campaign had refused to pull the footage from its website.

The day before, Democratic bloggers Vince Leibowitz (Capitol Annex, www.capitolannex.com) and Rachel Farris (Mean Rachel, www.meanrachel.blogspot.com) complained that the campaigns of District 10 Rep. Michael McCaul and state House District 17 candidate Tim Kleinschmidt used their material without permission – a McCaul spin-off site attacking Democrat Larry Joe Doherty reprinted an entire article by Leib­owitz, and Kleinschmidt stole a Farris photo to attack Dem Donnie Dippel in a glossy mailer. As it turns out, both McCaul and Kleinschmidt are clients of GOP Web designer Colton Brugger, and after Leibowitz filed a complaint, ISP GoDaddy yanked everything Brugger did through its service – mean­ing not only did the anti-Doherty site disappear but so did McCaul's and Klein­schmidt's main campaign sites, as well as those of Supreme Court incumbents Wallace Jefferson and Phil Johnson. The sites were down for about 48 hours, from Friday to Sunday, after which Brugger found a new ISP and restored the sites to greater or lesser degrees of functionality, minus the stolen material. 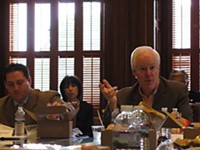