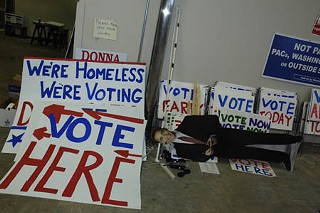 It's a sign of the times at Democratic headquarters as volunteers, aided by a cutout of Barack Obama, prepare to blanket the town with political signs in the run-up to Election Day. (Photo by Sandy Carson)

• BUS DRIVER STRIKE LIKELY Members of Amalgamated Transit Union 1091, representing Capital Metro's bus drivers and maintenance workers, have voted overwhelmingly against accepting the final contract offer from StarTran, the subcontractor that handles Cap Metro's personnel issues. The vote was 57 for, 390 against. "This picture is very clear that our members do not feel that the package proposal that Capital Metro and StarTran want to force onto the workers is reasonable and fair," the union said in a press release Monday morning. Rising insurance premiums are at the heart of the conflict. The press release said that on Oct. 31, the union will alert the public as to when the strike may start. Because state law forbids public agencies such as Capital Metro from recognizing a union but federal law requires it, StarTran was created by the transit authority to serve as a subcontractor that is technically the workers' actual employer. Said StarTran head Terry Garcia Crews: "I was disappointed, because this is a fair and equitable compensation package. I have a mutual desire, like the union, to return to the table and continue further discussions." – Lee Nichols

• GOODBYE, MS. B'S Owner Brenda McGowan confirms that Ms. B's Restaurant will not be reopening on East 11th after a 2½-year run. The business was shuttered on Oct. 14 over back-rent issues. This week, McGowan confirmed that she and her husband, Billy, were unable to broker a deal to pay back-rent to the Austin Revitalization Authority. The restaurant's fixtures will be sold to repay a loan and clear up the rent issues. McGowan said she expects some other business to be moving into the Ms. B's space shortly. – Kimberly Reeves

• COMPREHENSIVE-PLAN DEADLINE UPON US The city has budgeted $1.3 million for paying an experienced consultant to spend the next two years developing a new comprehensive plan for Austin's growth, a process that will include substantial community input. The deadline for consultant teams to submit qualifications is Monday, Nov. 3. According to the request for qualifications: "The new plan is needed to chart Austin's near, intermediate, and long-term future to preserve and enhance the community's cherished quality of life. The plan will need to address key themes currently at the center of civic debate such as growth and development, sustainability and climate change, environmental protection, neighborhood preservation, affordable housing, economic development, and local and regional mobility." Some are already lobbying for a "sector planning" process to ensure geographic representation; see www.austinforeveryone.blogspot.com. See the qualifications request at www.planetizen.com/node/35453, or e-mail carolynd.williams@cityofaustin.org for a copy. – Katherine Gregor

• ENERGY EFFICIENCY FOR HOME BUYERS Austin may soon become one of a handful of U.S. cities ensuring that consumers can review energy audits and energy-use reports on homes for sale, much like reviewing the gas mileage of cars or the energy usage of new appliances. City Council votes on the measure, a recommendation of the Energy Efficiency Upgrades Task Force, on Nov. 6. Environmental Defense's Jim Marston noted: "Austin consumers have the right to know about the true costs of owning or renting. This means knowing what utility costs will be and ways they can save money. This is important under any circumstance, but it's especially critical in a time when we are all budgeting more closely. ... Reducing demand on the power grid also keeps everyone's utility bills lower [and] helps prevent the need for building more coal-fired power plants." The Environmental Defense Fund and the Austin Board of Realtors recently endorsed the consumer-friendly city initiative, though many basic energy-efficiency upgrades had to be eliminated to win ABOR's support. If approved, the new requirement takes effect in six months. Financial assistance will be available to certain buyers who voluntarily make improvements that reduce a home's energy use and utility bills. See more at www.coolaustin.org. – K.G.

• TRAVIS COUNTY GOES GREEN Following in the city of Austin's carbon footsteps, the Commissioners Court voted unanimously Oct. 28 to adopt a new Travis County Green Initiative, proposed by Commissioners Sarah Eckhardt and Margaret Gómez. According to Eckhardt's memo to the court, it will "promote the principles of energy conservation, zero waste, efficient use of water and other natural resources, and move toward a carbon neutral County government." The resolution created a Green Committee to assess county policies and procedures and recommend improvements; the committee will present an action plan to the court in one year. Like the Austin Climate Protection Plan, it might aim to make all Travis Co. facilities, fleet vehicles, and operations carbon neutral by 2020. Departmental plans, new property-tax incentives, landfill strategies, and eco-friendly economic development are likely components. Noted Eckhardt, "A Green Initiative would likely strengthen the market for green building, recycling, waste minimization technology, and low impact development." – K.G.

• DISABILITY EMPLOYMENT AWARDS The Austin Mayor's Committee for People With Disabilities recently held its 29th annual awards ceremony, recognizing businesses and individuals who have contributed positively to the lives of those with disabilities. Jared the Galleria of Jewelry, Image Microsystems, and the Austin Hilton were awarded for their dedication to employing people with disabilities – including Nathan Levine, who has severe autism and earned the Employee of the Year award for his work as a kitchen steward at the Hilton. Other honorees included attorney Brian East, who has spent many years advocating for the disabled; Lori Barta, who has worked to raise public awareness of Down syndrome; and Nancy West, who was honored with the Entrepreneurship Award for running a successful business, coping with bipolar disorder, and working with others who are disabled. Congratulations to the Chronicle's own Richard Whittaker, who was honored with the Media Award for his reporting on the UT Accessibility Institute ("Accessibility Institute," Sept. 12). For more, see www.cityofaustin.org/ada/amcpd.htm. – Nora Ankrum

Something to Sing About 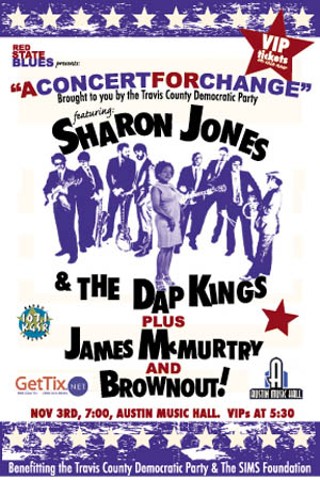 Sure, the real election celebration may be taking place in Chicago next Tuesday, but closer to home, Red State Blues: A Concert for Change is doing its best to rally the Democratic faithful. The rally is going down at the Austin Music Hall, Monday, Nov. 3, 7pm, featuring tunes from locals Brownout and James McMurtry, plus Brooklyn headliners Sharon Jones & the Dap-Kings; the show benefits the Sims Foundation and the Travis Co. Democratic Party. "It all started here [in Austin] with Bush 13 years ago," says event organizer Kay Gourley, "so how apropos this is where it's going to end. ... Let's celebrate together." For more info, visit www.myspace.com/redstatebluesconcerts or www.gettix.net. – Wells Dunbar

The Office, Saturday Night Live, and the rest of NBC's programming returned to Time Warner Cable on Wednesday, after the cable company and KXAN owner LIN Tele­vi­sion settled their monthlong disagreement over retransmission fees. No details were disclosed – they never are in these cases – but LIN was seeking cash payments in exchange for giving Time Warner the right to air its stations' programming. Twelve LIN stations were affected by the dispute. Not coincidentally, the settlement comes hours before the start of the November sweeps ratings period. – Kevin Brass

Austin native Patrick McGarrigle has put together a treasure trove of Sixties-era video footage culled from reels of film found in an alley off of Red River Street. "What They Sayin': A Tribute to Austin Protesters" is a lovely, grainy remembrance of another era – civil rights demonstrations, the Cuban Missile Crisis, the Vietnam War. Some familiar faces appear onscreen, including Margret Hoffmann in a 1963 "Easter March," in which a small group of peace activists walked from the Capitol to the gates of the former Bergstrom Air Force Base, and a camera-toting Alan Pogue, who had recently returned from the war. The video can be viewed on YouTube (search by title) or rented at Vulcan Video. – Amy Smith

Would you be my, could you be my, won't you be my Green Neighbor? Hi, neighbor, have you ever wondered how you can do your part to protect our climate, water, and air while conserving water and natural resources? What about how to dispose of waste and chemicals or where to find local gardening tips? Sure you have, because you're special just the way you are. And to help you out, the city of Austin has updated and improved its Green Neighbor program with a new booklet and Web resources featuring tips and info on environmental protection. Individuals or neighborhoods can also compete in the Green City Challenge to win T-shirts or free passes to Barton Springs Pool. The new booklet is the collaborative effort of 11 city departments and gives stats on why certain green strategies, such as composting or regularly changing home air filters, are beneficial. It also organizes tips into categories of action items with associated scores and provides info on city rebates and programs. Booklets are available at Austin public libraries and at www.cityofaustin.org/watershed/greenneighbor. The city's Environmental Portal at www.cityofaustin.org/environmental is another handy resource cataloging all its greening initiatives. – Daniel Mottola

The city has agreed to partner with the YMCA of Austin on initial master-planning for the site that includes the Lady Bird Lake YMCA, the Town Lake Animal Center, and adjacent parkland. The Parks & Recreation Department wouldn't ordinarily proceed with a new master plan before the animal shelter had moved (a new Eastside shelter won't open for a while), but the Y is on a faster track than the city, having hired architect KA Hickman to renovate and expand its Lady Bird Lake facilities. So as not to hamper a holistic consideration of the site, Council Member Sheryl Cole successfully sponsored a council resolution directing the city to participate in the Y's planning process. The West Austin Youth Association, which operates athletic fields on the surrounding parkland, will help kick around ideas (which won't include condos but could include a new water feature, spray playground, or outdoor pool). One shelter building is slated to become an animal adoption center. Soon to rise across Lamar is Gables Park Plaza, a private project with an 18-story condo tower, eight-story apartment building, and about 42,000 square feet of retail/restaurant/office space. Ideally, PARD would speed up its own master plan for the site; look for direction from new PARD Director Sara Hensley, who starts Dec. 1. – K.G.