Can Everyone Just Calm Down? 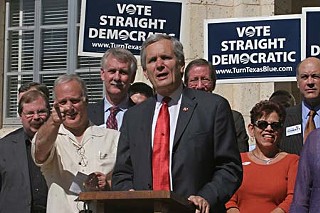 Every election season brings yet another round of dirty tricks and voting problems – some of them real, some imagined. And it didn't help things that Travis County Elections Division shot itself in the foot last week. A rundown of what's popped up locally:

• On Friday, election workers didn't properly lock the door at an early-voting polling place after closing up, and to make things even worse for Travis County Clerk Dana DeBeau­voir, a pair of local residents then filmed themselves pushing open the doors and walking around among the electronic voting machines. The video was quite the hit on local TV news over the weekend.

The last judge to leave actually did attempt to lock the doors, DeBeauvoir said, but didn't realize that the door needed to be bolted at the top and bottom in addition to the regular dead bolt in the middle.

DeBeauvoir tried to calm voter fears with a press conference on Monday in which she demonstrated the Hart InterCivic eSlate voting machines' security features and made it clear that all of the electronic "ballot boxes" within the machines had been removed at the close of voting day by law enforcement personnel, and seals on the remaining equipment showed no evidence of tampering.

"We consider this a 'little deal' problem, not a 'big deal,'" DeBeauvoir said. "There was never a risk to the voting system or any of the ballots that have been cast so far. ... What was left was not interactive and had already been sealed." The judge in question has since been retrained on proper close-up procedures.

DeBeauvoir also said that if a citizen spots another such security problem, the proper course of action is not to go running to the media with video but to immediately call law enforcement.

• DeBeavoir also tried to calm paranoia about the "ballot box sleepover," wherein the electronic ballot boxes and control terminals spend the night with election judges so that the more than 200 polling places can open by 7am on Election Day. She demonstrated a lock on the boxes that contains a plastic part, with a serial number, that shatters when opened. Also, the control terminals are sealed in the same type of tamper-proof plastic bags used by banks.

• Another problem is the spread of a pair of e-mail hoaxes; one of them is malicious, and the other, while apparently inaccurate, might actually do some good – but unfortunately besmirches the reputation of DeBeauvoir's Elections Division (beyond any damage it already did on its own with the unlocked door). The evil one, which we reported on last week ("Naked City," Oct. 24), tries to trick Democratic voters into canceling out their votes for Obama by telling them that after voting straight-ticket, they must then also check the box by Obama's name. (In fact, doing this would actually cancel your Obama vote, so don't do it!) Here in Travis County, law enforcement officials are still looking for a white male in a business suit who allegedly posed as a poll worker and gave similarly incorrect instructions to voters outside of a polling place on Ben White Boulevard. When confronted by real election workers, he fled in a Chevrolet Impala festooned with pro-Republican bumper stickers.

• The second e-mail may actually help counter the first, but it also nonetheless appears to contain a hoax. We have received several variations of an e-mail claiming that a Travis Co. voter punched straight-ticket Democrat, but the machine flipped his/her vote to McCain. The telltale red flag for us is that these incidents always happened to "a friend of mine" or "a friend of a friend" – we have yet to have anyone tell us that it actually happened to them. DeBeau­voir said she has received no direct complaint either.

However, the end of the e-mail always warns voters to proofread their choices when they get to the confirmation page – which, in fact, is exactly what DeBeau­voir would counsel under any circumstances.

• One last thing: If for some reason you are not listed on the voting rolls, that doesn't mean you can't vote. If you believe you were improperly left off, request a provisional ballot. If it is later determined that you should have been on the rolls, then your provisional ballot will be included in the final totals. 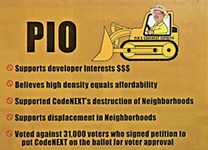