From the statehouse to D.C., the journey begins with a single vote

It was reassuring, I suppose, to see Texas Assoc­iation of Business President Bill Hammond revert to type last week, as he first formally apologized for breaking the law and then resumed complaining that it was the cops who were in the wrong all the time. Having pled guilty to violating black-letter state campaign finance laws that prohibit the use of corporate money in political campaigns – as Hammond had done abundantly in the 2002 state House election and then bragged about it – he was forced to read a court-ordered confession and apology (as quoted in the Statesman): "I now recognize that while working as a salaried employee of the Texas Association of Business, it was a violation of the law to expressly advocate for the election of these candidates. I take full responsibility for my actions. I apologize to the voters of Texas and to the members of the Texas Association of Business."

A few hours later, Hammond cravenly withdrew his apology, took responsibility for nothing, and blamed the whole thing on Travis Co. District Attorney Ronnie Earle. "Six years of political persecution by Ronnie Earle has come to an end with a misdemeanor over a bookkeeping error," he told Corrie MacLaggan. "Hundreds of thousands of tax­pay­er dollars that could have been used to protect our streets have been wasted." You don't plead guilty to a "bookkeeping error," and the only reason the prosecution took six years is that Hammond and the TAB forced one legal delay after another in an attempt to dodge a conviction, and all the while his House Republican surrogates enjoyed the fruits of his crime (pled down from a felony to a misdemeanor only because of the potential for even more delay and public cost).

Frankly, Hammond's retractions smack of contempt of court, as the whole point of the apology was to force the TAB to come clean about its illegal actions. But the final episode is thoroughly in keeping with Hammond's behavior throughout his tenure. He knew full well that raising corporate money for electioneering was illegal, but he did it, as he said at the time, because it was easier than raising legal funds from individuals. After pouring the illicit money into two dozen House races and winning most of them, he and the TAB bragged about "blowing the doors off" the Texas House and electing "the first pro-business Legislature since the Civil War." (You probably no longer recollect all those communist Texas Legislatures of the 20th century.) Caught red-faced bragging about the corporate purchase of the election, Hammond then reverted to claiming TAB was only "educating" the voters with constitutionally protected "issue ads." And except for this $10,000 fine and the apology, he mostly got away with it.

After six years of defendant foot-dragging, the TAB story has apparently so exhausted Capitol bureau reporters (or their editors) that among major Texas dailies, only the Statesman saw fit to report Hammond's guilty plea. Statesman editors warned dourly that corporate underwriting of campaigns was largely vindicated and that we should expect it only to get worse. Certainly their featured op-ed last week by "special contributor" Jack Campbell, Hammond's lobbyist co-defendant who is now plying his sleazy consultant's trade in Alabama, suggests that they're right. Campbell delivered a virtual confession of how the crime was accomplished – modeled on similar corporate campaigns in Florida – and justified it all because prior Legislatures, run by "unabashed despot" House Speaker Pete Laney (whom I suspect will get a good laugh out of that one), were so anti-business they made the angels weep.

In truth, although the Hammond/Camp­bell direct-mail campaign directly flouted the Texas prohibition against corporate underwriting of political campaigns, Campbell's bragging is exaggerated – it was as much the 2001 legislative redistricting that won the 2002 election. That election thereby enabled now-disgraced Rep. Tom DeLay's strong-arming of the GOP Lege to re-redistrict the state's congressional delegation – itself a centerpiece of the hard-right Republican overreaching that has now brought low the party of Bush, Cheney, and DeLay; ruined the GOP brand perhaps for a generation; and helped create the conditions for a nationwide Democratic backlash and revival. So I guess we could be giving thanks to the likes of Hammond and Campbell: They helped make possible the impending presidency of Barack Obama.

Next to the mess Bush and company have made of Washington, I suppose the parlous state of the Texas Capitol doesn't amount to much. Last week, the U.S. attacked Syria, and we continue to threaten war on Iran – the threats themselves, not to mention mostly unreported covert attacks, a violation of international law – in what is claimed to be a defense of international law. Meanwhile, hundreds of thousands of Iraqis and Afghanis continue to pay with their lives for our political and military follies. In the context of all that carnage, the political makeup of the next Legislature – and how more or less fanatically "pro-business" it is likely to be – seems a good deal less important.

But folks, this is where it all started. Where George W. Bush got his first political sinecure, where pest exterminator Tom DeLay first stepped on the road to petty tyrant, and where professional political hust­lers like Bill Hammond and Jack Campbell decided that illegally buying legislators by the dozen was cheaper and more efficient than legally engaging in the long, hard slog of retail politics when nobody is buying.

Your vote may not be worth very much on its own. But when it joins a nationwide wave of citizens who have decided they are sick and tired of the way our self-designated leaders have been engaging in "business" as usual, it can begin to transform the whole country. An election is not an end, but a beginning. 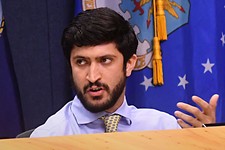