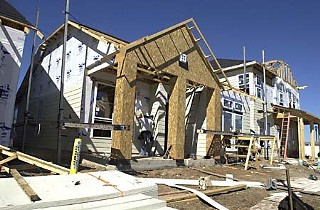 Of the new houses and apartments going up at Mueller, 25% are affordable housing. But the economic engine that helps subsidize that affordability – the city's contribution of its proceeds from land sales – could be dismantled if Prop. 2 passes, leaving the affordable-housing program in limbo. (Photo by John Anderson)

It's no coincidence that Mueller and the Domain are the two major city development-incentive contracts that would be affected by Proposition 2, the Stop Domain Subsidies charter amendment. In both cases, City Coun­cil made a strategic decision to invest taxpayer dollars in a large-scale redevelopment to get a New Urbanist project – the kind of walkable, live-work-play, transit-oriented places that current council policy advocates for Austin. The Mueller neighborhood, on the site of the old airport, is a significantly better example of New Urbanist design than the Domain, in far Northwest Austin. But both moved in the right land-use direction.

The Stop Domain Subsidies campaign presents Prop. 2 as a jolly good way to stick it to fat-cat developers, City Hall, Neiman Marcus, and Tiffany & Co. Here's what proponents don't say: The proposed amendment also strips away city incentives as a policy tool for encouraging developers to reflect Austin community values. Prop. 2 makes no distinction between city incentives that encourage economic development (i.e., pell-mell growth) and city incentives that encourage mixed-use projects (an antidote to sprawl). For folks who distrust developers and favor sustainability, that should be a problem. We want the city to have more power and tools to positively shape development, not less.

Some proponents of Prop. 2 favor its passage as a way to "send a message" telling City Hall that opaque, insider dealings with developers and "growth for growth's sake" economic development is not acceptable. It's a pugnacious challenge to elected officials and city management – to admit, own, and publicly correct the perceptions of developer-dealing behavior that led to a breakdown in citizen trust, sufficient to get some 18,000 signatures on a charter-amendment petition.

But that doesn't make it a good law.

The Domain agreement, crafted in 2002, was Austin's first of its kind; in retrospect, that council (spooked by an economic downturn) could have pushed harder to get more community benefits for its $25 million in subsidies (in 2003 dollars). But council members did use the subsidies to leverage improvements, aligned with community policy interests, to the development plan: a mixed-use project with homes directly above retail (Will Wynn), affordable housing (Raul Alvarez), and local businesses (Jackie Goodman).

When the city signed the Mueller contract a year later (with far more community input), it got a better development and deal: more community benefits incorporated into the urban design for its contributions of sales and property taxes, land sale proceeds, and other financial help. But such incentives are barred – retroactively and for the future – under Prop. 2, outside of tax increment financing. (A TIF expenditure, other than a tax abatement, is exempted from the definition of a financial incentive.) The language of the proposed charter amendment sweepingly prohibits the city from providing financial incentives – including any "grant of funds" – to any development with "one or more retail uses."

Tools in the Toolbox

While the proposed amendment lists seven specific exceptions to the definition of "financial incentives," there's not one for affordable housing. By state law, cities can't force developers to provide housing for less-wealthy citizens; that leaves the carrot of incentives as the city's only tool. If Prop. 2 passes, even existing "SMART Housing" city incentives could become verboten for new mixed-use projects. The city potentially couldn't help with the costs of a project such as Villas on Sixth: deeply subsidized affordable housing that includes a coffee shop on the ground floor. Affordable housing units in a vertical-mixed-use project couldn't be "bought down" with a check from the city (which has $55 million in voter-approved affordable-housing bond monies). Given the highly risk-adverse mindset of city legal, it's most likely that the city would simply stop even "gray area" financial incentives rather than expose the city to possible legal action.

Since the Domain deal was signed, council has made real progress in enacting wiser land-use policies, stronger urban-design guidelines, and heftier community-benefit contributions from developers. If Prop. 2 passes, it will reverse some of that progress by disallowing incentives that encourage good behavior – such as denser, close-in, mixed-use projects.

Mayor Wynn commented: "Whether folks in Austin want to accept this or not, 'mixed-use, urban density' is the answer for all of our challenges, from water conservation to reducing vehicle miles traveled to energy demand and greenhouse-gas emissions. Since that's the case, why in the world would we arbitrarily take any tool out of our toolbox to try to help deal with our challenges?"

No city staff would touch questions submitted for this article, or even provide basic facts on existing city incentives, due to an injunction from city legal barring all election-related statements. At the suggestion of Council Member Laura Morrison, I reviewed the charter amendment language with attorney Jim Cousar of Thompson & Knight, the city's longtime outside counsel for Mueller. His legal opinion to council was that it clearly applies to the Mueller contract. (Unlike other Austin outside counsel I've interviewed in the past, Cousar provided a balanced and seemingly unprejudiced reading of the amendment. "Nothing I say should be interpreted as a political message," he emphasized.)

The short version of Cousar's review: Prop. 2 would require renegotiation of the master development agreement between the city and the master developer, Catellus. The parts of the MDA prohibited under the new charter amendment – the core financing mechanisms – would need to be redone. The complex public-private agreement is embedded in an intricate financial structure, which took two years and many lawyer hours to craft. "No one wants to go back and renegotiate the MDA," Cousar observed. "It has a lot of moving parts, it's five inches thick, and if you start monkeying with the financial components, it gets very complicated. I wouldn't say it's not doable – but it reopens a very delicate business contract. It would be expensive." When I pressed him for a guesstimate, Cousar said, "I don't know how many tens of thousands it would take."

The new charter amendment would conflict with the MDA provisions that obligate the city to annually contribute sales taxes (collected at Mueller stores) to pay off $12 million in infrastructure bonds. Council would quickly seek a judicial ruling that it could continue paying for the bonds, said Cousar, to resolve the conflict and any ambiguities. A swift resolution would be crucial to avoid harming Aus­tin's top AAA bond rating, and given current Texas law, Cousar said, "I think it's very likely that the court would rule that the bond obligations and the sales tax being dedicated to them are valid, in spite of the charter."

All in a TIF

Far more problematic is the city's obligation to contribute the proceeds of land sales, again to help pay for Mueller's infrastructure. What's the closest thing to a quick fix? Cousar said one option would be to create a new TIF structure that could capture equivalent revenues for Catellus. Possibly a bigger TIF could also compensate for other stricken incentives (e.g., utility improvements, pond and parkland maintenance).

Of course, exempting TIFs from Prop. 2 doesn't make much sense. Tax increment financing allows the city to contribute new increments of property-tax revenue (and by more recent state law, sales-tax revenues) to help pay for the infrastructure needed by a development. If a property that used to yield $1 million in tax revenues now yields $3 million, due to redevelopment, the extra $2 million is "tiffed" to pay off the project costs. So a TIF can help developers make projects with retail economically viable by contributing city property- and sales-tax revenues – exactly what Prop. 2 otherwise rejects.

Which takes us back to square one. While citizen watchdogs certainly need to hold them to it, last December, council passed a resolution (No. 20071206-049) saying that it's gotten the Stop Domain Subsidies message: "The City Council recognizes that the City's economic development program allowing project-based incentives for large scale mixed use projects is no longer necessary, and that program element is hereby eliminated." Why do we now need a flawed, hard-to-change charter amendment that prohibits the city from creatively using incentives to get better projects in the future?

Download the charter amendment itself, which says far more than the ballot language.